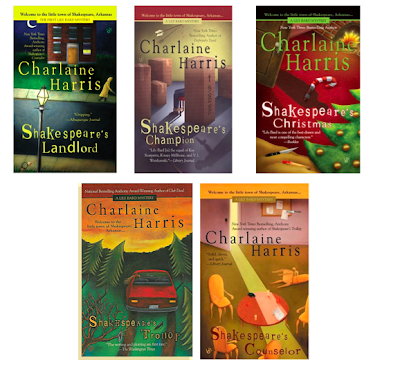 Lily Bard is a loner. Fiercely protective of her independence, she concentrates on her karate skills and her work as the proprietor of a cleaning and errand-running service, and pays little attention to the town around her. When her landlord is murdered, though, she looks like the prime suspect. Uncovering the real killer may be the only way to prove her innocence, and Lily realizes that she must focus on the other residents of tiny Shakespeare. Her job gives her easy access to people's private lives, and she begins to snoop, finding plenty of skeleton-filled closets, and exposing herself to the unwanted attentions of a murderer.

I first read Charlaine Harris’s ‘Lily Bard’ series shortly after discovering her ‘Southern Vampire: Sookie Stackhouse’ books. I wanted to fill the Sookie void between books, and thought reading Harris’s previous works would be a good start. I’m so glad I did, because this series is now one of my all-time favourites.

‘Lily Bard’ is by far Harris’s darkest work. When Charlaine Harris was younger she was the victim of a sexual assault. With this knowledge in mind, it becomes clear that the ‘Lily Bard’ series is perhaps closest to Charlaine’s heart.

Lily Bard has a tragic history. She is a rape survivor. So horrific and awful was the assault, and so dramatic was her escape, that Lily’s name and story were in the news for months following her recovery. Because of the undue media attention Lily effectively went into hiding; finding the small town of Shakespeare, Arkansas on a map and deciding that she would live out her life in solitude. Before escaping into anonymity Lily underwent a physical change; she discovered bodybuilding and set herself the task of making her body into a weapon so that she would never again feel physically threatened.

I love Charlaine Harris. She is a beautiful writer, able to effortlessly flip between fresh prose and acerbic wit. Her stories are often fanciful, but grounded in reality. And her heroines all follow the same mould of being utterly ordinary women living extraordinary lives. Sookie Stackhouse, for instance, is a thoroughly ordinary waitress whose life is irrevocably changed when a vampire walks into her town. Likewise, Lily Bard is a cleaning lady whose loner-existence is changed when her landlord is murdered. Charlaine’s other murder-mystery series, ‘Aurora Teagarden’, has a title character who is a librarian but finds herself thrown into a murder investigation when a friend is found bludgeoned to death.
The contrast of ordinary woman/extraordinary circumstances has more meaning in the ‘Lily Bard’ series than any other of Charlaine’s works. Lily’s extraordinary circumstances can be stretched to the event that brought her to Shakespeare, Arkansas to begin with – her rape. Lily was an ordinary girl when one event changed the entire trajectory of her life.

The ‘Lily Bard’ series is very dark – far more so than Charlaine’s other books, even the most recent Sookie novels. But surprisingly enough the Bard series has a very clear, uplifting message at its centre. The series is ultimately about reconnecting. In the beginning Lily is a determined loner, scarred by the events of her past, Lily is convinced that the key to her well-being lies in never allowing anyone to get close to her. Over the course of five books however, we witness Lily making tentative connections with those around her – she finds romance, love, and friendship and learns that these connections are important to her continued physical and mental recovery. It is a beautiful message – and seems to be Charlaine imparting her own wisdom to victims about how to continue living your life without fear of the past. And although the series has a lot of darkness, it ultimately ends on a high-note and happy ending.

I love this series, not least of all because of Lily Bard herself. Lily is a ballsy, funny, loyal and hard-working woman. When you learn, in explicit detail, the events of her rape your respect for Lily increases ten-fold. In the beginning Lily is defined by the rape. The ordeal shaped her entire life – she moved far away from home (and the pitying looks of family and friends) to live out a life in quiet, safe solitude. She began bodybuilding as a means to protect herself, so fearful that the past would repeat itself. Clearly letting tragedy define who you become is no way to live – and Charlaine articulates this message beautifully through the character of Lily as she evolves throughout the five books. In each book there is a new murder-mystery, and as the local cleaning lady privy to the skeletons in her client’s closets, Lily finds herself at the centre of all of the cases. Through these mysteries Lily is able to measure her own mettle, push herself and discover the levels of her bravery;

“There’s a lot I know about you that you won’t admit about yourself,” he retorted.
I didn’t understand.
“You pull old men out of burning buildings. You saved Jack Leeds’s life and almost died in the act. You’re willing, and brave enough, to risk your life to save others.”
What a misconception! “No, no, no,” I protested angrily.

I also love this series because of the romance at its centre. In book two ‘Shakespare’s Champion’ Lily finds her leading man – Jack Leeds – and trust me when I say he is H-O-T. The Bard series also has one of my all-time favourite secondary characters – Bobo – the son of one of Lily’s cleaning clients who pines after her in the sweetest puppy-love fashion.

If fans of the ‘Sooke Stackhouse’ books come to the ‘Lily Bard’ series with a hope that it will scratch a Sookie itch, they will be disappointed. This is in no way supernatural or urban fantasy. This series is strictly murder-mystery. The only similarities between the books are Charlaine’s love of a good, steamy romance for her heroines, ordinary leading ladies leading extraordinary lives and doing so with tremendous courage and biting wit.
Highly recommend this series.