'Hamilton: The Revolution' by Lin-Manuel Miranda and Jeremy McCarter 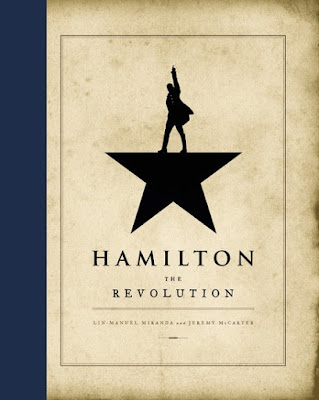 Winner of the 2016 Pulitzer Prize for Drama and Eleven Tony Awards, including Best Musical


Lin-Manuel Miranda's groundbreaking musical Hamilton is as revolutionary as its subject, the poor kid from the Caribbean who fought the British, defended the Constitution, and helped to found the United States. Fusing hip-hop, pop, R&B, and the best traditions of theater, this once-in-a-generation show broadens the sound of Broadway, reveals the storytelling power of rap, and claims our country's origins for a diverse new generation.


HAMILTON: THE REVOLUTION gives readers an unprecedented view of both revolutions, from the only two writers able to provide it. Miranda, along with Jeremy McCarter, a cultural critic and theater artist who was involved in the project from its earliest stages--"since before this was even a show," according to Miranda--traces its development from an improbable perfor­mance at the White House to its landmark opening night on Broadway six years later. In addition, Miranda has written more than 200 funny, revealing footnotes for his award-winning libretto, the full text of which is published here.


Their account features photos by the renowned Frank Ockenfels and veteran Broadway photographer, Joan Marcus; exclusive looks at notebooks and emails; interviews with Questlove, Stephen Sond­heim, leading political commentators, and more than 50 people involved with the production; and multiple appearances by Presi­dent Obama himself. The book does more than tell the surprising story of how a Broadway musical became a national phenomenon: It demonstrates that America has always been renewed by the brash upstarts and brilliant outsiders, the men and women who don't throw away their shot.

I think the first I heard anything about a musical called HAMILTON was on the Book Riot blog last year – one of those typical ‘What to read now that you’ve seen/watched/read…’ recommendation posts. Except it was giving readers recs to quench their thirst for – what sounded like – an American history lesson set to rap music? I guess little subversive mentions of HAMILTON popped up in other cross-reverential ways within pop-culture, but the next I can remember going “Huh?” was when my friend who’d attended Books Expo America came back with all her tales, among them that this musical called HAMILTON was becoming such a thing that a sing-along was organised for teen fans at BEA (I think her commentary was “Check it out on Tumblr!”)

But that was all in 2015, and apart from a quick Wikipedia-read to get brushed up, I put HAMILTON out of my mind … until it came back again in June this year. That was when the Orlando nightclub shooting happened – now known as the deadliest mass shooting in U.S. history – and when some guy called Lin-Manuel Miranda won a Tony award for his scoring on the musical HAMILTON, and read a poem he quickly wrote as part of his acceptance speech;

Wow.
Who is this guy?

A little more research and HAMILTON sounded intriguing, but I distinctly remember walking into the Hill of Content bookshop earlier this same year, picking up a copy of the tome Hamilton: The Revolution and scoffing at the prize/size/entire concept of the show as somewhat baffling. “I’ve listened to the soundtrack,” a helpful bookstore clerk piped up, “and it’s actually really great. I’m obsessed.” I may have raised my eyebrow. I’m not a *huge* fan of musicals (more than once during one I’ve thought/said “why do they have to sing everything?!”) and given that I’ve not been much moved by the soundtracks to the few musicals I have actually seen and enjoyed, I highly doubted I’d get much out of listening to the cast recording of a show I’ve never seen about America’s first Secretary of the Treasury. 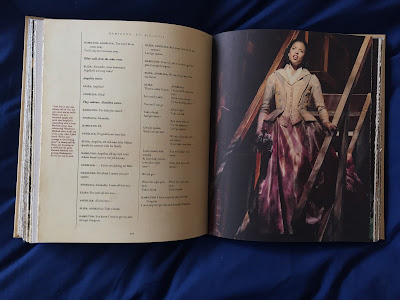 But Lin-Manuel Mirand intrigued me (his poetry, and Twitter account alike) and the global growing obsession with HAMILTON moved me enough to at least purchase the soundtrack on iTunes … and I was done.

Left some not-so-subtle (emailed) hints to the folks that I’d quite like that Hamilton tome at Christmas. Obsessed.

Lucky for me I have kind parents who bought me the book by Lin-Manuel Miranda, and Jeremy McCarter for Christmas (but not without a side-note of sarcasm; “Oh, did the Broadway tickets we put in there fall out? What a shame.”)

And I’ve got to say – if the hype around Miranda and this musical he’s created didn’t feel really real (even before I finally listened to the soundtrack) reading Hamilton: The Revolution cements it for me.

This is at once a thick volume tracking the creation of the musical – from Miranda’s holiday reading of Ron Chernow’s Hamilton autobiography – to the two years it took Lin-Manuel to write the first two songs. And while I’m not a fanatic of many musicals, I was made a fan of a show about the making of musicals – the somewhat doomed 2012 television show Smash about the pitfalls of bringing a musical based on the life of Marilyn Monroe from concept to stage. Hamilton: The Revolution explores the daily grind of making big ideas come to life – right down on chapters dedicated to the staging and lighting of tricky technical storytelling moments. And it’s all – believe it or not – fascinating. 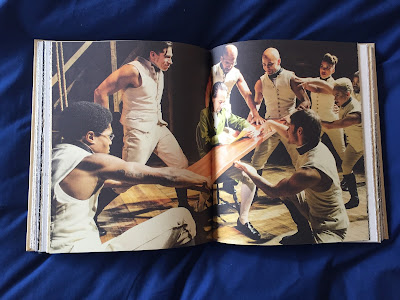 It’s also good value to actually have the lyrics to all the songs laid out (if only to have mondegreens corrected – I thought the line in the opening number went “ruined brides” not “ruined pride” and been thinking that Hamilton’s cousin had made a profession as a charlatan matchmaker or something?!). But it’s really spectacular for the notes in the margins from Lin-Manuel. Everything from Miranda dropping a reference to Jordan Catalano as inspiration for a lyric in Angelica Schuyler’s rapid-fire number Satisfied, to discovering that the inspiration for Dear Theodosia wasn’t so much the arrival of Miranda’s son … but of a stray dog he and his wife adopted while on vacation in the Dominican Republic.

What I got out of reading Hamilton: The Revolution (from cover-to-cover, like the obsessive I have now become) was actually similar to what I enjoyed about reading Big Magic: Creative Living Beyond Fear by Elizabeth Gilbert, bizarrely enough. They both track the creative process from a kernel of an idea to working at it, growing and finishing it; and Gilbert and Miranda also seem to embrace the electrifying power of coincidence and fate lining everything up for a special project… and they pay serious ode to the fact that one doesn’t have to be actively creating to always be working and thinking;

He sequestered himself in a quiet corner of the Public [theatre], composing music, scribbling verses, occasionally wandering the halls. The staff got used to seeing him pacing in his slippers. One day he realized that his inability to grasp the enormity of Alexander and Eliza’s loss wasn’t a barrier to writing the song, it was the song.
“Once I got the line, ‘There are moments that the words don’t reach,’ I had the song,” he says. He wrote it in a day. 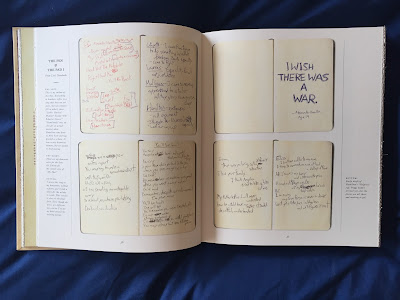 I also quite liked that in Hamilton: The Revolution a few bruises are poked at in chapters focused on the actors in the originating roles. Like how all of the principal actors playing Founding Fathers had to reconcile with themselves as black men, playing influential historical figures that owned slaves. Christopher Jackson who plays George Washington had particularly powerful insights into this, and it’s satisfying to know that there are little tells (as subtle as a bowed head at the right time) that acknowledge this dichotomy throughout the play. 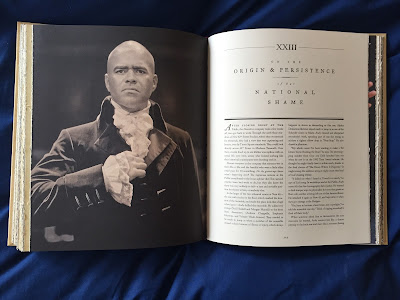 I will say that I came away from my reading of Hamilton: The Revolution … and immediately checked the price of tickets (in both New York and Chicago) and seriously, seriously considered just splurging (especially because it’s a big birthday for me next year). And I honestly think that while HAMILTON will enjoy a long-run (a Phantom of the Opera-long run) in America, I don’t know how it would go elsewhere.

This question momentarily pops up in Hamilton: The Revolution – in a chapter titled ‘An Account of Rapping for the Children Who Will One Day Rap For Themselves’ – in which the musical’s alliance with the Theatre Development Fund in schools is discussed, and Miranda muses on its next stage of life when HAMILTON is licensed for student and amateur productions … they beg the question of how well HAMILTON will go in Asia, Europe and Australia. Is there really worldwide appeal for a musical that is so steeped in American history and has little relevance (particularly for school study) to outside countries?

Putting aside my desperate wish to go and see this musical (without having to take out a bank loan to do so) I really don’t know. It’s certainly taken me a while to warm to the idea of even listening to the soundtrack. BUT … to be fair – there’s not a lot of history-based musicals that have especial relevance to Australia anyway, baby country that we are. And to give you further context to that; in 1770 Captain Cook made the first European landing on Australia's east coast, and a mere six year later The Declaration of Independence was signed in 1776. Just to give you some idea of how much America and Australia’s paths veered at this time … Australians don’t learn about the American Revolutionary War in our core history studies in high school, often because our studies are focused on what was happening in our own country at that time. So certainly – the historic context is a hard barrier to get through for non-Americans, I’d say.

BUT, but, but … and maybe I’m grasping at straws here … but if HAMILTON the Musical was to time an Australia tour just right – were there to be renewed public debate around a Republic referendum? Could you imagine the publicity campaign? If nothing else, I certainly think the Australian Republican Movement should be quietly reaching out to any channels they can to see if a HAMILTON tour announcement would like to join with them in some tongue-in-cheek capacity! 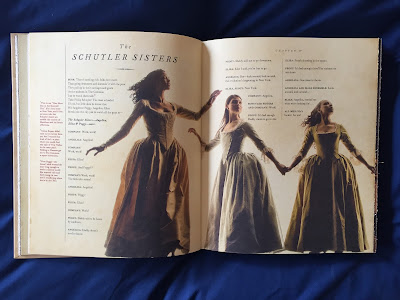 And also; the world is turning again to America to see what happens with their political sideshow, much as they did in 1775... The atmosphere is bizarrely – inversely? – ripe to re-examine the “American Experiment” with Donald Trump and all his “draining the swamp” talk becoming the 55th President of the United States of America. Right down to what Lin-Manuel summarises as the true message of HAMILTON and the revolution is essentially about;

When Lin told the audience at the White House that Alexander Hamilton “embodies the word’s ability to make a difference,” he was thinking of all the good things that language can do.

Hamilton reminds us that the American Revolution was a writers’ revolution, that the founders created the nation one paragraph at a time. But words can also wreak havoc. They also tear down.

… now think about that in the context of Donald Trump’s inane/insane Twitter account. Certainly, History Has It’s Eyes On You has already taken on a new, even more sombre meaning as January 20 looms - and already, the HAMILTON musical cast have contributed their voice to this new phase in American history, becoming part of the narrative in a way I’m sure they could have never foreseen (but won’t shy away from more crucial opportunities in future).

Listening to HAMILTON has been a revolution in itself for me, but reading Hamilton: The Revolution has made me keep thinking and connecting aspects of Lin-Manuel Miranda’s masterpiece to the real world and what the future holds.