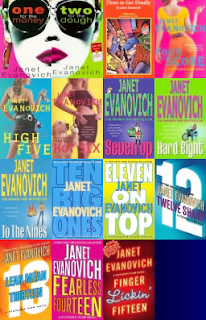 Stephanie Plum is a failed lingerie-buyer turned bounty hunter. She’s a Jersey girl with a soft spot for pineapple upside-down cake. And when she’s not playing ‘choo choo’ with hottie-cop Joe Morelli (she’s the tunnel, he’s the train), she’s trying to keep her libido in check around fellow bounty hunter and possible Batman vigilante, Ranger.

Evanovich’s true talent lies in writing secondary characters. From Stephanie’s gun-nut grandmother Mazur, to her prostitute-turned-secretary-sometimes-sidekick Lulu. Evanovich’s ‘Plum’ series comes to life with these periphery characters who keep Stephanie and readers on their toes.

Ranger is a whole other ball game. For the first-half of the series, Stephanie and Lulu are half convinced that the bad-ass Latino Ranger has his own batcave and dons a mask and cape in his spare time. It isn’t until ‘Twelve Sharp’ that more of Ranger’s past is revealed, adding layers to the man in black. Ranger is an especially delicious love interest for Stephanie because, despite his hard-ass exterior, he proves again and again throughout the series that he does care for Stephanie, in his own way.

One rule of thumb in literature (anything from 'Pride & Prejudice' to Mills & Boon) is that characters have to change – they cannot stagnate, they have to evolve. Because no matter how weird and wonderful the situations you create for them, it all means diddly squat if they don’t learn anything from those situations and have a growth spurt. When Stephanie Plum started out bounty hunting she learnt a few tough lessons very quickly, she got disturbingly used to violence, stalking and having her apartment broken into by a myriad of bad-guys. This all lead to the reader witnessing Stephanie toughen up, and gradually learn than she is a lot stronger than she looks. Half-way through the series she started getting used to seeing the people she loves being put into dire situations, and from there was able to articulate her need for them in her life and her dependency on their love. This was all great stuff, subtly revealed over time. But in the last few books nothing has changed, particularly with regards to her love interests.