'Blood and Chocolate' by Annette Curtis-KLAUSE 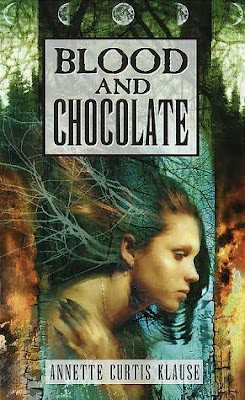 From the BLURB:
Vivian Gandillon relishes the change, the sweet, fierce ache that carries her from girl to wolf. At sixteen, she is beautiful and strong, and all the young wolves are on her tail. But Vivian still grieves for her dead father; her pack remains leaderless and in disarray, and she feels lost in the suburbs of Maryland. She longs for a normal life. But what is normal for a werewolf?
Then Vivian falls in love with a human, a meat-boy. Aiden is kind and gentle, a welcome relief from the squabbling pack. He's fascinated by magic, and Vivian longs to reveal herself to him. Surely he would understand her and delight in the wonder of her dual nature, not fear her as an ordinary human would.
Vivian's divided loyalties are strained further when a brutal murder threatens to expose the pack. Moving between two worlds, she does not seem to belong in either. What is she really--human or beast? Which tastes sweeter--blood or chocolate?
This is one of my all-time favorite YA urban fantasy novels. I love this book because it teeters on the brink of the young adult genre. Klause’s YA writing reminds me of Melissa Marr; because both authors allow their teenage characters to be somewhat sensuous, and sexual – making for a far more realistic read.
Vivian is an enigmatic Lolita-wolf; she knows her worth and flaunts it to her heart’s content. She is a werewolf princess (her father was the packs Alpha before his death) and that puts her in a privileged position. She is beautiful, self-assured and has the young male wolves panting after her.
But for all of Vivian’s self-confidence there is something fractured about her. She is carrying a good deal of guilt over her father’s death, and the unwitting role she played in the events that led her pack to flee West Virginia. Vivian is also coping with her mother, Esmè’s, widowhood. As the previous Alpha female, Esmè is scrambling to reclaim some power in the new pack hierarchy, by any means necessary. Vivian looks on as her mother flaunts herself for the new Alpha, Gabriel, and fends off other females. This is a new dynamic in the mother/daughter relationship, in which the line between adult and child is blurred, and just when Vivian needs her mother most. All of these pressures lead to Vivian’s avid curiosity in human boy, Aiden. Her growing infatuation for him is a safe harbor in a sea of uncertainty as she starts to wish for a simpler, human existence.
Klause’s wolves are deliciously animalistic. They have fights amongst the men to determine the new Alpha – and the females also fight one another for the privilege of being Alpha’s mate. In human form they pursue one another like wolves; aggressively, a flirt-and-retreat mating dance that is fascinating to read for its restrained animalism. We see a group of teenage wolves in their pursuit of Vivian, Gabriel is biding his time for the wolf princess and most interesting is reading Vivian’s approach to courting the human Aiden, as she applies her werewolf-learnt flirtation skills to the school boy;
She drifted inside and saw a bathroom, the tub still full. He didn’t have to bathe for her. She would have devoured his sweat, licked it from him, and rubbed herself against his fragrant body until she became his essence. No matter, she thought. I will make him sweat more.
I love this book so much. It is YA, but there is an underlying, pulsating sexuality throughout the entire book. Vivian’s werewolf side is a euphemism of sorts for teenage hormones, but there’s a deeper message in ‘Blood and Chocolate’. Ultimately the book is about acceptance – accepting events of the past. Accepting one’s mistakes and learning from them. And most of all accepting who you are.
I’m just upset that ‘Blood and Chocolate’ is a one off novel, and not a series. It was ‘adapted’ into a 2007 film of the same name – but that’s all the film and book have in common. It is one of the worst adaptations I have ever seen, and I do not recommend you waste you’re time. But I do recommend this book as an absolute must-read!
5/5
Posted by Danielle at 2:09 PM

Email ThisBlogThis!Share to TwitterShare to FacebookShare to Pinterest
Labels: Annette Curtis-Klause, YA