'And then he kissed her' by Laura Lee GUHRKE 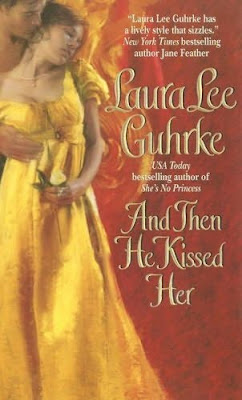 Emma Dove has been Viscount Harry Marlowe’s secretary for six years. She has been a model employee for the famous publisher/editor – going above and beyond the call of duty. Along with her usual secretarial jobs, Emma has been known to buy birthday presents for Harry’s sisters on his behalf, and has even bought gaudy jewellery to give to his discarded mistresses. She is a model employee, and hopes that Harry will reward her diligence by giving serious consideration to publishing her etiquette book. It’s the very least her employer can do for her. But when she discovers that Harry has never read any of the manuscripts she’s left for him, she is furious… and hell hath no fury like a woman scorned.
Harry has to eat his words when Emma’s alter ego, Mrs. Bartleby, becomes the toast of London. Her etiquette column in the Social Gazette becomes gospel to society ladies and girl-bachelors everywhere, and now Harry has to beg her to come back to him…
I really liked this. The premise sounds pretty hum-drum, but the characters and unlikely romance make for a really fantastic read.
Emma is a 30-year-old spinster, dedicated to her work and absurdly concerned with social niceties. Emma writing of customs and etiquette in the 1800’s is fascinating for its ludicrousness.
I really liked Emma, she’s starchy, naïve and prim – but there’s a sweet mix of innocence and independence in her that I found to be a nice contrast. I especially liked the fact that in her relationship with Harry she didn’t drastically change herself to win his affections. She does undergo a change, a very big evolution in fact, but it’s entirely internal and not a Cinderella makeover. The biggest evolution belongs to Harry, who changes his perceptions of his prim and proper secretary as he gets to know her.
Marlowe was a thorough scapegrace, whose only associations with women were of the most dishonourable sort. As his secretary, she regarded his reprobate private life as none of her business, but as a virtuous woman, she had rid herself of any romantic notions about him long ago.
It’s a very sweet, slow romance between Harry and Emma. It’s made even more interesting for the improbability of their ever being anything other than employer/employee. There were moments when I questioned their ever getting together, which is very rare when you know you’re reading a romance.
I cried toward the end, for all of Emma’s fraught emotions. But I thought everything pulled together a little bit too easily – I would have appreciated even more emotional turmoil, sadistic as that makes me sound.
I had a bit of a strange reaction to the ending. I was kind of rooting for Emma to pack her bags and sail away to the far-off lands she’d been dreaming of, rather than end up with her leading man. Weird, I know. But I really thought the central love story was more Emma’s love affair with herself than with Harry. Sure, he opens her eyes and encourages her to enjoy life and not care so much what people think about her, and I did think they made a very sweet couple – but I sort of wanted to read about how Emma took her newfound confidence and completely turned her life around for the sake of self-discovery. Of course, this was a romance and that would never happen.
I did like this. Cuhrke writes beautifully, and she gives an unassuming history lesson of girl-bachelor’s in the 1800’s that is actually very interesting. Her characters are ordinary but lively, and her sex scenes were delicious.
Highly recommend.
4/5
Posted by Danielle at 9:48 PM