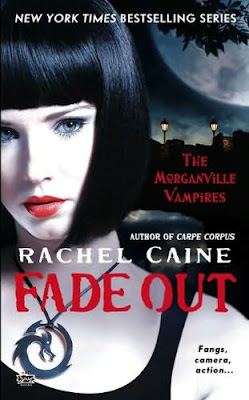 From the BLURB:
Without the evil vampire Bishop ruling over the town of Morganville, the resident vampires have made major concessions to the human population. With their newfound freedoms, Claire Danvers and her friends are almost starting to feel comfortable again.

Now Claire can actually concentrate on her studies, and her friend Eve joins the local theatre company. But when one of Eve's castmates goes missing after starting work on a short documentary, Eve suspects the worst. Claire and Eve soon realize that this film project, whose subjectis the vampires themselves, is a whole lot bigger - and way more dangerous - than anyone suspected.

I am completely, obsessively in love with this series. It’s one of my all-time favourite YA series, and one of the best urban fantasy series I have ever read. ‘Fade Out’ is the 7th book in the Morganville Vampires series, and is just as good as the previous 6…

So much was resolved in book 6, ‘Carpe Corpus’ – the villains that had been plaguing Morganville for three books previously were all put down, and so many relationship issues were addressed that I wouldn’t have been surprised if Rachel Caine had declared ‘Carpe Corpus’ the final book in the series. ‘Fade Out’ feels like a pit stop on the way to the next ‘big bad’ story arc, but that doesn’t mean it’s not as good as previous books.

‘Fade Out’ actually has two villains. First is steampunk master computer, Ada, who is convinced that Claire is trying to usurp her power and intends to kill her in retaliation. Then there’s rogue vampire, Morley, who emerges from the shadows and demands a confrontation with Morganville founder, Amelie. Both Ada and Morley feel like minor characters in a much bigger picture – there will no doubt be major repercussions in future books where these two are concerned, and ‘Fade Out’ is a beautifully constructed cliff-hanger for the next book in the series, ‘Kiss of Death’ (May 4th 2010).

Mortal danger was nothing new around their unofficial four-person frat house. In fact, mortal danger didn’t even merit a full-fledged scream these days. More of a raised eyebrow.
I love that Rachel Caine mixes up physical evils with internal conflicts. Each of the four protagonists is constantly dealing with their own issues, and the mix of internal/external means that the drama stakes are constantly raised, but you also have enough emotional investment in the characters to want them to survive the drama. Michael, for instance, is still coming to terms with his new vampire half – he’s hoping that his friends (especially Eve) can accept that he has changed, but love him regardless. Shane is always battling with his guilt – guilt over his sister’s death, mother’s suicide and father’s fall from grace. Eve is dealing with her own disenfranchisement in the Morganville community, desperate not to let her past dictate her future. And Claire is coping with low self-confidence. In ‘Fade Out’ an ex-flame of Shane’s has Claire questioning their relationship and wondering what Shane sees in her.

‘Carpe Corpus’ had a small relationship cliffhanger for Shane and Claire, and it’s unfortunately not directly addressed in ‘Fade Out’. There was some business about a ring being given, but Caine makes no mention of this. Apart from that though, it’s fascinating to read the progression of Claire and Shane’s relationship – there are cutesy moments, but Caine also deals with some very pertinent issues where teen romances are concerned.

Caine’s writing reads like a movie script. She writes action beautifully – not so much detail that you get bogged down, fast pace and great visualisation. She really does leave you on the edge-of-your-seat plenty of times throughout; her writing leaves you feeling exhilarated. The entire series has a very cinematic quality to it – and I can understand (and appreciate) why this series has been optioned for TV/film rights.

I loved ‘Fade Out’, and I adore the ‘Morganville Vampires’ series. I can’t wait for ‘Kiss of Death’! The suspense is killing me! 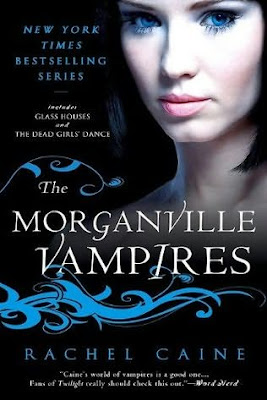 If you haven’t read ‘The Glass House’ yet, you seriously need to prioritize! Caine has recently released the first of several omnibus novels – ‘The Morganville Vampires’ includes the two books ‘The Glass House’ and ‘Dead Girls’ Dance’.
Posted by Danielle at 7:16 PM