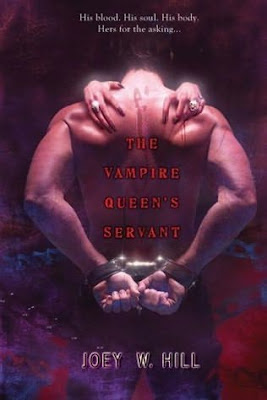 From the BLURB:
Lady Elyssa Yamato Amaterasu Wentworth is a centuries-old vampire who's been given a new servant-Jacob, a total alpha male unaccustomed to submitting to any woman's wishes. What really binds Jacob to her are not her sensual midnight hungers, but something far more provocative. It stirs her blood, renews her life, and awakens her soul like only true love can. The passion between Elyssa and Jacob yields something else unexpected-a shared history that reaches back through the centuries and is fated to challenge their destiny like nothing ever will again.
In most urban fantasy books starring vampires, there is a trend for protagonists to be female, human and novices to the vampiric world. Often the protagonist will be guided through this new, supernatural world by a strong Alpha vampire who is usually male. Most authors imbue such Alpha male men with two-sided personalities, at once brutish and imposing, but also capable of tender love and fierce protection.
There is hardly an instance of a female Alpha vampire in urban fantasy being a heroine – these fanged femme fatales are more likely to be villains or secondary characters, but never protagonists.
‘The Vampire Queen’s Servant’ takes a very different tact by casting a vampire Queen as the book’s leading lady.
Imagine a book that offers insight into the history and working cruelty of some of your favorite urban fantasy she-devils: Queen Sophie-Anne Leclerq (Charlaine Harris ‘Southern Vampire: Sookie Stackhouse’), Belle Morte (Laurell K Hamilton ‘Anita Blake’) or Queen Andias (Laurell K Hamilton ‘Merry Gentry’).
It’s an interesting new angle for the vampire story; casting a traditionally villainous character as the lead. Unfortunately Hill hasn’t really imbued her protagonist, Queen Lyssa, with cruelty so much as misunderstanding. I admit, there probably wouldn’t be much appeal in reading a book about someone like Laurell K Hamilton’s Belle Morte who has a predilection for bloody orgies and flogging – but it would have been interesting to read a book about how someone like that could become so despicable.
Hill has given Lyssa a very sad past – her vampire husband started a slow descent into immortal madness and took his growing insanity out on his wife, through cruel sexual sport and disgusting foreplay. But Lyssa doesn’t really seem to have been psychologically impacted by those memories. At times she does flip between compassion for her vampire servant, Jacob, and then mind-boggling distance. And sometimes her inner monologue about how she’d like to dominate him is a little disturbing;
She missed taking alpha males. She enjoyed the fight, their resistance, the sweet taste of heated blood. The perception, if only for a moment, that the hunt would be a challenge. A vampire didn't survive by being ruled by her compulsions, any more than a woman survived by being consumed by her most private desires.
But for the most part she is a very tame character. She doesn’t hold a candle to the sadistic inner workings of Queen Andias or Belle Morte. And while Lyssa claims to be a very dangerous vampire; she is clearly very smitten with Jacob from the get-go, so we never really witness her supposedly ‘cruel’ side, thereby making her a somewhat meek, docile little vampire ‘Queen’.
I had three really big problems with this book.
The first is the author’s penchant for writing lengthy paragraphs detailing the character’s inner thoughts and feelings. This wouldn’t have been so unbearable, except that my second complaint has to do with the lack of plot. There’s no action or suspense, no high stakes leaving you on the edge of your seat. The whole story is about Lyssa agreeing to take Jacob on as her servant – and since she is intrigued and aroused by him from the moment they lock eyes, there’s little to no doubt that she will agree to take him on board. The only ‘action’ in the book are the sex scenes, beyond that nothing actually happens.
My third complaint is a huge gaping back-story. Jacob’s brother is a vampire hunter – but this is only ever mentioned in passing, leaving a huge gaping ‘WTF?’ about how his brother feels about Jacob becoming servant to the creatures he hunts. Halfway through the book it’s revealed that Jacob is the reincarnated soul of two ‘warriors’ Lyssa has met previously in her 1,000 years of life. Jacob was apparently once a samurai who saved Lyssa’s life when she was a child. Centuries later he was also a medieval knight who saved Lyssa’s life a second time when vampire hunters attacked her. Both of these tales are begging to be told through flashback or prologue – but Hill instead has them being recounted matter-of-factly, flat on the page. If there had been a prologue describing these events, maybe it would have made Lyssa and Jacob’s love for one another more convincing – instead we are to believe that a 1,000 year old vampire Queen has simply fallen for her human servant after only a few weeks.
I’ll admit, the sex scenes are pretty hot and smutty – but they’re not enough to make up for boring characters, sloppy back-story and no action in the plot.
2/5
Posted by Danielle at 12:51 PM