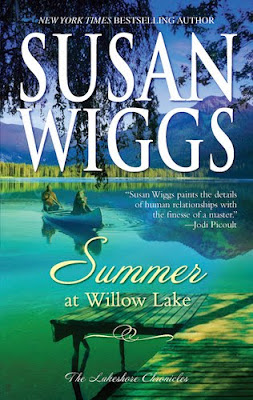 Real estate expert Olivia Bellamy reluctantly trades a trendy Manhattan summer for her family's old resort camp in the Catskills, where her primary task will be renovating the bungalow colony for her grandparents, who want one last summer together filled with fun, friends and family. A posh resort in its heyday, the camp is now in disarray and Olivia is forced to hire contractor Connor Davis -- a still-smoldering flame from her own summers at camp. But as the days grow warm, not even the inviting blue waters of Willow Lake can cool the passions flaring or keep shocking secrets at bay. The nostalgic joy of summers past breathes new promise into a special place and people . . . a promise meant to last long after the season ends.

I really, really wanted to like this book. Reading the blurb, I thought a contemporary romance based around a woman’s summer camp fling would be a fun, romantic read.

For one thing, Wiggs annoyingly jumps around in time. The book opens in present day, with Olivia Bellamy returning to her grandparents summer camp site to make renovations. While stuck up a flagpole (not a figure of speech… she is literally stuck up a flagpole), Olivia discovers that the man she’s hired to do renovation work is none other than Connor Davis – the first boy she ever loved, who she first met at summer camp when they were 12.

Then the book jumps back in time to 1991, to depict Olivia and Connor’s first meeting. Then we jump back to present day – and then Wigg’s propels us back in time to 1977 to when Olivia’s father was a teenage camp counselor experiencing his first summer fling. And so on and so forth – back and forth – in an increasingly annoying and jerky flashback/present switcheroo.

On top of the frustrating change in time frame, Wiggs has made a fatal mistake by including too many narrators. We get Olivia’s monologue, Connor’s, Olivia’s young cousin Daisy, Connor’s young half-brother Julian, Olivia’s father…. The multiple POV’s coupled with the jumping timeline makes for an increasingly frustrating read. It also means that you’re never completely invested in any one character or storyline.

I thought ‘Summer at Willow Lake’ would follow a similar structure to Lisa Kleypas’s ‘Sugar Daddy’ – in which we read about the protagonist in her younger years for the first half of the book, and then jump ahead to present day and our now adult protagonist. Instead Wiggs jumps back and forth in her character’s personal timelines as they slowly reveal more about the impact childhood had on their current lives.

I could have really liked the Connor/Olivia rekindled romance, but I could never get a firm grip on them. Olivia keeps mentioning (in present day) how Connor broke her heart when they were teenagers – and then Wiggs will jump back to the 90’s and slowly reveal the events leading up to Olivia’s heartbreak. But the revelation is so slow and so obvious that I found myself really not giving a flying fig.

I really wanted to like this book – it’s the first in a series called ‘Lakeshore Chronicles’, currently with 6 books and a 7th book to be released in 2010. Jodi Picoult (a beloved author of mine) raves about Susan Wiggs and has reviewed several of her books. Supposedly Wiggs is a master storyteller of the human heart, specializing in complicated human relationships. I admit, a few of Wiggs’s insights into love are deep and beautifully articulated;
“There’s a kind of love that has the power to save you, to get you though life,” her father said. “It’s like breathing. You have to do it or you’ll die. And when it’s over, your soul starts to bleed, Livvy. There’s no pain in the world like it, I swear. If you were feeling that now, you wouldn’t be able to sit up straight or have a coherent conversation.”
But for the most part I could not stand this book. The flashbacks/multiple POV’s are so annoying that I seriously contemplated giving up on the book many times while reading. Not even the romance is particularly sparky (or smutty) and it’s hard to invest in it because of all the jumping around in time and voice.

Don’t bother with this series.