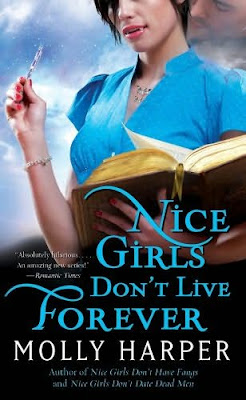 From the BLURB:
Nothing sucks the romance out of world travel like a boyfriend who may or may not have broken up with you in a hotel room in Brussels. Jane Jameson’s sexy sire, Gabriel, has always been unpredictable. But the seductive, anonymous notes that await him at each stop of their international vacation, coupled with his evasive behavior over the past few months, finally push Jane onto the next flight home to Half Moon Hollow — alone, upset, and unsure whether Gabriel just ended their relationship without actually telling her.
Now the children’s-librarian-turned-vampire is reviving with plenty of Faux Type O, some TLC from her colorful friends and family, and her plans for a Brave New Jane. Step One: Get her newly-renovated occult bookstore off the ground. Step Two: Support her best friend, Zeb, and his werewolf bride as they prepare for the impending birth of their baby . . . or litter. Step Three: Figure out who’s been sending her threatening letters, and how her hostile pen pal is tied to Gabriel. Because for this nice girl, surviving a broken heart is becoming a matter of life and undeath...
Molly Harper’s debut ‘Jane Jameson’ was, without a doubt, my favorite new series of 2009. I love these books, and I have a serious fictional girl-crush on protagonist Jane Jameson. The third (and possibly last) book in the series, ‘Nice Girls Don’t Live Forever’ definitely delivers and maintains Harper’s winning-streak.
Molly Harper’s writing is quick, zany and completely infectious. The closest comparison I can think of is to dearly departed television series ‘Gilmore Girls’. Jane’s mouth runs a mile-a-minute; spouting out witticisms, pop culture references and Jane-isms that make her entirely endearing and hilarious. I especially loved this Buffy-reference, cementing Jane as my No.1 fictional best friend;
“Zeb said we should bring over the first season of ‘Buffy the Vampire Slayer’, but Andrea thought you’d get all depressed,” Jolene told me.
“Yeah, because what’s the point of watching ‘Buffy’ if you’re not watching the second-season episodes with Spike in them?” I asked, uncorking the bottle of wine. Andrea poured me a large glass. “Hmmm. I wonder if it would be unethical for me to turn James Marsters? And then force him to fake the Cockney accent? And then make him my love monkey?”
If Harper’s series has a flaw, it’s that the plot/character balance is out of whack. Not a whole lot happens with storyline – that was true of ‘Nice Girls Don’t Have Fangs’ and ‘Nice Girls Don’t Date Dead Men’ – and it happens again in ‘Nice Girls Don’t Live Forever’. Harper initially sets up a really interesting premise regarding Gabriel’s shady past – but that plot is pretty quickly pushed aside, to be mentioned in passing throughout the book but never made the sole focus. Instead Harper prefers to concentrate on the lives of secondary characters as they impact Jane and as Jane herself deals with her new career path and wacky family antics.
To be honest, Harper’s writing is so funny and so damn *good* that you don’t really notice the lack of forward plot momentum until you’ve finished the book and try to remember the in’s and out’s of the storyline. It’s only after the fact that you realize not a whole lot actually happens in the book.
Regardless of any shortcomings in plot, I am completely crazy about this series. I was really upset to discover that Molly Harper is only contracted for the three ‘Jane Jameson’ books. Unless her contract is extended ‘Nice Girls Don’t Live Forever’ could very well be the last we hear of Jane Jameson. I really, really hope we get more wacky Jane adventures. I love these books so much that Molly Harper is now an instant pre-order for me.
To be honest, the ‘Jane Jameson’ books aren’t reinventing the ‘Urban Fantasy’ wheel. The storyline is reminiscent of MaryJanice Davidons’s ‘Queen Betsy’ series, with a hint of Charlaine Harris’s ‘Sookie Stackhouse’ or Kerrelyn Spark’s ‘Love at Stake’ books. But Molly Harper’s voice is so distinctive, infectious and down right brilliant that she sets herself apart from the rest.
If you haven’t yet read the ‘Jane Jameson’ books please, please, please give them a go. You will not be disappointed, and you might even start spouting Jane-isms.
5/5
Posted by Danielle at 10:13 AM