'The Piper's Son' by Melina Marchetta 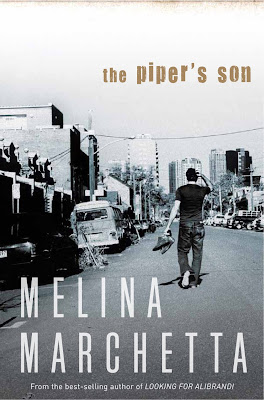 received from the publisher

Thomas Mackee wants oblivion. Wants to forget parents who leave and friends he used to care about and a string of one-night stands, and favourite uncles being blown to smithereens on their way to work on the other side of the world.  But when his flatmates turn him out of the house, Tom moves in with his single, pregnant aunt, Georgie. And starts working at the Union pub with his former friends. And winds up living with his grieving father again. And remembers how he abandoned Tara Finke two years ago, after his uncle’s death.  And in a year when everything's broken, Tom realises that his family and friends need him to help put the pieces back together as much as he needs them.

This is Melina Marchetta’s follow-up to her 2003 Young Adult novel ‘Saving Francesca’.
It’s been five years since the events in ‘Saving Francesca’, and this time around the story focuses on Thomas Mackee and his family.

The Mackee’s life changed forever after the death of youngest son, Joe, in the 2005 London Underground bombing. Their world was suddenly segregated into ‘before London’ and ‘after London’ and the fracture of past and present as the book observes the ripple effect that grief has on families and relationships.

The death of Tom’s uncle in the bombing had his alcoholic father seeking comfort at the bottom of a bottle. Tom’s aunt Georgie sought physical comfort with the man who cheated on her years ago, and she finds herself pregnant as a result. Tom closed himself off from the world; his friends, family and the girl he loved.

The book is set in 2007 and the Mackee’s are still reeling after Joe’s death. Tom’s family are broken and scattered in the wake of their loss; his mother and sister moved to Queensland when his dad hit the bottle and shortly after his uncle Joe’s death Tom’s father vanished. But just as a tragedy tore the Mackee’s apart, old heartbreak is bringing them back together. A mass unmarked grave is being exhumed in Vietnam, and one of the bodies is thought to be Thomas Finch Mackee – the family patriarch who was drafted but never returned.

Melina Marchetta is one of Australia’s most popular YA writers. Her books have won the prestigious ‘Book Council of Australia’ award and her first novel was adapted into a movie in 2000. ‘The Piper’s Son’ is very different from Marchetta’s other YA books – mainly because it straddles the line between YA/Adult fiction.

Marchetta is definitely writing to her original audience – those Aussie Gen-Y kids who were the first to read and love ‘Looking for Alibrandi’ and ‘Saving Francesca’. ‘The Piper’s Son’ is about them – those who are more ‘adults’ than ‘young adults’ nowadays and living in the limbo after High School. Like the characters in this book, that original audience are now; in University, graduated, dropped-out, aimless, driven or any number of in-between. There’s a little something here for everyone who grew up with Melina Marchetta’s books.

‘The Piper’s Son’ will also appeal to an older generation who may have missed out on the hubbub of Marchetta’s record-breaking YA fiction. This book does have a mature voice and is narrated by both older and younger characters. The book is also dealing with an intense, far-reaching subject matter that will resonate with the young and old alike.

Grief is at the core of this book. Australian identity is built around tragedy – starting with Gallipoli and evolving in Vietnam and most recently with Black Saturday. It is the measure of our spirit, the way our country stands in the face of adversity. Marchetta deals with two devastating historical events – the 2005 London underground bombing (which we cannot claim as our own but is close to home) and Australia’s involvement in Vietnam. Marchetta doesn’t over-analyse these events, but she does acknowledge them as having played vital roles in the lives of Australian families. And the Mackee’s are a wonderful blueprint for the typical Aussie family – Irish Catholic blue-collar workers who all live shoulder-to-shoulder in the Sydney suburbs. Among themselves they’re loud, bullying and judgmental – but they’re also fiercely loyal, protective and affectionate.

Although ‘The Piper’s Son’ has a heavy theme of grief, Marchetta still writes her trademark wit and peppers the book with cultural references. These references are ‘hit-the-nail-on-the-head’ for their observations of Australian life and times, like Tom Mackee claiming to be a member of the club; ‘Survivors of childhood subjugation to watching The Bill’. Marchetta evokes a picture of Australia, through her descriptions of the Sydney Suburbs as they speed by the train line and the Paul Kelly soundtrack that seem to accompany her scenes.

I was excited for this book, and to become reacquainted with characters I met in ‘Saving Francesca’. But it’s the new characters Marchetta creates that I fell in love with. Aunt Georgie was a combustible and wonderful narrator – she’s 42 and pregnant to the man who cheated on her seven years ago; she is constantly swinging between being petrified, ashamed and ecstatic. Georgie also writes e-mails to her dead brother, in which she writes all the things she can’t say out loud.

‘Saving Francesca’ alumni also return for this book – Francesca Spinelli, Will Trombal, Justine Kalinsky and Tara Finke. We met these characters in 2003, and it’s incredibly comforting to know that they’ve all carried on with their fictional lives and remained firm friends.

But of course the stand out character in this book is Tom Mackee. When we meet him, Tom wants oblivion. It’s as though he’s found solace in grief – it gives him an excuse to be a fuck-up who smokes pot all day, gets laid when he can (by whoever he can) and let the hours, days and months bleed into one another. Tom is frustrating to read, especially when he has flashes of sincerity that prove him to be better than he’s acting. But that’s the beauty of Marchetta’s characters. They are real and imperfect and I love them.

It may all seem doom and gloom – but ‘The Piper’s Son’ has real heart. Grief is at its centre, but the book isn’t overwrought with tragedy. You’ll definitely cry, but in between you’ll laugh out loud and enjoy watching these characters figure out their lives in the wake of catastrophe.

‘Saving Francesca’ was published in 2003, so its been a good 7 years since we last met these characters. It’s a testament to Marchetta’s work that ‘The Piper’s Son’ doesn’t feel disjointed, but rather a logical extension of ‘Saving Francesca’. For Marchetta fans, this follow-up book is like catching up with old friends down at the local; we know and love them, we’ve missed them and now they’ve returned, just like we've always known they would. 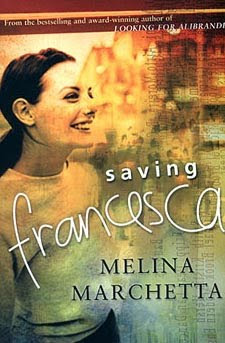