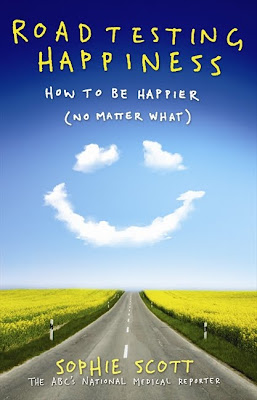 Received from the publisher
Sophie Scott’s book starts with a very relatable and moving introduction from the author. Scott’s search for happiness began when her mother lost her battle with cancer. The death was a huge blow, and in an effort to restore her equilibrium and well being, Scott embarked on a journey of the mind/body/soul to try and find a pathway to the illusive ‘happiness’.
What follows is her journey as she investigates a number of different perspectives and avenues, all with the goal of finding out ‘what exactly is happiness?’
Through 7 chapters Scott tries to tackle the BIG question. She looks for quantifiable measurements of happiness as well as scientific and spiritual explanations. Scott also observes the flipside – unhappiness – by investigating the pitfalls to happiness (stress, grief etc). She explores sleep, sex, diet and a plethora of other triggers of ‘happiness’.
Scott also studies popular and recent psychology theories – cognitive behavioural therapy, concepts of ‘flow’ and meditation, to name but a few.
The quest for happiness is sometimes a philosophic one, other times the book observes scientific methods, as well as spiritual and positive thinking. Each chapter includes a ‘lesson learned’ – interviews and case studies supporting Scott’s findings or simply adding a new and thoughtful layer to her investigations.
There’s an interactive component too, as the book includes journals and questions for readers to write and answer in. This promotes the reflective nature of Scott’s journey, and is a thoughtful addition to the book.
Throughout the book Scott keeps a reflective, light-hearted tone. The subject matter can be quite heavy, but Scott’s ultimately positive writing and determined investigations stop the book from becoming weary. And ultimately this is a book about happiness – recognizing, getting and appreciating it.
5/5
Posted by Danielle at 7:45 PM