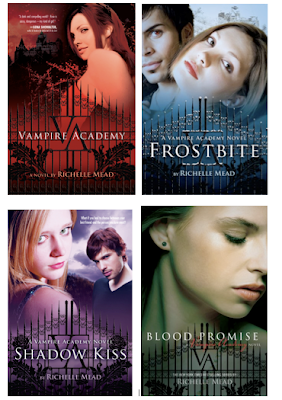 St. Vladimir’s isn’t your typical boarding school. It’s here that the next generation of vampires, also known as ‘Moroi’, are educated. Vladimir’s is also where the Moroi’s half-human bodyguards, called ‘Dhampir’s’, are trained to defend their full-blooded vampire charges.
Rose Hathaway and Lissa Dragomir are the daredevil darling’s of St. Vladimir’s. Lissa is the Dragomir princess – a mortal vampire, the last of her royal line, with a strong bond of earth magic. Rose is her Dhampir bodyguard, and best friend since childhood – and it is her job to protect Lissa from the evil and immortal ‘Strigoi’ vampires.
When we first meet them, Rose and Lissa are on the run from St. Vladimir’s – convinced that someone is out to kill Lissa, and the school isn’t safe enough to protect her. But hot on their heels is Dhampir bodyguard and Vladimir teacher – Dimitri Belikov, assigned with the mission to drag both girls back to school and teach Rose a thing or two about being a guardian to the Moroi.
This is one of my all-time favourite YA serials. ‘Vampire Academy’ was my first Richelle Mead read, and I absolutely fell in love with her story and writing. From ‘Vampire Academy’ I went on to read (and LOVE) her ‘Georgina Kincaid’ and ‘Dark Swan’ series.
I read ‘VA’ soon after discovering Stephanie Meyer’s ‘Twilight’ series. I was itching for some more vampire teen romance – and at the time ‘Vampire Academy’ (first book published in 2007) was one of the only other series that fit the bill - the other was Rachel Caine’s ‘Morganville Vampires’ (first published in 2006).
I love Mead’s series because I think she really ‘gets’ teenagers. This may be a genre-book about vampires, but her character’s go through lots of typical and relatable teen problems, among them: best friends drifting apart because of new boyfriends, feelings of estrangement from a career-obsessed parent, breaking a boys heart because he likes you more than you like him, and crushing on an unattainable ‘idol’.
The last one is my favourite. Rose and Lissa each have their own ‘HEA’ love story – but it’s Rose’s romance that has fans frothing at the mouth. From book #1, Rose feels a certain tingly-toes infatuation for her teacher, Dimitri Belikov. Rose is 17 to Dimitri’s 24 – but that doesn’t change the fact that he’s tall, dark, Russian and the type of guardian Rose aspires to be.
Mead keeps things PG-13, as per the YA genre, but the Rose/Dimitri pairing is quite a mature one. I think Mead appreciates the fact that not all teenagers follow paint-by-numbers romances – sometimes our first relationships are tricky, complicated, unrequited or questionable. Mead does an impressive job of rolling all that angst into one Rose/Dimitri shipperdom.
Mead saves Rose/Dimitri from becoming creepy and inappropriate because she really develops their romance. Their relationship is an evolution– and while readers witness their unfurling feelings, she also reveals their true characters. Rose is a sharp-tongued, tough-as-nails sweetheart. She is a completely loyal friend to Lissa – the type of friend who ‘has your back’ and will gladly flatten anyone who raises a finger or bad word against you. But Rose also dons pretty impressive armour – her mother is a famous Dhampir guardian who all but abandoned Rose to pursue her body-guarding career. Rose also has the weight of a friendship on her shoulders – she is Lissa’s future guardian, and with Lissa being the last Dragomir princess Rose definitely feels the pressure of her future guardianship. All of this amounts to Rose suppressing a lot of her inner turmoil and donning a ‘brave face’. Except with Dimitri. With Dimitri Rose can be herself – share her fears and lament the price she has to pay always being in Lissa’s shadow.
I squeezed my eyes shut. “You shouldn’t. I’m going to become something terrible. I might already be something terrible.” I thought back to past behaviours, the way I’d been snapping at everyone. The way I’d tried to scare Ryan and Camille.
Dimitri pulled away so that he could look me in the eyes. He cupped my face in his hands. “You aren’t. You won’t,” he said. “I won’t let you. No matter what, I won’t let you.”
One of the best things about Mead’s teenage characters is the fact that she lets them be their own heroes. More often than not, her characters will save their own butts and be their own saviours. She really gives her YA readers some characters to look up to, and be inspired by.
One of the best things about ‘VA’ is the microcosm universe Mead has created. She’s blended vampiric gothic myth with modern teen romance in a most impressive concoction. She uses vampiric etymology and origin concerning the Dhampir/Stigoi/Moroi, but St. Vladimir’s is quite an inspired YA setting. Move over Hogwarts – there’s more shenanigans in the halls and dorms of Vladimir’s than in the entire enchanted castle.
‘Vampire Academy’ is a teen vampire series rivalled only by Stephanie Meyer’s ‘Twilight’ saga. And to be honest, if that rivalry was based on ‘content’ over ‘commercialism’ – ‘VA’ would win, hands down. Richelle Mead is a phenomenal writer. She writes action scenes like Tarantino, and romances which adults and young adults alike can sink their teeth into and get invested in.
Book #5, ‘Spirit Bound’, comes out 18 May. Book #6 ‘Last Sacrifice’ comes out 7 December and marks the conclusion of ‘Vampire Academy’… but a spin-off is on the way. At the moment this series is narrated by Rose – but ‘Last Sacrifice’ will mark the end of her series, and kick-off a spin-off narrated by a new character. Yay!
If you haven’t already, I strongly suggest you get on the ‘Vampire Academy’ bandwagon.
5/5
Book #5 'Spirit Bound' 18 May 2010 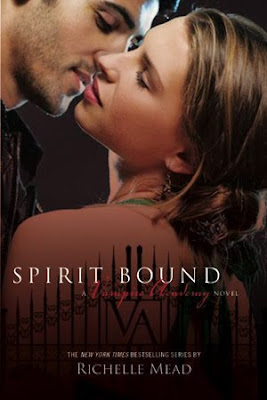