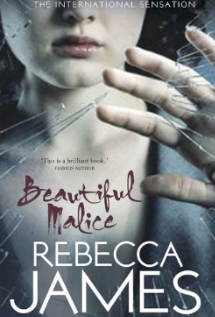 'Truth or dare?' she asks.
I hesitate. I have so many secrets, so many things I don't want to reveal, but this is only a game, only a bit of fun. 'Truth,' I say finally. 'I can imagine one of your dares, and I don't fancy running down Oxford Street naked tonight.'
'Truth,' Alice says slowly, drawing out the vowel sound as if she's savouring the word. 'Are you sure? Are you sure you can be completely honest?'
'I think so. Try me.'
'Okay.' And then she looks at me curiously. 'So. Were you glad, deep down? Were you glad to be rid of her? Your perfect sister? Were you secretly glad when she was killed?'

Katherine has moved away from her shattered once-perfect family to start a new life in Sydney. There she keeps her head down until she is befriended by the charismatic Alice, and her life takes her in new directions. But there is a dark side to Alice, and as we learn the truth of Katherine's sister's death and Alice's background their story spirals to an explosive finale.
If you only read one book this year, let it be ‘Beautiful Malice’.
Oh. My. God. I read this in one sitting, cover to cover, because I literally could not tear my eyes away.
The story opens with these ominous words:

I didn’t go to Alice’s funeral.

An older Katherine narrates the novel, recounting the events that changed her life. She is at once in the present day, grown-up and with a child of her own – and with hindsight and insight she tells the story of her life in Melbourne, on the day her sister died.
But the crux of the story is set when Katherine is 17. She is living in the aftermath of her sister’s suspicious death, which led to a media-furore and prompted Katherine to flee Melbourne and seek anonymity and refuge in the Sydney suburbs. It is here, at Drummond High, that Katherine meets and befriends Alice.
Beautiful Alice – with blonde hair, sun-kissed skin and laughing blue eyes. Through Alice, Katherine meets and bonds with Robbie, a handsome young man who is besotted with Alice despite her reluctance to commit.
The three of them form a close friendship and Katherine starts to live her life once more, without the black cloud of despair that’s been hovering since Melbourne and her sister’s death.
But pretty soon the cracks begin to show. Alice is not a well girl. She lives her life in extremes and is constantly bouncing from one end of the emotional spectrum to the other. She can be a lovable, easy-going and loyal friend one minute, or a conniving, narcissistic menace the next. At first Alice’s egocentric behaviour seems to be that of any spoilt teenager – perhaps maximized because of Alice’s model-like beauty and the fact that she is all but emancipated from her parents. But as the story progresses Katherine, and readers, see that Alice’s fissure runs much deeper.

Alice is my friend, after all, and it’s not fair of Phillipa to judge her so harshly, so quickly.
“She’s not that bad,” I say. “She’s got some fantastic qualities. She can be incredibly generous and charming when she wants to. She can be a lot of fun.”
“So could Adolf Hitler,” she says.

Rebecca James has written such a chillingly captivating villain in Alice that even though she makes your skin crawl, you can’t help but be utterly captivated by her. Much in the same way Katherine and Robbie can be enchanted by Alice’s ‘joie de vivre’ one moment, and disgusted by her narcissism the next.
While reading this I was literally gasping out loud, shaking my head and muttering to myself – I couldn’t believe some of Alice’s actions, or how far she would go… It got to the point where, even though she sickened me, I was bizarrely fascinated with Alice. She is one of the best female villains I have ever read. Think Annie Wilkes in ‘Misery’, Joan Crawford in ‘Mommie Dearest’ or Sharon Stone in ‘Basic Instinct’ and you’ll start to get an idea of what kind of she-villain Alice is.
‘Beautiful Malice’ is a thriller/suspense YA novel, but the book is accessible to an older readership, particularly because of the more sinister underpinnings of the story. This is not a comfortable YA book – but it does make for addictive reading. The plot is dark and twisted, and Alice even more so. But Rebecca James is a damn good storyteller – and once she starts weaving this tangled web you won’t be able to stop until you reach the final, chilling end.
I can’t praise this book enough. ‘Beautiful Malice’ is yet another shining example of the Young Adult genre’s growing popularity and widening readership. The genre is no longer just for the audience of its namesake – adults are reacquainting themselves with a genre that is growing more sophisticated and garnering more publicity than books in its adult counter-part. ‘Beautiful Malice’ is one book that will appeal to young adults and adults alike for its dark themes and gripping plot.
You absolutely, positively, without a doubt MUST read this book. Seriously!
5/5 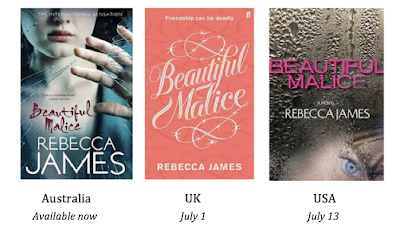 Rebecca James
‘Beautiful Malice’ was released in Australia a few weeks ago, to much critical and commercial acclaim. And as much press as the book is receiving, its author has a Cinderella story that’s equally heart-warming.
Rebecca James shopped her ‘Beautiful Malice’ manuscript around to umpteenth Australian literary agents and publishing houses – and was rejected by all of them. On a whim, she sent ‘Beautiful Malice’ off to UK agents Conville & Walsh who contracted her immediately and shopped the manuscript around at the 2009 Frankfurt Book Fair… where Rebecca James went on to sell the book for a $1 million advance!
Now, this underdog story is at once awe-inspiring and cringe-worthy. What on earth is wrong with Aussie agents and publishers that they let this talented author slip through their fingers?
Her website lists a new title called ‘Cooper Bartholomew is dead’ on her website – but there’s no synopsis or release date. Regardless, you better believe I’m automatically-buying whatever Rebecca James writes. From one book I’ve already decided she’s my new favourite author!
Posted by Danielle at 6:49 PM