'Bring on the Night' WVMP Radio #3 by Jeri SMITH-READY 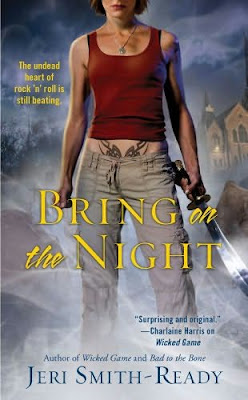 WHAT'S BLOOD GOT TO DO WITH IT?
Recovering con artist Ciara Griffin seems to finally have it all. A steady job at WVMP, the Lifeblood of Rock 'n'™ Roll. A loving relationship with the idiosyncratic but eternally hot DJ Shane McAllister. A vampire dog who never needs shots or a pooper-scooper. And after nine years, it looks as if she might actually finish her bachelor's degree!

But fate has other plans for Ciara. First she must fulfill her Faustian bargain with the Control, the paranormal paramilitary agency that does its best to keep vampires in line. Turns out the Control wants her for something other than her (nonexistent) ability to kick undead ass. Her anti-holy blood, perhaps? Ciara's suspicions are confirmed when she's assigned to a special-ops division known as the Immanence Corps, run by the Control's oldest vampire and filled with humans who claim to have special powers. To a confirmed skeptic like Ciara, it sounds like a freak fest. But when a mysterious fatal virus spreads through Sherwood - and corpses begin to rise from their graves - Ciara will not only get a crash course in zombie-killing, but will be forced to put her faith, and her life itself, in the hands of magic.

‘Bring on the Night’ is the third book in Jeri Smith-Ready’s WVMP vampire radio series.

WVMP is the most unique vampire urban fantasy out there. Hands-down. In this world American vampires are under jurisdiction of the ‘International Agency for the Control and Management of Undead Corporeal Entities’, otherwise known as ‘Control’. Vampires need to be monitored by the Government because being undead has a few draw-backs. Mainly, vampires get mentally ‘stuck’ in the era in which they were turned, and they need the Control to help assimilate them into modern society and maintain a connection to this era. Another side-effect of vampirism is psychological ticks and oddities – most vamps develop OCD (obsessive compulsive disorder) in various forms, partly because of the strain it takes them to live in current times and the mental/sensory overload of being a vamp.

Ciara Griffin is the main protagonist of WVMP. She grew up as a con-artist and stumbled across the great vampire conspiracy when she applied for a job at vampire radio, WVMP. The radio station is a Control company designed to shelter vampire DJ’s while also keeping them connected to the modern world – the DJ’s are able to play music from their decade, but interact with modernity.

Over two books Ciara has befriended these vampires, and fallen in love with 90’s DJ vampire, Shane. Ciara has also gotten mixed up with Control and become an agent for them.

This book follows on from the events of ‘Bad to the Bone’. In ‘Bring on the Night’ Ciara is finishing her Control training, completing her university degree and getting serious with Shane. Very early on in the novel Shane proposes to Ciara, and despite all human/vampire odds, Ciara agrees. Her fellow Control agents aren’t all as thrilled with the engagement, however;

“Ciara, listen.” David’s voice dipped. “Be Shane’s girlfriend, live with him as long as you can stand it, but don’t take this step. If you could look ten or twenty years down the road, you’d see all the things he can’t give you.”

But Ciara and Shane’s happiness is put on hold in wake of a chicken pox pandemic spreading through Sherwood. Ciara never had chicken pox as a child, and she is exposed to at least 2 other diseased people. The chicken pox plague breaks out at the same time that cadavers (i.e.: Zombies!) are spotted around town. It all coalesces to be a big ol’ bag of ‘holy hell’ for the WVMP crew and Control.

‘Bring on the Night’ is perhaps the most important novel in the WVMP series thus far... because Ciara turns into a vampire. This is HUGE! With other Urban Fantasy series, readers have a fair idea of where vampire/non-vampire characters stand. Sookie Stackhouse fans know that Sookie isn’t going to be bitten any time soon because Ms. Harris has said as much, and it goes against her beliefs. Likewise, nobody was particularly surprised when Cat was turned fully vamp in Jeaniene Frost’s ‘Night Huntress’ series. But in WVMP Ciara being turned was totally up in the air. It could have gone either way, total 50/50. And I, for one, was shocked by Smith-Ready’s choice to turn Ciara. I think Smith-Ready also set the first half of the book up as a red herring of sorts, because with Shane’s proposal came Ciara’s worries about their human/vampire differences. I thought that was a hint at the rest of the series... and then Smith-Ready goes and turns everything on its head by vamping Ciara.
OH. MY. GOD.

I loved Ciara’s transition to vampire. It’s quite realistically handled, even the mundane side of things (waiting for your fangs to pop, for example). But more than that, Ciara’s turning is an emotional exploration. Smith-Ready really delves into Ciara’s grieving. And Ciara doesn’t just mourn the obvious things like sunshine – she laments losing her favourite foods, and her lost independence now that she is reliant on blood donors for her survival. Jeri Smith-Ready beautifully and sadly explores Ciara’s loss of life, and she does so with a totally new perspective. Ciara sees her need of willing blood donors as a sign of dependency, and a loss of independency – she likens drinking from blood donors to begging for scraps of food. I never thought of it that way, but I could understand Ciara’s sadness and fear completely.

But for all the negatives, Ciara’s vampirism allows her and Shane to have forever. This novel, more than the first two, delves into Shane and Ciara’s relationship. There’s a lot of delicious hot n’ heavy between them in ‘Bring on the Night’, and it is wonderful! Shane has always been a very romantic, intense guy. But in this third book he exceeds his previous romantic endeavours and becomes a hot combination of Alpha/Beta hero gorgeousness;

Shane raised his trembling hands like he wanted to seize me. But instead he rested them gently, one on each of my cheeks.
“Ciara.” He bent low and brushed my lips with nothing but his breath. “I’d have kicked God’s own ass to get you back with me.”

Shane and Ciara are one of my favourite UF pairings... and I love them even more after ‘Bring on the Night’. I don’t want to spoil anything, but the ending will have you tearing up and going “awwww!”.

This third book also has some kick-ass action and horror cool. One of my favourite scenes in the novel involved “incompetent zombie cheerleaders”. And that says it all, I think.

‘Bring on the Night’ is one of the best Urban Fantasy novels I have ever read, and it is a compliment to one of the most original UF series out there. Jeri Smith-Ready outdoes herself; she completely changes the trajectory of the series, overhauls her main protagonist and brings some seriously mushy romance to an otherwise zombie-butt-kicking novel. Amazing! I can’t wait for fourth book ‘Let it Bleed’ coming August 2011. 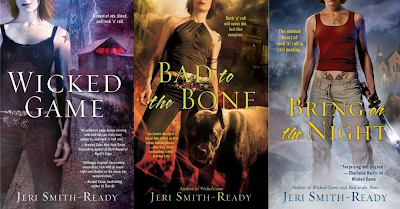