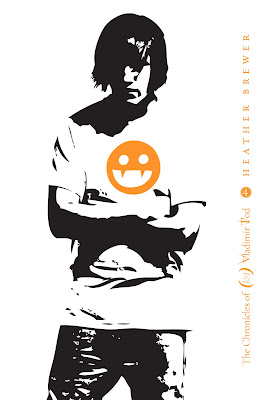 Things are looking dark this year for Vladimir Tod. With Uncle Otis awaiting trial for crimes against vampirekind, Vlad seeks the help of a mysterious and powerful vampire, Dorian. Unfortunately, Dorian has his own agenda and Vlad is about to be the main item on it. Beset on all sides, from former friend and current foe alike, Vlad will have to use all his skill and training just to survive his junior year.

Heather Brewer continues to impress in this, the fourth book of her ‘Vladimir Tod’ YA series.

‘Tenth Grade Bleeds’ concentrated on Vlad’s shifting friendships, particularly with his childhood bestie, Henry. In ‘Eleventh Grade Burns’ Vlad’s focus shifts again to his romantic attachments.
He has been dating his long-standing crush, Meredith, for a while now. But having lost Henry as his drudge Vlad employs a new ‘blood donor’ in the form of a pretty girl called Snow. Meredith doesn’t know about Vlad’s vampirism, but Snow accepts him wholeheartedly. Vlad is suddenly torn between who he wants to be with Meredith, and who he lets himself be with Snow;

Her voice was calm, but hushed. “Does she know that you’re a vampire?”
He shook his head. “No. I haven’t told her. I just don’t know if she could handle it.”
They stood there, so close, for so long that it seemed that time had actually disappeared and the world had completely forgotten them.
“Maybe you need to find that out, Vlad. If you love her, you’ve got to give her a chance to know you. And if she loves you, she’ll love everything about you.” Snow’s voice was soft, but full of meaning. She took a breath and whispered, “The way I do.”

This fourth book is the most romantically inclined, and it comes at a perfect point in the series. Books 1 - 3 of 'Vlad Tod' have been quite male-orientated, though Vlad is an endearing enough character to appeal to both sexes. In 'Eleventh' the romantic plot becomes a focus, with Brewer layering vampire politics with Vlad’s raging hormones. It makes for fantastic reading as Brewer is quite clearly transitioning Vlad into a new phase of adulthood, while also exploring his monster side. The love triangle works to illustrate Vlad’s overarching struggle between his vampiric and human nature – with Meredith and Snow representing Vlad’s fighting halves.

What I love most about these books is the fact that Brewer’s vampires are *vampires*. They don’t sparkle. They aren’t vegetarian. Vlad is earnestly struggling with blood cravings and his predatory nature, all of which is exacerbated by his hormones. Brewer’s vampires are not always nice, and Vlad does occasionally make stupid mistakes that will have you pulling your hair out. But hey, he’s a teenage boy on top of being a vampire, so some leeway for stupidity is granted. I just like the fact that Brewer’s books are ‘Gothic Young Adult’ because of her willingness to explore the crueller, bloodthirsty side of vampirism.

And of course the genius of the ‘Vlad Tod’ series is simply in that this is about a teenage vampire. So Vlad has all the typical dramas and dilemmas – like being without a car and needing to ace his math test. He’s a very down-to-earth teen vamp and I have really enjoyed watching him screw up, come into his own and grow into a young man.

Really looking forward to the final book; ‘Twelfth Grade Kills’. It should be a doozy! 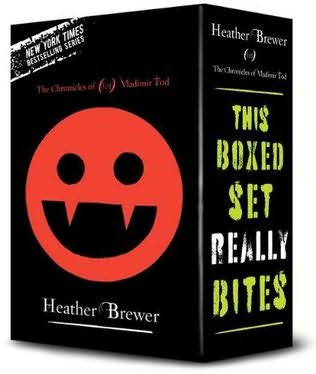