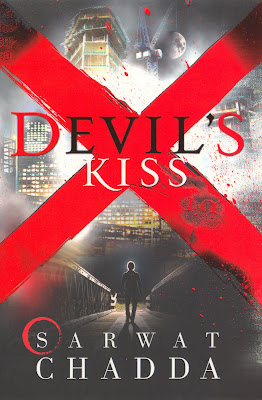 THE RUSTY CHAINS GROANED AS HE SWAYED BACK AND FORTH, WATCHING HER. 'MAYBE IT'S NOT HIM,' THOUGHT BILLI. 'MAYBE HE'S JUST SOME NORMAL KID. MAYBE I DON'T HAVE TO MURDER HIM.'
Billi SanGreal is facing her Ordeal. The last test before her initiation. But she hadn't expected this. Not killing a little kid.

Billi is destined to follow her father into The Order and protect the masses from the unholy. From the thousands of evil, tortured souls that prey on humanity.

Billi is fifteen. Is a life of brutal fighting and deadly combat really what she wants?
Or is temptation threatening to lead her astray . . .

Sarwat Chadda’s first book in the ‘Devil’s Kiss’ series is a revelation!
Truly, I have slogged through some God-awful (pardon the pun) books about angels. Becca Fitzpatrick’s ‘Hush, Hush’ and JR Ward’s ‘Covet’ almost ruined the entire angel-theme for me. But Chadda’s novel has managed to change my thinking entirely!

Billi SanGreal is a member of the Knights Templar. Once known and revered as the ‘Poor Fellow-Soldiers of Christ and of the Temple of Solomon’, this religious order now resides in London and has only nine members. Billi is just fifteen-years-old, and when we meet her she is being inducted into the Templar. Her final test? To kill a six-year-old boy who has turned demon.
That’s what the Templar do in the modern day. They kill Loony’s (werewolves), hunt vampires and demons and make sure the general human population know nothing about their holy work.
Both Billi’s parents were Knights – her father, Arthur, is currently head knight, but her mother died years ago when she saved Billi from a ghul attack.

Despite the Templar being her legacy, Billi resents her destiny. She hates her father’s fanaticism, the painful weapons training, Latin-learning and the fact that she will never be normal, or safe. Billi especially despises the way her best-friend, Kay, is heralded by the knights as a wise and important oracle... Billi wishes Kay could just be her best friend, but even he seems caught up in his own shining destiny.

Billi wishes for a respite from her dangerous and reckless life... and then Mike comes along. Mike is older than Billi and handsome, a white knight who comes to her rescue one night.
But it is no coincidence that Mike enters Billi’s life on the dawn of a biblical catastrophe...
The grigori (‘Watchers’) were angels sent from heaven to judge humanity and deliver punishment to the unfaithful. They were led by the Angel of death. The grigori destroyed Sodom and Gomorrah. It was they who unleashed the Flood; the tenth plague and killed all of Egypt’s first-born children.

The grigori were the most feared of all God’s angels... and now, they have returned.

I could not put this book down!

Chadda’s story is epic, he is writing a plot of biblical proportions and there were many times while reading the book that I physically shivered from certain passages. Chadda’s writing can be quite disturbing and graphic, to the point that his words crawl up your back; and certain sentences leave an icy trail across your nape.

“You’re right, Billi. There are so few of us, but we keep the darkness at bay. Why? Because we’re ruthless. We bring nightmares to the monsters.” He leaned closer so he could whisper it. “Fear is a powerful weapon.”

The storyline is mired in religion and biblical references. I know very little about Christian religion (or any religion really) but I never felt lost in the intricate biblical plot points. Chadda explains everything so beautifully and with action to back it up, so you never get an information summary-dump. And the biblical references are common knowledge anyway – things like the plague and flood in Egypt, King Solomon and the death of all Egypt’s first-born children. These are well-known biblical stories, so even if you’re not that way inclined, you can still appreciate the forest for the trees...

And then there’s the villain – the Angel of death, Michael. Chadda has written a truly twisted bad-guy who is full of contradictions and conflicts. Michael is completely warped and sinister, a religious extremist to the nth degree. Michael is the ultimate martyr, believing that without suffering there can be no compassion. He has warped every one of God’s decrees to suit his own homicidal beliefs... and the best thing about Michael? He’s a freakin angel! Michael, an angel who acts more like a devil. Brilliant.

Bill reached out, one hand on the column, the other stretched towards his back. “Mike...”
“It takes a terrible thing to remind people of their obligations to God. The more terrible, the better. Wouldn’t it be something if that happened?”
“What happened?”
“Something so terrible that everyone returned to Him. To fill the churches on Sunday instead of Ikea. To fill the mosques, the synagogues.” He spread out his arms. “An act of God that would restore faith.”

What I loved about ‘Devil’s Kiss’ is that Billi isn’t your typical protagonist. Billi doesn’t feel brave, the Templar’s religion doesn’t inspire faith in her and she actually wants to turn her back on the order. It is in fact her best-friend, Kay, who seems to be the ‘hero’ of the Knights Templar. It is Kay who has visions, is telekinetic and telepathic. Arthur is proud of Kay and treats him like a son, and in fact all of the Knights are in awe of Kay’s ability regardless of his age. Billi is sort of the anti-hero to Kay’s shining example, and I loved her for it. I loved the fact that Billi is scared of the monsters she has to face, and that she is constantly questioning her loyalty to the Knights Templar. I really responded to Billi as a reluctant heroine, because at the end of the day she is just a fifteen-year-old girl who is thrown into this hard life and is constantly petrified. Billi was so real and relatable, her fear so honest and understandable, she is one of the best YA protagonist’s I have ever read.

‘Devil’s Kiss’ is a book of grand ideas, based on a biblical platform. But despite the epic story, Sarwat Chadda has managed to weave a fantastic family-drama throughout the novel. Billi and her father, Arthur, have much tension and many unsaid words between them. Billi feels as though Arthur is forcing her into the Templar life, and she wonders if it will kill her the way it did her mother. Billi also believes, whole-heartedly, that her father doesn’t love her and he would choose the Knights Templar over her. The push-pull family drama was brilliant to read and ensured there was always an electric current running through all the scenes between Billi and her father.

Sarwat Chadd’s ‘Devil’s Kiss’ is amazing. The novel is so complex and compelling – Chadda explores big issues like religious extremism and piety, but remaining firmly in the YA genre for his thrilling plot. He has written a wonderful David-esque character in Billi SanGreal and a sinister Goliath in the angel, Michael. I was blown away by this book, I’m going into the second novel, ‘Dark Goddess’ on pins-and-needles. 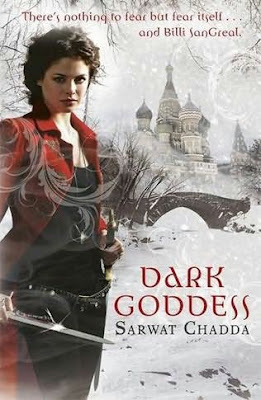