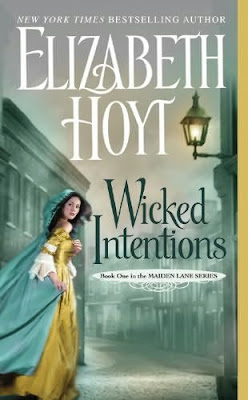 A MAN CONTROLLED BY HIS DESIRES . . .
Infamous for his wild, sensual needs, Lazarus Huntington, Lord Caire, is searching for a savage killer in St. Giles, London's most notorious slum. Widowed Temperance Dews knows St. Giles like the back of her hand-she's spent a lifetime caring for its inhabitants at the foundling home her family established. Now that home is at risk . . .

A WOMAN HAUNTED BY HER PAST . . .
Caire makes a simple offer-in return for Temperance's help navigating the perilous alleys of St. Giles, he will introduce her to London's high society so that she can find a benefactor for the home. But Temperance may not be the innocent she seems, and what begins as cold calculation soon falls prey to a passion that neither can control-one that may well destroy them both.

A BARGAIN NEITHER COULD REFUSE

Maiden Lane is situated in St. Giles, a notoriously dangerous area of London – gin-soaked streets, urchin children, brawling bodies and a masked vigilante roaming the streets.
It is here that Temperance Dews and her brother, Winter, run an orphanage for abandoned children. It is also here that one Lord Lazarus Caire lost his mistress to a knife-wielding murderer. In the most unlikely of circumstances Lord Caire and Temperance’s paths will cross – Caire needs someone with St Giles know-how and Temperance needs a patron for her flailing orphanage. Temperance agrees to help Lord Caire find his mistresses murderer, and in return Lord Caire agrees to help look for a moneyed patron for the orphanage. But both Temperance and Lord Caire will get more than they ever bargained for...

I stumbled across Elizabeth Hoyt earlier this year, and her novel ‘The Raven Prince’. I was really blown away by that book, and did intend to read more of Hoyt’s work... but it wasn’t until the blogosphere started buzzing with praise for her newest novel ‘Wicked Intentions’ that I finally revisited Hoyt’s writing.
And I've got to say... she amazed me again.

Hoyt excels in writing complex and compelling characters. Lord Lazarus Caire is one such conundrum. First impressions would suggest that he is an anti-hero of the rake variety... a debauched lady-lover who shuns polite society and is gossiped to have perverse bedroom preferences.
Rakes are a dime a dozen in historical romances... but Hoyt’s deliciously devilish and dark hero has more going on beneath the surface than just a predilection for ‘tie me up, tie me down’ bedroom antics. Hoyt has written in Lazarus a deeply disturbed loner for whom physical touch is repulsive and painful. Lazarus had an isolated childhood, devoid of love and affection, and as a result he has built an invisible fortress around himself... to the point that he mentally fears physical touch.
That’s just an example of how much deeper Hoyt goes in her historical romances. Lazarus isn’t just a rake; he’s a rake with deep-seated psychological issues.

Temperance Dews is likewise not your typical historical romance heroine. Yes, she runs an orphanage and has been a poor widower for nine years. In any other historical romance she would be written as a thorough Mary-Sue to show a rake the error of his ways and the salvation to be had from pure love. Think again. Temperance has issues just the same as Lord Caire, and they run just as psychologically deep. Temperance has been harbouring a guilty conscience since her husband’s death, and to repent for her wicked ways she has been punishing herself for these past nine years. Temperance works at her family’s orphanage, but she holds herself back from caring for the children. She holds her emotions in check, and refuses to allow her heart to love.

“There’s something about her,” Caire said in a low voice. “She cares for everyone about her, yet neglects herself. I want to be the one who cares for her.”

I really loved Hoyt’s character explorations into her hero and heroine. Hoyt really makes her readers work to know her characters – as a reader you have to see past their shield and armour, discern their motivations and issues. As much as ‘Wicked Intentions’ is a mystery whodunit, each of Hoyt’s character are mysteries unto themselves for readers to unravel and predict. Temperance and Lord Caire are both cordoning themselves off from feeling – but it’s a matter of reading to know why, to know what shadows lurk in their past and deep down in their psyches. ‘Wicked Intentions’ is a historical romance, but Hoyt’s characters are so layered and wonderful that by the end I was pretty sure it was also a psychological thriller to boot...

And then there’s the fact that Elizabeth Hoyt writes marvellous sex scenes. I found that in ‘The Raven Prince’ and Hoyt proves herself yet again in ‘Wicked Intentions’. Her sex scenes are great literary foreplay, sensual and slow scenes that unravel in conjunction with the character’s lowering defences. The sex scenes are more than just smut when Hoyt writes them, they become lush revelations;

Something snapped. He muttered a curse before hauling her around and slamming his mouth down on hers. This was what he wanted; this was what tamed the beast within him: her soft lips, the quiet sound of her moan as he licked across them. There was a desperate, animal need within him, one he couldn’t fully identify. One he couldn’t understand rationally. It was tearing him apart from within, this need. It wanted her – something from her – though he didn’t know quite what. He only knew that if this terrible need was not assuaged, he very much feared he might lose something within himself.

‘Wicked Intentions’ is primarily a historical romance, but the propelling plot that brings Lord Caire and Temperance together is the hunt for a murderer in St. Giles. And how ironic that the love interests are brought together by the man’s hunt for his mistresses murderer. The murder mystery often takes a back-seat to Temperance and Caire’s romantic development, but overall I felt like Hoyt balanced the mystery and romance very well. I think it helped that hunting for the murderer bought Temperance and Caire closer together, and offered up numerous situations in which to test their mettle.

I did have two niggling complaints about ‘Wicked Intentions’. One small complaint, and one rather large story issue...

Along with the murder hunt and Temperance and Caire’s romance, there was a storyline regarding Temperance’s little sister, Silence. Silence is the youngest of the five Dews children, and married to a ship captain called William. William captains the Finch, and upon returning from sea the ship’s cargo is stolen. The ship’s owners accuse William of being in cahoots with the thieves who robbed the Finch, and it looks as though William will be thrown into gaol unless the cargo turns up. All of St. Giles knows that notorious thief ‘charming Mickey’ stole the cargo, but Mickey owns St. Giles and nobody wants to confront him. Nobody, except Silence. But what Mickey asks Silence to do in exchange for the cargo and her husband’s innocence will test the strength of her marriage and family-ties...
This storyline threw me.... where I thought that the murder-mystery and romance melded really well together, this side-story running in conjunction really stuck out like a sore thumb. For a little while I wondered if the storyline of the missing cargo would eventually run into the murder-mystery... but by the end of ‘Wicked Intentions’ I realized that Hoyt intends this to be a continuing minor plot (possibly throughout the series?). I’m really not sure about Silence’s side-story. On the one hand I think the storyline unto itself is great, and could have warranted a book by itself. But within the context of Temperance and Caire’s story... it didn’t work for me.

My minor complaint was regarding character names. The names are a little odd, and upon first reading they are also slightly tough to grasp. For some reason Hoyt has provided many of her major characters with noun-names. Temperance, Winter and Silence. And she also throws in a few adjective-named characters for good measure, like Lord Caire’s valet called Small. When first introducing a few of these characters I had to re-read sentences when I realized that Hoyt was using nouns as proper nouns. Yeah, it was somewhat confusing.

Hoyt’s books are not your typical historical romance fare. She isn’t writing throw-away smut-fluff to be consumed in an afternoon of light reading. Hoyt’s historical romances have a slightly sharper edge, intricate plot and complicated heroes. Elizabeth Hoyt writes some of the smartest historical romances I have ever read, and while there is still plenty of sensual sex to entertain and keep you hot under the collar, it’s her complex characters and intricate storylines that set her apart from the rest. 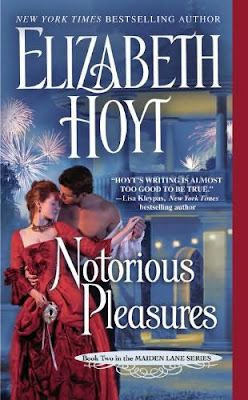 I really look forward to the second book in the ‘Maiden Lane’ series, called ‘Notorious Pleasures’ and coming in February 2011.
Posted by Danielle at 12:33 PM