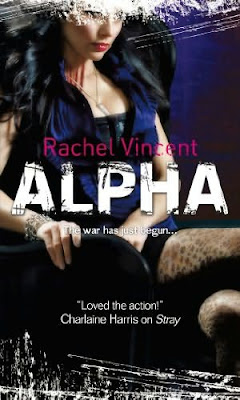 Power, revenge, and justice - prepare yourself for the final battle! In the final chapter of "The Shifters Series", Faythe and her Pride must fight a tyrannical werecat intent on taking over the territorial council, and the south-central Pride in particular. It's down to Faythe to take on the role of Alpha before she feels completely ready for the job. Forced to rise to the occasion, Faythe must balance experience, advice, and the urge for vengeance. She must also finally choose between Marc and Jace... No decisions will be is easy, and not everyone will survive this epic fight to the death.

‘Alpha’ is the highly-anticipated (craved, salivated, desired) sixth and final book in Rachel Vincent’s ‘Werecats’ series. And it is good. . . so, so good.

‘Alpha’ picks up where the mess of ‘Shift’ left off. Faythe Sanders and her South Central Pride find themselves in a tangled web of deceit and corruption, woven by the power-hungry Calvin Malone. Faythe’s father and Alpha werecat, Gregory Sanders, is about to be out-voted in a political manoeuvre that will give Malone absolute power over the territorial council. Malone intends to introduce a werecat police force to keep order amongst the prides (and the officers will be, coincidentally, hand-picked by Malone). He also intends to introduce an Alpha voting system whereby an Alpha candidate may be deemed unfit to rule, and to impose restrictions on ‘strays’ within pride’s (look out Marc. . .)
All of these political upheavals are leading towards a coup; a civil war to bring Malone down and allow the South Central Pride to defend their land.

But amidst the lead-up to battle, Faythe Sanders has her own personal problems. In ‘Shift’, Faythe’s ex-fiancée/love of her life, Marc, discovered that she’d had a heated encounter with fellow enforcer, Jace. In ‘Alpha’, Marc is cuckolded and hurt. . . even more so when Faythe reveals her love for Jace and inability to choose between the two men. Now it’s up to Faythe to choose, remembering that whoever she marries will rule the South Central pride alongside her...

Let me just start by saying Rachel Vincent had a very hard-task in ‘Alpha’. This is the final instalment in the ‘Werecats’ series and a lot of fans had some very high expectations. . . which Vincent delivers, ten-fold.

For me, the politics in ‘Alpha’ was the stand-out storyline. For five books now Vincent has been writing dark, political foreboding. She’s created intricate plot-points and an outstanding over-arching theme concerning power, responsibility and good vs. evil via the werecat societal structure. And it all comes to a head in ‘Alpha’, brilliantly so. I've always loved the politics and power-struggles in the ‘Werecats’ series, particularly because they are close to home. Throughout the entire series Vincent has been world-building this American shapeshifter society, feeding us tidbits of anthropological information about their society, hierarchy and conventions – everything from the importance of dams in the werecat population to stray’s territorial fights. And all of Vincent’s finessing pays off in this final instalment. The stakes are high, the politics under-handed and the players devious. I've been invested in this storyline from the get go, and the political-thriller ending is marvellous, bloody and satisfying!

I went into ‘Alpha’ with a severe inkling that I would be crying throughout the book. . . and I was right. I won’t give anything away, but my fears were met and exceeded. I knew that going into civil war would be messy for the South Central Pride. I knew there would be casualties, and to a certain extent I correctly guessed who would be taken out. But no matter how prepared I was for heartache, Vincent still bowled me over and had me weeping into the book. She handles the death and carnage with equal-parts adrenaline and sympathy; my heart was racing throughout the battles, but when it came time to say goodbye to certain characters I loved that Vincent slowed the pace and drew out the emotional upheaval. I cried, a lot, but I can’t fault Vincent’s fantastic storytelling. . . and I do tip my hat to her for making tough decisions and killing-off beloved characters for the sake of story (unlike some precious authors, *cough* Stephenie Meyer, ‘Breaking Dawn’ *cough*).

One thing I was concerned about going into ‘Alpha’ was the protagonist, Faythe Sanders. I really struggled to like Faythe from ‘Stray’ through to ‘Pride’ – I found her self-centred, spoilt and selfish. Faythe started to rise in my esteem around about fourth novel ‘Prey’, when she became a hardened enforcer and started to see the end-game her father had in mind for her as successor to the pride. I was really impressed with Faythe’s leadership role in ‘Alpha’. I wasn’t sure if she had it in her to be anything other than a narcissistic whinger. . . colour me shocked when Faythe stepped up to the plate. In ‘Alpha’ she is 100% bad-ass, a changed person from her first appearance in ‘Stray’; in this final instalment she thinks of herself last and always puts the pride first. Not to mention the fact that she has balls of steel and faces down her worst enemies and darkest nightmares;

“Can I see it?”
He blinked, still scowling. “See what?”
“Your scar.” His expression darkened like a sudden eclipse, and I let my gaze grow cold. “You want to hear me scream? Give it your best shot. But until then, every time you take off your shirt, you may as well be handing out my business card. I shoved my blade deep inside you and loved every single inch of it. When I can’t sleep at night, the memory of you screaming like a little bitch is my lullaby. And everybody knows exactly what that scar means – that you got your ass handed to you by a little girl. Again.”

There were so many times throughout ‘Alpha’ when I was whooping and hollering for Faythe. She gets knocked down, but is never out and I applaud Vincent’s beautiful execution of Faythe’s character trajectory.

But one thing I've never been able to comprehend about Faythe is her love-life. I've always been a Marc fan, and I've never understood his devotion to Faythe after she repeatedly put him through the emotional ringer – by abandoning him at the altar, not speaking to him for years and finally when she cheated on him in ‘Prey’. But as much as Faythe’s infidelity stuck in my craw, I begrudgingly understood her predicament. Jace and Marc are both incredible Alpha men, and each is perfectly suited to Faythe. Jace and Marc both challenge and question her; they push her to be a better woman, fighter and leader. Not to mention the fact that they are both hunky-delicious. I empathized with Faythe’s love triangle, less because I felt sorry for her, more because of Marc and Jace’s likability. . .

However, for all that I loved ‘Alpha’, the resolution of the romance and love triangle between Jace, Faythe and Marc did not work for me. . .


**SPOILERS ahead. Highlight to read **

I loved the many romantic red-herrings Vincent peppered throughout ‘Alpha’. Referencing Faythe’s mother and father’s romance which was originally a triangle with Di Carlo – I thought that was a wonderful piece of trickery to keep reader’s guessing (because in that scenario Greg Sanders was Jace, and he ended up with the girl).

And I've got to say that for the bulk of ‘Alpha’, I was as clueless as Faythe as to who she should pick. I swung back and forth between Marc and Jace, Jace and Marc so many times that my head was spinning.

But in the end I don’t think Faythe was worthy of Marc’s love. . . She left him standing at the altar. She didn’t speak to him for all the years she was away at University (consequently shacking up with a human boyfriend). She cheated on him. . . and then the rubbed salt in the wound by considering carrying on her affair with the other man and refusing to choose between them. Marc was well and truly cuckolded, and for all that Faythe put him through I don’t think she’d earned his love by the end of ‘Alpha’.

Sure, she asked him to marry her. . . but they’d been engaged previously and she’d run out on him. I needed more than Vincent’s ending offered. I need a bigger declaration of love – more proof of Faythe’s changeability and reform. I also didn’t like the fact that Faythe’s romantic declaration came in the aftermath of battle, when adrenaline was stilling running high and euphoric. I’m not saying I wanted her to hold a boom-box over her head and serenade Marc outside his window. . . but I needed *more*. To balance out Faythe’s past acts of cruelty, she needed to really make it up to Marc and prove herself and her love for him, and I didn’t get that in ‘Alpha’. All I got was Faythe finally choosing him, without backing her decision up with evidence of her devotion.

‘Alpha’ was a befitting ending to a roller-coaster series. I am sad to see this series end – especially because the finale in itself offers such tantalizing possibilities. I think this series could have conceivably gone on for a couple more books, focusing on the aftermath of the werecat civil war. And if this truly is the end for ‘Werecats’, then I would have liked an epilogue to balance out the horror and death of the final chapter. . . even if an epilogue was just mush and romance, I would have appreciated one nonetheless.

Still, this was an admirable finale full of intrigue, destruction, and romance, with one kick-ass and reformed heroine at the centre. Brilliant.