'Forget You' by Jennifer ECHOLS 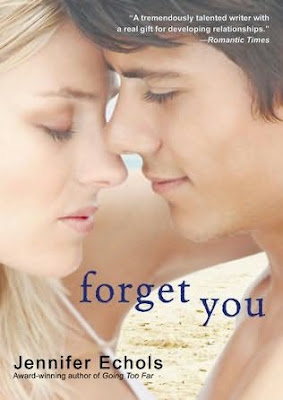 WHY CAN’T YOU CHOOSE WHAT YOU FORGET . . . AND WHAT YOU REMEMBER?
There’s a lot Zoey would like to forget. Like how her father has knocked up his twenty-four- year old girlfriend. Like Zoey’s fear that the whole town will find out about her mom’s nervous breakdown. Like darkly handsome bad boy Doug taunting her at school. Feeling like her life is about to become a complete mess, Zoey fights back the only way she knows how, using her famous attention to detail to make sure she’s the perfect daughter, the perfect student, and the perfect girlfriend to ultra-popular football player Brandon.

But then Zoey is in a car crash, and the next day there’s one thing she can’t remember at all—the entire night before. Did she go parking with Brandon, like she planned? And if so, why does it seem like Brandon is avoiding her? And why is Doug—of all people— suddenly acting as if something significant happened between the two of them? Zoey dimly remembers Doug pulling her from the wreck, but he keeps referring to what happened that night as if it was more, and it terrifies Zoey to admit how much is a blank to her. Controlled, meticulous Zoey is quickly losing her grip on the all-important details of her life—a life that seems strangely empty of Brandon, and strangely full of Doug.

Zoey Commander is blonde and beautiful. Her father owns the local waterslide park, ‘Slide with Clyde’, where all her friends work over the summer. Zoey has started dating her good guy friend, Brandon and she is swim captain. But that’s all just surface. . . underneath it all Zoey is a hairsbreadth away from following her mum to the loony-bin.

For starters her family fell apart after her dad got a perky twenty-four year old Slide with Clyde employee called Ashley pregnant. Her parents got divorced and her dad kicked Zoey and her mum out of their beach-front house in order to start his new family. Zoey and her mum have been living in an apartment complex, having good days and bad days, highs and lows in the wake of the divorce. And then Zoey came home to find her mum half-dead, having left a suicide note and swallowed a bunch of sleeping pills because she couldn’t cope with it all.

Now her mum is at a mental institution. Zoey’s dad has taken custody of her, but doesn’t intend to postpone his and Ashley’s Hawaiian elopement (or take Zoey with them). Furthermore, Zoey’s dad doesn’t want the town knowing about her mum’s attempted suicide – he doesn’t need any more gossip added to his tabloid life - and has therefore forbidden Zoey from talking to anyone about the ordeal. In attempting to cope with the night’s events, Zoey ‘hooks up’ with Brandon, ignoring his player rap in order to gain some normalcy in her spiralling life.

But then things get even weirder. Zoey’s high school arch nemesis, Doug Fox, gets very angry about Zoey and Brandon’s relationship. Something happens at a post-game beach party that holds special significance for Zoey, if only she could remember it. . . but being in a car accident and saved from the wreck by your arch nemesis does funny things to your memory. . . add onto that your mental mother an abandoning father, memory loss and a peculiar attraction to your possible ex-arch nemesis and things get complicated.

I have been reading some rave reviews of Jennifer Echols stand-alone YA novel, ‘Forget You’. . . and for good reason. Echols absolutely captures teen voice in this cast of characters. From dour and surly Doug Fox, to Zoey’s contradictory hyper-aware obliviousness – she speaks to so many familiar teenagers, and keeps their voice believable even amidst quite outlandish storylines;

This had nothing to do with Doug. The non sequitur tingling must be what happened when you had sex for the first time and then got a concussion and thought you’d had sex again when you didn’t and then found out you wouldn’t be alone with your boyfriend for at least a few more days. That is, brain damage.

I loved Zoey – I think Echols nailed her character completely. Zoey is definitely a victim of circumstance, just trying to cope with the many curveballs life throws at her. And I loved the fact that Echols has written a very complex psychological character exploration for Zoey. Like the fact that for all of her father’s rotten behaviour and general awfulness, Zoey loves him and craves his attention/affection. As a reader I could step back and get angry on Zoey’s behalf for the way her father treats her, I can even see disturbing similarities between Zoey’s father and her ‘boyfriend’, Brandon. But true to life Zoey is pretty oblivious to her own plight and pointless attempts at gaining her father’s approval by being the (impossibly) perfect daughter. I think that’s so, so true to life. I also loved the fact that Zoey reacts to her mother’s attempted suicide with anger and embarrassment – maybe it’s not politically correct, but it felt so true.

I also adored Doug Fox. This is one crush-worthy guy – equal parts dark and mysterious, full of James Dean teen rebellion but completely gentle and caring, a solid rock for Zoey to lean on. I also loved Doug for his complexities. His home life is as bad as Zoey’s, but not outwardly so since his father isn’t concerned with public appearance;

“What kind of potshots?” I asked, beginning to worry.
“Insults for not drinking beer,” he said huskily. “Because you know that means you’re gay. Teetotalling and homosexuality are the twin and intertwined forces of evil.”

There was lots about ‘Forget You’ that I loved. But to be honest, it felt like there were two very different books here and only one of them got a befitting ending.
On the one hand, a lot of the book is about Zoey’s home life – her father’s cheating and her mother’s downslide. And then there’s seemingly another book about Zoey and Doug – their antagonistic high school relationship and then their mysterious car accident that left Zoey with amnesia and a burning desire for Doug.

I really loved and got invested in the story about Zoey’s parents. I felt such instant rage at the many ways in which her dad screwed up – banging a twenty-four year old employee, divorcing Zoey’s mum, kicking Zoey and her mum out of their house and eloping with his mistress. . . all examples of impressive ego and pseudo-parenting. And then the story about Zoey’s mother – so heartbreaking and full of emotional potential.
But Echols wraps their storylines up so poorly and half-heartedly that it becomes a gaping plot-hole and really detracts from the good parts of ‘Forget You’.

I really felt like three climaxes needed to be reached in ‘Forget You’ – one between Zoey and Doug, one with Zoey and her mother and one between Zoey and her dad. But we only really get the Doug/Zoey storyline wrapped up. I was waiting and waiting for the emotional pay-off concerning Zoey’s parents – I wanted her to acknowledge that her dad is a bad parent, and to rant and rave at him - pointing out his many foibles. I wanted Zoey to sit down with her mum and let her know she is there for her, loves her and supports her.

But by the last page the conclusion with Zoey and her dad is written in summary - off-scene and to the utter detriment of the book. I wanted that confrontation! – after Echols had written such a nasty character in her father, I wanted Zoey to confront him and admit to herself how awful he is and that his disinterest in her isn’t her fault! But the supposed ‘heart to heart’ happens off the page, in a couple of lines of recounted summary that just fell so abysmally flat.

And then after Zoey spends a good deal of the book with displaced feelings of anger towards her mother. . . this storyline is also wrapped poorly. Things end so neatly and conveniently, in a scene in which Zoey has a ‘heart to heart’ with her mother on her mobile phone! Come on! That’s an emotional rip-off - totally denying readers a potentially brilliant and heartrending scene-setting character journey!

I was so invested in the parental side of the ‘Forget You’ story that at times all the Doug/Zoey exploration grated. It got to the point where I didn’t want the teen romance, I wanted a few pages dedicated to Zoey and her mum. . . especially since her mother’s suicide is the plot-trigger of the whole book. And really, a parent’s attempted suicide really deserves more finesse and attention than Echols ended up giving it.

I really did love ‘Forget You’. Kudos to Echols for writing terribly true teen characters. But on the other hand I needed more from the story – Echols initially raised the emotional stakes, but the pay-offs were either non-existent or fizzled. What a shame!

Email ThisBlogThis!Share to TwitterShare to FacebookShare to Pinterest
Labels: Jennifer Echols, YA