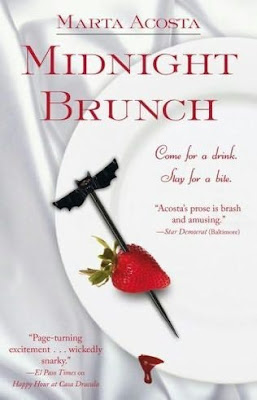 What's a girl to do when she discovers she's the main course on the menu?
Hip, funny Milagro de los Santos thinks she's finally found love and a home at the California ranch of fabulous Oswald Grant and his urbane relatives, who have a rare genetic disorder that some call vampirism. But Milagro is bewildered when she's excluded from an ancient and mysterious midnight ceremony whose participants include Oswald's unfriendly parents, a creepy family elder, and Milagro's ex-lover, the powerful and decadent Ian Ducharme. What skeletons are the vampires keeping in their designer closets?

When Milagro's life is threatened by a rogue family member, she flees to the desert to hide. Instead of solitude, she encounters an egomaniacal actor, a partying heiress, a sly tabloid reporter, and a lavish spa full of dark secrets -- all of which might help her find a way home.

‘Midnight Brunch’ picks up pretty much where ‘Happy Hour’ left off. Down-on-her-luck writer turned down-on-her-luck vampire, Milagro de los Santos, is living with her boyfriend, Oswald Grant on his sprawling family estate. For the most part Oswald and Milagro are blissfully happy. Their sex life is incredible; they have a hold on their red-coloured cravings and have an adopted child in dog Daisy. But there’s trouble in Casa Dracula... Milagro is feeling more and more like an outsider looking in at the Grant family’s many secrets and rituals. A certain dark lord vampire called Ian Ducharme is a thorn in Oswald’s jealousy and the Vampire Council are wary of Milagro’s miraculous recovery from vampire infection.

Ms. Acosta writes comedy of manners and errors. The storylines are sometimes non sequiturs that lead the character’s into random adventures of comedic brilliance. In ‘Midnight Brunch’ Milagro finds herself fixing a screenplay at a desert resort, playing maid to a B-grade heartthrob and chasing a chupa with a high school English teacher. The plot is a criss-crossing, beautiful mess of epic proportions – and as a reader you’ve just got to go with it and trust that Ms. Acosta will blow your mind and bust your gut.

Of course the stand-out of the ‘Casa Dracula’ series is Milagro de los Santos. What’s not to love about this feisty Latina vampire with a heart of gold? I loved her in ‘Happy Hour’, and the fictional girl-crush grows in ‘Midnight Brunch’. In this second book Milagro is recognizing the negatives of biting into an ancient family of secret-keeping vampires. As funny as Milagro is (and she really is hilarious) ‘Midnight Brunch’ is also an in-depth exploration into Milagro’s post-vampiric life... and it aint’ always pretty.

‘Midnight Brunch’ sees Milagro thrown into the deep-end and struggling with life after ‘happily ever after’. She’s dealing with Oswald’s jealousy, feeling like an outcast in the Grant family, hunger pains and job woes.

Second only to Mialgro, my other favourite character in the ‘Casa Dracula’ series is Ian Ducharme. First introduced in ‘Happy Hour’ where he became enamoured of Milagro (despite her rebuffs) the dark lord returns in ‘Midnight Brunch’. I can’t get a handle on Ian, and I think that’s why I love him so much. He’s like dark chocolate – a little too much, but just enough at the same time, a sweetly-bitter deadly conundrum. Dare I say, I even like Ian more than Oswald? *gasp!*. Ian is clearly in love with Milagro and I can’t help but root for a romance between them, even when I know it’s impossible (and he is a little psycho). I blame Marta Acosta for writing such a darn good bad-boy!

I looooooove this series so, so much. Milagro is a hot and feisty Latina heroine with a razor-sharp wit and big bazoombas. And I worship at the writer-altar of Marta Acosta. I’m going into third book ‘The Bride of Casa Dracula’ with a giddy heart and a craving for more spicy-Milagro.