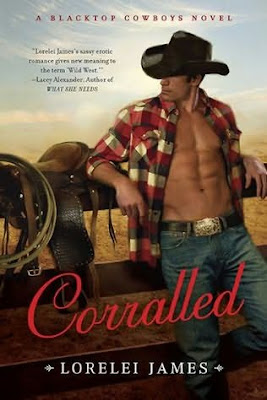 First in a new series about some hard-riding rodeo cowboys...and the women who can rein them in.
Sports therapist Lainie Capshaw has been rehabilitating injured cowboys long enough to know that a charming western drawl combined with a fine physical form doesn't mean you fall for the man.

So no one is more surprised than Lainie when she finds herself involved with not one, but two different men: Hank Lawson, a bullfighter, and Kyle Gilchrist, a bull rider. Lainie feels guilty about her two-timing, but it doesn't keep her from doubling her fun-that is until Hank catches her with Kyle.

She's shocked that Hank isn't mad. But she's more shocked to learn Hank and Kyle are hometown buddies. But when the men offer to share her-in every way-she knows that she's going to have to choose the one man who can give her the ride of her life...

Lainie Capshaw had it really great for a little while. For six months she had CRA cowboy Hank Lawson in her bed. . . and then for three months she also had EBS bull-rider hunk Kyle Gilchrist between her sheets. Then it all went wrong. Hank found out about Kyle, and Lainie discovered that the two men she was two-timing were old friends from Muddy Gap. What are the chances? Lainie is quite happy to tuck tail and run from her slutty mistake. . . but both Hank and Kyle don’t like the idea of giving her up so easily. So they make a compromise. . . a ménage compromise.

I have to hand it to Lorelei James – she writes thinking women’s erotica. It’s all well and fun to give a girl two cowboys to play with. . . but Ms. James goes one better and gives her smutty storylines real heart, and surprising depth. I thought she did it really well in ‘Rough Riders’ book #6, ‘Rough, Raw and Ready’ – and she does it even better in ‘Corralled’. For one thing, the threesome doesn’t come easy to any of the parties involved. The men are uneasy (without being homophobic) and aside from logistical problems, Lainie is concerned for everyone’s feelings. I loved the fact that Lorelei James went beyond just the hot sex (which, consequently, there is plenty of) and asked the questions her readers were probably dying to explore. The in’s and out’s of a ménage à trois relationship.

Kyle punched him in the arm. “It’s a damn cryin’ shame we can’t just share her until she makes up her mind which one of us she likes better.”
Hank’s beer bottle stopped halfway to his mouth. “You know, that ain’t a half-bad idea.”
“I was kiddin’.”
“I’m not.”
“Seriously? Like I’d get her Friday night and you’d get her Saturday night? Hank. Buddy. You know that’d never work. Especially when we’d be in the same town, knowing exactly what’s goin’ on behind closed motel doors. Maybe in the motel room right next door.”
“True. But what if. . .?”
Now he’d piqued Kyle’s curiosity. “What if. . .?”

The title should also give something away as to the greater exploration of the book. ‘Corralled’ meaning animal pens and enclosures – confinement. The book is ultimately about Lainie being with Hank and Kyle together, in order to choose which one she wants to end up with. Now, ‘corralled’ isn’t exactly the nicest allusion to ‘monogamy’, but it was interesting to read Hank and Kyle’s one-upmanship and increasing pressure to out-perform one another. It made for some lovely, heated encounters for Lainie, and kept me guessing throughout the book. . . I honestly could not guess which cowboy Lainie would pick, and that kept the erotica interesting.

Fair warning, Ms James does go into lots of detail about the CRA (Cowboy Rodeo Association) and EBS (Extreme Bull Showcase). I still don’t know if those are real organizations, but quite frankly the entire bull-riding American cowboy thing is over my head. I love the idea of cowboys, but I don’t really understand the grand-standing spectacular of these cowboy events. James goes into detail about the behind-the-scenes politics of both organizations, and a few underhanded tactics that didn’t really pique my interest until the end. . . otherwise there was a lot of bull-riding factoids to wade through.

‘Corralled’ is the first book in Lorelei James’s new series, ‘Blacktop Cowboys’. There were a few characters in ‘Corralled’ that I hope we revisit in future books. . . like Hank’s siblings Abe and Celia, Lainie’s cowgirl best friend Tanna and the man who didn’t win Lainie’s heart. The second book ‘Saddled and Spurred’ sounds good, but introduces a whole new cast of characters. I love Lorelei Jame’s superior erotica writing, and her sensuous sex scenes, and I’m definitely sticking to ‘Blacktop Cowboys’, but I do hope she revisits the minor characters introduced in ‘Corralled’. 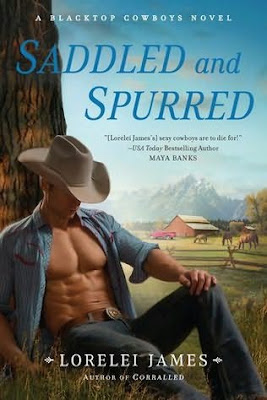