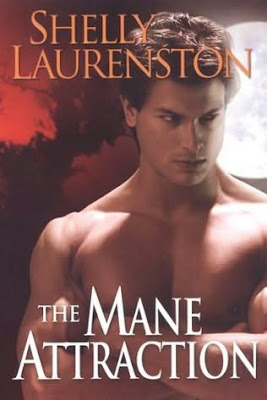 From the BLURB:
Weddings have the strangest effect on people. How else to explain the fact that Sissy Mae Smith woke up in Mitch Shaw's bed the morning after her brother Bobby Ray tied the knot? Or that gunmen are trying to kill Mitch, and Sissy Mae now has to escort a bleeding, stubborn, yet still incredibly sexy lion shifter to her Tennessee Pack's turf to keep him safe? It doesn't help that Mitch's appraising gaze makes her feel like the most desirable creature on earth, or that the ultimate stray cat is suddenly acting all kinds of possessive...Mitch is an undercover cop who's about to testify against some dangerous ex-associates. Even more worrisome, he's harbouring hot, X-rated fantasies about the fast - talking little canine - and he has to deal with every male in Sissy Mae's Pack sniffing around her in a way that makes his hackles rise. Mitch has his pride, and he intends to show Sissy Mae that when a lion sets out to make you his mate, the only thing to do is purr, roll over, and enjoy one hell of a ride...
‘The Mane Attraction’ is the third book in Shelly Laurenston’s fabulous ‘Pride’ series.
I have to admit, I had a little trepidation going into this third book. My hesitation centred on the heroine, Sissy Mae Smith.
We met Sissy back in first book ‘The Mane Event’ when she was introduced as Bobby Ray’s little sister, and Mace’s friend. But in the second book ‘The Beast in Him’ it was also revealed that Sissy was Jessica Ann’s childhood tormentor. Sissy was a high school bully, and Jessica Ann (now Bobby Ray’s wife) bore the brunt of Sissy’s Alpha attitude. This had me a little unsettled. Nobody likes a bully, and I wasn’t sure how I would like reading about a main character who is still quite proud of her bullying ways. . .
Sissy Mae Smith is one of the famed Smith’s. Their females, from Smithtown to Smithville, are notorious for being hot and mean. And Sissy is no exception. She has left hearts broken across the continent and been kicked out of more countries than you can shake a stick at. And she’s proud of her hedonistic ways. Sissy sees no merit in getting mated and whelped.
We met Mitch Shaw’s brother, Brendan, back in ‘The Mane Event’. Brendan married Sissy’s best friend, Ronnie Lee, and Mitch was introduced to the Smith clan, and Sissy. Ever since Mitch and Sissy have been thick as thieves. They have a purely platonic friendship based on mutual silliness and matching egos. But what Sissy doesn’t know is that Mitch is lying low. . . he’s a Philly cop who saw the wrong guy get whacked and now a mobster family is out to get him. After testifying in court Mitch will go into witness protection, never to be seen again . . . until Sissy and the Smith pack step in to help.
I really loved the fact that Mitch and Sissy started out as friends. It meant we got lots of glorious scenes of them just playing. They get along like a house on fire, and while there was always a crackling lust beneath their play, it was just plain fun to read them bounce off each other;

Sitting on his lap, Sissy gazed down at him. She pushed his hair out of his face and said, “Lord, all this hair.”
“Hey,” he corrected, “this is not merely hair. This is my mighty tawny mane. It’s a sign of my overwhelming manliness.”
“More like your overwhelming bullshit.”
He grinned. “That, too.”

And then, of course, when they do wake up to their attraction Shelly Laurenston pulls out her signature smut. And it is H-O-T. Both Mitch and Sissy unabashedly enjoy sex, and when they discover an admirable partner in each other, they embark on a hot and fun sex-romp;

Mitch pushed the door open and stood there looking too good to be remotely fair. He had on a fresh pair of sweatpants and . . . nothing else. They rode low on his hips, teasing cruelly. She wasn’t a saint, dammit!
“Sexy, sexy,” she growled at him before she could stop herself.
“You treat me like a whore.”
“You are a whore.”
He grinned. “This is true.”

I am a big Shelly Laurenston fan. I love her. I loved ‘Magnus Pack’ and I am loving ‘Pride’. But this is the first book of hers that left me slightly unsatisfied. And it’s purely to do with Sissy’s dubious history. In ‘Attraction’ Sissy’s brother, Bobby ‘Smitty’ Ray, has married Jessica Ann. The same Jessica Ann who Sissy tormented throughout high school. There is one scene in ‘Attraction’ where you think that maybe Jessica and Sissy have buried the hatchet and there is hope that they will become almost ‘friends’. . . but at the same time there was still an uneasiness about them, a still gaping wound that hasn’t quite healed. And Sissy remains unremorseful about her past bullying. That left me slightly uneasy. But it was the only thing in an otherwise unblemished book.
4.5/5