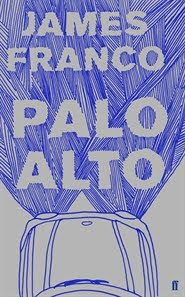 Received from the publisher
From the BLURB:
Palo Alto is the debut of a surprising and powerful new literary voice. Written with an immediate sense of place - claustrophobic and ominous - James Franco's collection traces the lives of an extended group of teenagers as they experiment with vices of all kinds, struggle with their families and one another, and succumb to self-destructive, often heartless nihilism.
In Lockheed a young woman's summer - spent working a dull internship - is suddenly upended by a spectacular incident of violence at a house party.
In American History a high school freshman attempts to impress a girl during a classroom skit with a realistic portrayal of a slave owner - only to have his feigned bigotry avenged.
In I Could Kill Someone, a lonely teenager buys a gun with the aim of killing his high school tormentor, but begins to wonder about his bully's own inner life.
These linked stories, stark, vivid, and disturbing, are a compelling portrait of lives on the rough fringes of youth.
‘Palo Alto’ is a collection of short-stories from Golden Globe winning actor, James Franco. Franco, as well as being an actor, artist and soon-to-be Oscars host, studied writing at Brooklyn College. ‘Palo Alto’ is the accumulation of his studies, and a life spent growing up in the Palo Alto area. . .
I admit that I wouldn’t have been interested in this collection of short stories if they weren’t penned by the (hunky) Franco. I've liked him since ‘Freaks and Geeks’, but especially for his winning portrayal of James Dean in a biopic. More than that though, I quite like actor-author books; Steve Martin and Dawn French amongst my favourites. So I was willing to put my crushing on Franco aside and give his first literary foray a read and earnest review . . . 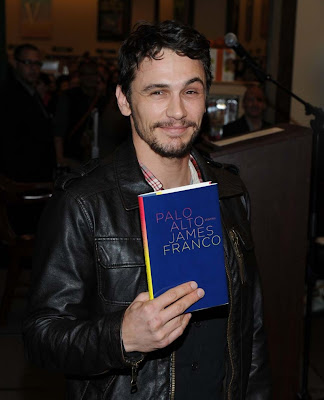 All of the stories are all set in Palo Alto, a Californian charter city. At its worst, the stories are along the lines of Seinfeld’s ‘a show about nothing’ . . . random snatches of nothingness amidst the mundane, with healthy doses of teen angst and selfish shenanigans.
But then some of Franco’s stories are more akin to the E4 ‘Skins’ storytelling. Set in a fairly disinteresting town, Franco tells tale of drunken teen hijinks, with dark undertones (from a careless teenagers’ hit and run to a girl witnessing a boy’s beating death at a house party).
One character in the first story ‘Halloween’ comments on life in Palo Alto:

It was a simple existence, when I look back on it now. I have friends who grew up in New York City, and the stories they have from their childhoods are amazing. Full of colour and culture and danger. I envy them.

It’s that sort of anti-Gossip Girl aspect of teen life. Not dissimilar to ‘Skins’, in that the stories are about an ordinary American town, with ordinary American kids doing ordinary (if hair-raising) things. There’s a lot of truth here, told in a stark and cold manner;

I really liked some of Franco’s storytelling. He writes the bare bones of teen life, often with dead-pan hilarity.
But while reading ‘Palo Alto’ I couldn’t help but think James Franco’s work is a little self-indulgent. Sometimes it’s startlingly obvious that Franco is just a recent literary graduate whose favourite book is J.D. Salinger’s ‘Catcher in the Rye’ and he’s trying to write a pale, contemporary comparison. Some of the ‘Palo Alto’ stories do read like the English 101 homework of an angst-ridden Emo teen. And it’s a shame. Because if these weren’t frayed short-stories with only the Palo Alto setting to connect them . . . if Franco had an actual plot to revolve these characters around, he could be great. If there was a plot-trigger, something to kick-start these mundane snatches of life, then Franco could be like the next Donna Tartt – writing about young-adult mundanity with dark undertones.
As it is, ‘Palo Alto’ is a glimpse at what James Franco can do, but not his best work. I think that will come later, and with plot.
2.5/5
Posted by Danielle at 7:45 AM