From the BLURB:
Ten years after Blayne Thorpe first encountered Bo Novikov, she still can't get the smooth-talking shifter out of her head. Now he's shadowing her in New York-all seven-plus feet of him-determined to protect her from stalkers who want to use her in shifter dogfights. Even if he has to drag her off to an isolated Maine town where the only neighbors are other bears almost as crazy as he is...
Let sleeping dogs lie. Bo knows it's good advice, but he can't leave Blayne be. Blame it on her sweet sexiness-or his hunch that there's more to this little wolfdog than meets the eye. Blayne has depths he hasn't yet begun to fathom-much as he'd like to. She may insist Bo's nothing but a pain in her delectable behind, but polar bears have patience in spades. Soon she'll realize how good they can be together. And when she does, animal instinct tells him it'll be worth the wait...
‘Beast Behaving Badly’ is the fifth (and coolest titled) book in Shelly Laurenston’s epically awesome ‘Pride’ series.
Bo Novikov is a demon on the ice . . . well, a hybrid half lion/polar bear to be more precise. He is one of the most feared ice hockey players in the game. He has a take no prisoners approach to the sport, he doesn’t play fair but he does put the ‘ME’ in team. It’s his puck, after all.
During one particularly bloodied game, Bo spies the little wolfdog, Blayne Thorpe, in the crowds and is instantly intrigued. Perhaps it’s not a good omen that upon first introductions, Blayne mistakes Bo and his hulking form for a would-be serial murderer;

“Blayne – ”
Blayne gasped, cutting him off. “How do you know my name? How long have you been hunting me? Well, you can take your cellar of death where you keep all the bodies of the women you’ve slaughtered over the year and go to hell. Because this target, which you probably refer to as ‘it’ in your head to keep me as merely an object, is not going down without a fight!”

But once Blayne calms down enough to realize that Bo is in fact a hockey star and not a serial killer, she turns advantageous. Blayne begs and pleads Bo to break his rigid training schedule and help her train for her derby battles. Soon, the pair forms an unlikely friendship that is soon thrown into danger when Blayne is hunted down by humans who want her for their hybrid cage-fights. Bo whisks Blayne away to Ursus County and his fellow bear family where things take a turn for the steamy. . .
It’s no secret that I love Shelly Laurenston and worship at the altar that is her ‘Pride’ series. ‘Beast Behaving Badly’ is yet another paranormal romance triumph and worthy of high-praise.
First off, Bo and Blayne have one of the kookiest and funniest first meetings of any couple I have ever read. Yes, she thinks he is a serial killer and hides away from him in a bathroom where he is forced to rip a door of its hinges in order to invite her out to coffee. It’s awkward and hilarious and I loved it!
Blayne was first introduced in the fourth ‘Pride’ novel, ‘The Mane Squeeze’. I loved her then but I adore her after reading ‘Beast Behaving Badly’. Blayne is constantly running at full-tilt; she says what’s on her mind and can be as entertained by a squirrel as she can by chasing her own tail. Badgers are out to get her and sugar sends her nuclear. She is hyper and incredible and I loved her.
Bo is Blayne’s polar (ha!) opposite. He’s inflexible and determined – he likes lists and schedules and detests tardiness. He needs a little Blayne in his life to shake things up and wake him up. These two are too cute (as all of Laurenston’s couples tend to be) they were snarky but lustful;

“Don’s sashay away from me,” he murmured, enjoying the view.
She gasped, stopped. “I do not sashay anywhere.” She talked with both hands now without facing him. “I may saunter. Even glide. But I do not sashay. That is for the ladies of the night.”

So, I read ‘Beast Behaving Badly’ with a somewhat heavy heart. Because now I'm at the end of the ‘Pride’ series, for the time being. The sixth novel is ‘Big Bad Beast’ and will be about Ric Van Holtz and the wolf who has him in a tizzy, Dee-Ann Smith. But I have to wait until May for the release. MAY!?! I'm going to have to go through Laurenston’s pseudonym G A Aiken backlist just to tide me over.
That being said, I do hope that ‘Big Bad Beast’ won’t be the last in the pride series. I really want to read Johnny and Kristan’s story – the wolfdog and wolf teenagers of Jessica Ann’s pack. These two are so cute and I'm loving their puppy-love side story. Fingers crossed they get a full-blown book!
5/5 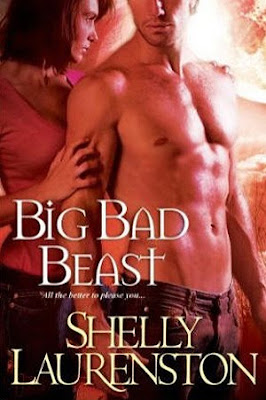