'A Discovery of Witches' by Deborah HARKNESS 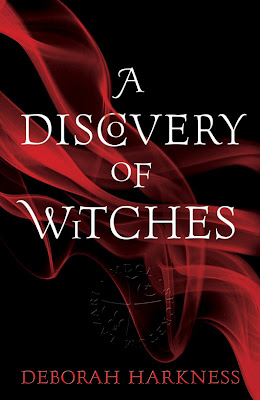 Received from the Publisher
From the BLURB:
When historian Diana Bishop opens an alchemical manuscript in the Bodleian Library, it's an unwelcome intrusion of magic into her carefully ordered life. Though Diana is a witch of impeccable lineage, the violent death of her parents while she was still a child convinced her that human fear is more potent than any witchcraft.
Now Diana has unwittingly exposed herself to a world she's kept at bay for years; one of powerful witches, creative, destructive daemons and long-lived vampires. Sensing the significance of Diana's discovery, the creatures gather in Oxford, among them the enigmatic Matthew Clairmont, a vampire geneticist.
Diana is inexplicably drawn to Matthew and, in a shadowy world of half-truths and old enmities, ties herself to him without fully understanding the ancient line they are crossing. As they begin to unlock the secrets of the manuscript and their feelings for each other deepen, so the fragile balance of peace unravels...

‘A Discovery of Witches’ is the debut paranormal novel from Deborah Harkness.

I was initially intimidated by this 592-page extravaganza . . . but I've been reading very good reviews and was encouraged by more than a few people to persevere. So I did, and I was rewarded.

Diana is the last of the Bishop witches. An ancient and powerful line dating back to the Salem witch trials, Diana is a witch twice-over. Her mother was a Bishop, and her father a Proctor, an esteemed magician in his own right. But Diana’s powerful parents were killed by humans when she was just eight-years-old, and she has been scarred ever since. Diana made a promise to herself a long time ago, that she didn’t need magic. She would not be taught by her aunts, Sarah and Emily, and she would never rely on a coven of sister-witches.

Diana spent her young adulthood trying to control her compelling magic, and in adulthood she has devoted herself to academics instead of spirits. She is one of the youngest professors at Oxford University, specializing in alchemy and spending her time with dusty manuscripts. She lives a quiet, orderly life devoid of magic . . . until the day the magic finds her.

An old and mysterious book arrives for Diana’s perusal. In the hush of Oxford’s Bodleian Library, Ashmole 782 sings to Diana. It is a book of great power and many secrets, and Diana is terrified. . .

The moment the book sits before her, strange things start happening. Other witches cast her envious glances. Demons begin sending her kisses and stalking her in the stacks. Her apartment is broken into. And Diana meets the mysterious and breath-taking vampire, geneticist Professor Matthew Clairmont.

Matthew has been hunting down Ashmole 782 for centuries. The old alchemical book is said to hold a great many secrets about the supernatural races – demons, witches and vampires. But Diana is the first in hundreds of years to break the spell and read the book. Now all those supernatural races are curious and enviable of Diana, and she is in great danger. Matthew doesn’t know why he cares so much, but he is drawn to Professor Bishop. She shimmers, and her blood entices. She uses magic all the time, every day, without realizing it. She is an enigma who calls out his most territorial behaviors. 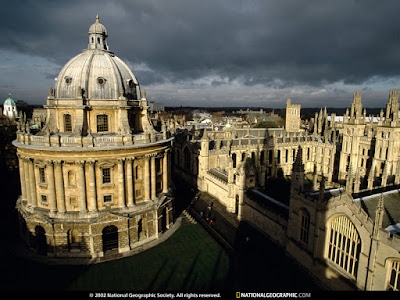 ‘A Discovery of Witches’ is no light read. At 592-pages, this novel is epic and sprawling – an absolute feast of fantasy that will engross and imprint on you. There’s a little bit of every paranormal pleaser, from witches to vampire and daemons. There’s a star-crossed inter-species romance and twining, interlocking mysteries that draw on history, science and speculation. ‘A Discovery of Witches’ is really a paranormal saga.

The novel does have a slow start, but only because Harkness’s epic storytelling demands calm before the storm. The meandering opening lulls the reader, and Diana, into a false sense of security. The Oxford setting is wonderful, with Harkness evoking the Gothic spires of the old school with a supernatural twist, as Diana is surrounded by student daemons and vampiric professors. In the opening we learn about Diana and her difficult childhood, losing her parents at a young age and rejecting her magic because of their deaths. Diana has led an ambitiously academic life ever since, rejecting the covens of Oxford and her aunts attempts to bring her into the sisterhood . . . until Ashmole 782 lands on her desk and helps unleash her magic.

The novel kicks into a higher-gear when Diana meets Professor Matthew Clairmont – a fifteen-hundred-year-old vampire. In this world, there is barely-suppressed hostility between the demons, witches and vampires. But Diana and Matthew have an immediate connection – there is lust and home between them.

“It’s not your scent that pleases me. I can hear your witch’s blood as it moves through your veins.” Matthew’s cold lips were against my ear, and his breath was sweet. “Did you know that a witch’s blood makes music? Like a siren sings to the sailor, asking him to steer his shop into the rocks, the call of your blood could be my undoing – and yours’.” His words were so quiet and intimate he seemed to be talking directly into my mind.

Once Diana and Matthew begin their illicit affair, the novel really sizzles and the mystery burns. Diana’s powers are coming fast and furious since stumbling upon Ashmole 782 and meeting Matthew. But does her vampire lover want her, or the secrets of the book?

“He’s not my vampire.” I flushed.
“Are you sure?” she asked, staring into the chrome on the espresso machine as if it were a magic mirror.
“Yes,” I said tightly.
“A little book can hold a big secret – one that might change the world. You’re a witch. You know words have power. And if your vampire knew the secret, he wouldn’t need you.” Agatha’s brown eyes were not melting and warm.

The romance between Matthew and Diana is the big draw-card of Harkness’ novel. The romance is as sprawling and epic as the mystery itself. Matthew has a shady past; murders weigh on his conscience and the constant pull of Diana’s blood is a cocked-gun waiting to go off. These two have a lot to contend with, but theirs is a tender and fated romance to invest in. 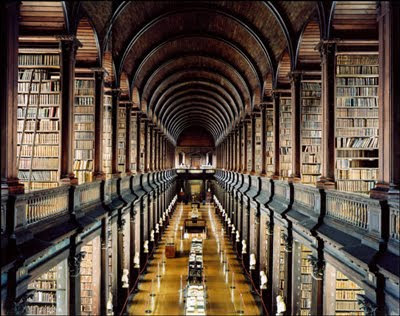 Deborah Harkness’ ‘A Discovery of Witches’ is ‘Practical Magic’ meets Donna Tartt. There’s a little bit of paranormal for everyone and a fantastic old-world scholastic setting. The mystery of the book is captivating and twisted – especially when it’s so closely connected to Diana’s emerging witchy powers. The novel does end on a question-mark cliff-hanger . . . but ‘Discovery’ is the first book in what will be a series from Harkness, and I can’t wait for more. Yes, this is a whopping 592-page book; but that just means there’s more paranormal to love and a romance to really get invested in. Brilliant.