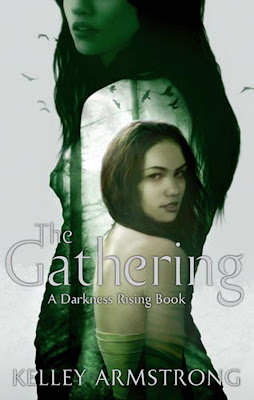 Received from the Publisher
From the BLURB:
Maya Delaney has always felt a close bond with nature. The woods around her home are a much-loved sanctuary - and the pawprint birthmark on her hip feels like a sign that she belongs.
But then strange and terrible things begin to happen in the tiny medical-research town of Salmon Creek (population: 200). The captain of the swim team drowns mysteriously in the middle of a calm lake. Mountain lions appear around Maya s home, and won t go away. Her best friend, Daniel, starts experiencing bad vibes about certain people and things. One of those people is Rafe - the new bad boy in town. What is he hiding - and why is he suddenly so interested in Maya . . . ?

* ‘The Gathering’ is a spin-off book from Kelley Armstrong’s ‘Darkest Powers’ trilogy. ‘Gathering’ can be enjoyed without having read the previous trilogy. But for the purposes of this review, I will be writing in the context and framework of the ‘Darkest Powers’ universe. So . . . SPOILER warning if you haven’t read that series yet!

Maya Delaney has had an idyllic childhood. It might have started out Dickensian, what with her birth mother abandoning her as a baby. But Maya lucked-out in the adoptive parent department, and when she was a child her father was offered a job as Salmon Creek park ranger. Maya and her family have lived in the idyllic Vancouver Island research town ever since. A picturesque woodland town, population 200, which is home to the families of the various scientists and office personnel that work for the St. Cloud drug company. Competitive business and corporate spies mean that the St. Cloud institute needed a remote, tight-knit community town to house their scientists and their families, and conduct their research in privacy.
Maya’s life was pretty amazing. She grew up with the same sixty-eight kids and has been in the same classes with all her close friends since primary school. Living in the middle of the woods means Maya has had her entire life to cultivate a love of the outdoors and animals, and she looks after injured wildlife as a hobby.
Maya’s life was amazing – until her best friend died. Serena drowned, and everything seemed to change.

They dragged the lake that afternoon and found Serena’s body. Her death was ruled an accidental drowning. A healthy teenage girl, captain of the swim team, had drowned. No one knew how it happened. An undertow. A cramp. A freak panic attack. There were plenty of guesses but no answers.
Soon all that was left of Serena was a monument in the school yard. The town moved on. I didn’t. Something had happened in that lake, something I couldn’t explain. But I would. One day, I would.

Six months later and Maya and her best friend, Daniel, are still living in the aftermath of Serena’s mysterious death. Maya is only just beginning to cope with her loss when a mysterious bad boy shows up in Salmon Creek. Rafe is persistently interested in Maya, but why her? A crazy old woman has accused Maya of being a witch, and at night she has nightmares about running – running and jumping on four legs and feeling at home for the first time in her life.
‘The Gathering’ is the first book in Kelley Armstrong’s new ‘Darkness Rising’ young adult paranormal series. This new series is actually a spin-off of the ‘Darkest Powers’ trilogy and both are set in the same universe as her adult paranormal ‘Women of the Otherworld’ series.
‘Darkest Powers’ followed the story of Chloe, Simon, Tori and Derek – four teenagers who met at the Lyle House, a retreat for ‘troubled teens’, but discovered they were a part of a disturbing science experiment for the Edison Group. These teens discovered they had various powers and abilities – from seeing the dead, to witchcraft and being able to turn into a werewolf. It turned out that the Edison Group had equipped many children with these and many more special abilities – natural occurrences that were amplified to a dangerous degree by the Edison Group . . . until those same scientists decided their experiments were too dangerous, and had to be terminated. Every last one of them.
Kelley Armstrong concluded the ‘Darkest Powers’ trilogy with ‘The Reckoning’, the third and final book about Chloe and the gang. But while there were many fulfilling personal and relationship conclusions in that book, Armstrong left plenty of loose ends about the Edison Group - ensuring she could write a plethora of stories associated with the shady supernatural science experiments . . .
. . . And that’s why ‘The Gathering’ is permeated with goose-bumped foreboding. Fans of ‘Darkest Powers’ will be going into this new book with more knowledge about the Edison Group and their experimentations than the new characters we are meeting. Maya and her friends have no idea what’s in store for them. They don’t even know that they are living right in the middle of their own science experiment – but we do. Readers are always one step ahead of Maya, constantly waiting for the fallout and the moment she uncovers the truth about who, and what, she is.
Kelley Armstrong has done an incredible job with ‘The Gathering’. On the one hand, she is continuing the story of the Edison Group and adding to the history we learnt from Chloe’s story. But similarly she has managed to imbue the book with ominous tones and frightening twists as readers go on a whole new journey. It’s made all the more frightening for Maya’s ignorance – she genuinely loves the town of Salmon Creek, she enjoys being close to nature and living in a close-knit community. Meanwhile, a statue dedicated to researcher Samuel Lyle has pride of place in the centre of the township.
There are little hints that Maya’s world is imperfect. Like her witnessing the drowning of her best friend, Serena. Her best friend’s father being an abusively truthful drunk. Or Rafe, the bad boy new kid in town who has taken to an annoying flirtation with her. But for the most part ‘The Gathering’ is all about the slow creep – as Armstrong lays the foundations for big reveals. This first book sees Armstrong building up Maya’s Salmon Creek paradise – setting it up so that in future books her paradise will be lost (to the mysterious Genesis Project?).
There are still a few Armstrong trademarks in this new series – like an interestingly complicated romance. There’s less love triangle than Chloe experienced (between Simon and Derek). But Maya’s romance is complex for very different reasons . . . all of which would be huge spoilers.
I loved ‘Darkest Powers’, and I am set to become equally obsessed with ‘Darkness Rising’. ‘The Gathering’ is chilling for its innocence – these new characters have none of the knowledge that the ‘Darkest Powers’ characters attained over three exhilarating books. Now it’s a waiting game – as readers anticipate the destruction to come when Maya and her town uncover the truth about the St. Cloud institute and the Genesis Project. I'm definitely going to be along for the ride.
5/5
'The Gathering' comes out April 12th 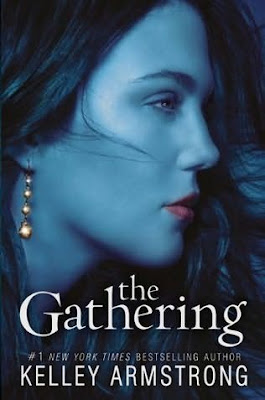 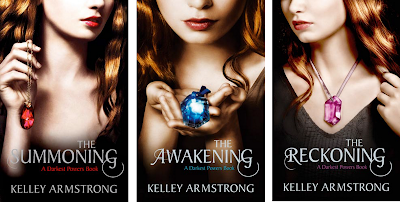