'Sing You Home' by Jodi PICOULT 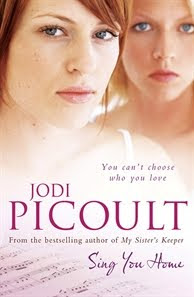 Received from the Publisher
From the BLURB:
Zoe Baxter has spent ten years trying to have a baby, and finally it looks as though her dream is about to come true - she is seven months pregnant. But a terrible turn of events takes away her baby and breaks apart her marriage to Max. In the aftermath she throws herself into her career as a music therapist. When Vanessa, a guidance counsellor, asks Zoe to work with a suicidal teen, Vanessa and Zoe's relationship moves from business to friendship and then, to Zoe's surprise, blossoms into love.
When Zoe allows herself to start thinking of having a family again, she remembers that she and Max still have frozen embryos they never used. Max, meanwhile, has found peace at the bottom of a bottle, until he is redeemed by an evangelical church where the pastor has vowed to fight the 'homosexual agenda' that threatens traditional family values. This mission becomes personal for Max when Zoe and her partner want permission to raise his unborn child.
Sing You Home is an honest and moving story of contemporary relationships and the consequences of love and desire colliding with science and the law. From tragedy to self-discovery and joy, Zoe, Vanessa and Max will realise the undeniable truth - that you can't choose who you love.
Zoe and Max have been trying to have a baby for nine years. Nine years of needles and medicine, IVF treatments and fifteen-thousand dollar injections that don’t work. Nine years until Zoe is the closest she has ever been to becoming a mother . . . 28 weeks pregnant and it looks as though nine years of trying will finally pay off . . . until it doesn’t, and Zoe has a stillborn.
Max has had enough. His wife is forty-years-old now, the wrong side of statistics for successful IVF treatments. He doesn’t want to try for heartbreak anymore. He doesn’t want to try for a baby, and he doesn’t want to try for Zoe either. So he files for divorce.
While Max finds answers at the bottom of a bottle, Zoe trudges through her life believing she has lost her last chance for a baby. And then she meets Vanessa. Vanessa is a school counsellor who has employed Zoe as a music therapist . . . and then she becomes Zoe’s best friend. And then she becomes the one person Zoe can’t live without.
Max drank to forget and to feel. Max drank, and almost killed himself – until Jesus saved him. After a near-death experience, Max is welcomed into the fold of the Eternal Glory Church. Max is born again, and he can see the mistakes he made with Zoe. Mistakes he vows to never make again, now that Jesus is his personal lord and savior.
Zoe and Vanessa are in love, and they want a family. It doesn’t matter that the state of Massachusetts doesn’t recognize their marital status, or that Zoe has never felt more targeted than when she walks down the street holding Vanessa’s hand. They want a family, because they know they have love to give. So when Zoe suggests using her and Max’s remaining three frozen embryos, it seems motherhood is within reach for her once more.
But if Zoe can claim the embryos are hers by biological right, then Max can claim the same. And Max steadfastly believes that Jesus Christ does not want his deviant ex-wife to raise his children in a house of homosexual sin.
I always have to prepare myself for a Jodi Picoult book. Because I know what will happen while I read one of her novels – I will be turned into a blubbering mess as I read vicariously and viscerally about the characters. I know that Jodi Picoult books are mostly formulaic – take a water-cooler issue; leave it to simmer and hit close to home, then sprinkle with a little courtroom drama for a finishing touch. I know this, and yet Picoult gets me every time! Without fail, I will find myself hiccup-crying throughout her books and muttering insults and “oh my gawd's!” through the reading. And she does it to me again in ‘Sing You Home’. . .
The first-half of the book follows Zoe and Max through the stillborn birth of their IVF baby, a tragedy that proves to be the final straw that breaks their nine-year marriage. Picoult’s exploration of IVF and the couples who navigate the peaks and valleys of infertility treatments is interesting in itself.
Picoult writes about infertility from the perspective of the husband. Max has a low sperm count, and when coupled with Zoe’s own infertility issues the pair spend their nine-year marriage in and out of fertility clinics, ruled by Zoe’s ovulation and bankrupted by expensive IVF treatments ($15,000 a pop!). Mostly when infertility is mentioned it’s to the sympathies of the mother who can’t conceive. After all, what is more natural and womanly than childbirth? The very yardstick by which society measures a woman’s femininity and worth. Picoult observes how all-consuming the baby race can be as Zoe admits to letting pregnant friends fall by the way-side out of spite and jealousy over her own inability to conceive. Until, nine years later, Zoe and Max are wholly-consumed by their baby needs. All what’s left in their marriage is scheduled-injections and money crunching for more treatments.

Picoult delves in Max’s mindset, at being unable to impregnate his wife. The humiliation of having to fill up a plastic cup and walk into a clinic where everyone knows what goes on behind closed doors. More than that, Max articulates the seemingly overwhelming emphasis that society places on fertility and reproduction. And she raises some interesting points;

Even the sex symbol celebrities who make women swoon, like David Beckham and Brad Pitt and Hugh Jackman, are always in ‘People’ magazine swinging one of their children onto their shoulders. (I should know; I've read nearly every issue in the waiting room of the IVF clinic.) This may be the twenty-first century, but being a real man in still tied to being able to procreate.

All of this is very interesting, and heartbreaking, but not terribly Picoult-esque. Anyone who has read a Picoult book knows that she thrives in the gray areas – her stories burst to life with contentions and tensions. And so I spent the first-half of ‘Sing You Home’ wondering where the drama lay in the heartbreak.
. . . And then Zoe falls in love with a woman, while Max is ‘born again’. Zoe wants to use the embryos she and Max created to get her new wife pregnant.
Ah, there’s that drama!
As the story begins and Zoe miscarries, only to be divorced by her husband, she seems sure to be the wronged party. Readers (the majority of whom will be female) may think the story black and white, Max malicious and Zoe wounded. But Jodi Picoult is best for her shades of gray. She doesn’t give her readers an easy out; her characters are neither heroes nor villains, and she refuses to write situations that have clear paths and obvious conclusions. At least, this is where Picoult normally excels.
I will admit that in ‘Sing You Home’ Picoult is heavy-handed with the religious right. She does portray them as hate-mongers and uneducated bible-thumpers. By contrast, Zoe and Vanessa are two smart, caring and witty young women (a school counselor and music therapist who works with burn victims and abused children, respectively). ‘Sing You Home’ is one of the few Picoult books that occasionally lapses into shades of black and white. . . Admittedly, I am one of those who think that religion has no right to say who anyone should love, let alone marry. I support gay marriage (and wish that Julia Gillard did too). But even I thought that Picoult was painting a very villainous picture of religion in this book.

If reading Jodi Picoult has taught me anything, it’s that there are never just two sides to a story – there’s more like twenty-two. But in ‘Sing You Home’ Picoult seems reluctant to write beyond the open-minded GLAAD (The Gay & Lesbian Alliance Against Defamation) and evilly close-minded religious right.
I missed Picoult’s trademark unbiased writing when it came to the politics in ‘Sing You Home’. But that doesn’t mean she didn’t sucker-punch my emotions while reading this book. As always with a Picoult book, I learnt a little something – about IVF treatments, the legal standing of gay couples in America and the religious foundations that inform ‘right to life’ campaigns. I blubbered, I power-read in one day and I definitely intend to pass this book on to friends and family... Picoult may have a formula, but it’s a winning formula to be sure!
4/5 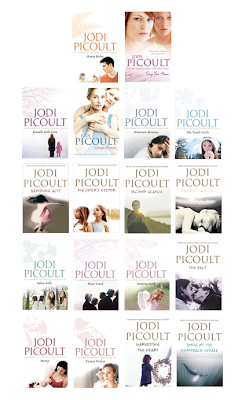