'One Day' by David Nicholls 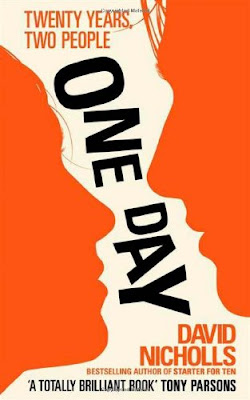 Emma and Dexter meet for the first time on the night of their graduation. Tomorrow they must go their separate ways. So where will they be on this one day next year? And the year after that? And every year that follows? Twenty years, two people, ONE DAY.

Emma Morley and Dexter Mayhew have been attending the same university for four years . . . but they only properly meet on the day of graduation.

Emma Morley is an idealistic English and History major who truly believes she can change the world (or at least her little corner of it) with hard work and passion. She has had a crush on the impossibly handsome Dexter for four years now, and is both horribly ashamed of her infatuation with someone so self-obsessed, but also terribly nervous that she will never see him after their one night together. . .

Dexter is an anthropology student (sort of) who has breezed through university with more drunken memories than grade-point-averages. He had never really taken much notice of Emma Morley, with her thick-framed glasses and badly cut hair. But something about tonight (their last night before the impending doom of adulthood) has seen Dexter enamoured of Emma’s close-lipped smile and owlish eyes. But Dexter knows how their little flirtation will end – with him walking out the door and never thinking of her again. . .

Little do Emma and Dex (Dex and Em) know that the day they meet – July 15th, 1988 (St. Swithin’s Day) – will be the beginning of a beautiful friendship that spans 20 glorious years.

‘One Day’ is the best-selling 2009 novel from British writer David Nicholls.

I have had this novel sitting on my shelf since 2009. I bought it because I loved Nicholls’s ‘Starter for Ten’ and had it on good authority that ‘One Day’ was another incredible read. But it wasn’t until I saw the trailer for the upcoming film adaptation that I was intrigued enough to finally crack the book open . . . and I'm so terribly glad that I did.

‘One Day’ begins in 1988, when Emma Morley and Dexter Mayhew attempt to salvage the tatters of an attempted one-night-stand by agreeing to be civil and even, absurd as it sounds, friends. Neither of them have much faith in the other to carry through with the offer . . . but then we jump ahead to the same day one year later when Dexter is travelling (to ‘broaden the mind’) and Emma is stuck in another dead-end job and outpouring her disappointments to her dear friend, Dex, in letter form.

And so the novel continues. Each chapter is another year in the life of Dexter and Emma, a snapshot of the day they first met, July 15th, every year for twenty years. We read how their lives are intersecting, drifting or overlapping as they navigate an oddball friendship that amazingly stands the test of time. It’s a friendship of highs and lows. Bitter rivalries and broken hearts. Infidelities and one-night-stands.

We meet Em and Dex in their idealistic early twenties, suffer through their mid-thirties, through to the foreboding middle-ages . . . There are years when they are each other’s soul-confidante; acting as touch-stones when they suffer through the death of a parent, and post-college down-trodden idealism. Then there are the years when they slowly drift apart – Dexter’s career ‘in the media’ sees him enjoying the success and excess of fame, while Emma feels like a second-fiddle friend with a ho-hum teaching career. But they always find a way back to each other, eventually.

Their relationship is that of opposites-almost-attracting. Emma cannot deny that she had a crush on Dexter for four long years at college. But when they become friends Emma accepts that Dexter is firmly set in his lad-about-town, caddish ways and will never see her as anything other than a friend. Likewise, Dexter is inexplicably drawn to Emma – her wry wit and earnest disposition that is so different from the usual chits he attracts. Emma and Dexter love one another – they are never better than when they are in each other’s presence. They become funnier, more confident, more honest and simply better. But their romantic relationship is one of near-misses and almost’s. Love letters that never get sent. Phone calls that go unanswered. One of them enters into a relationship just as the other accepts singledom . . . all of this spanning 20 long years, until the stars finally align and Em and Dex (Dex and Em) accept what everyone else has always known about their relationship.

“When we first met, at University, before we became, you know, pals, well, I had a bit of a crush on you. Not a bit of a crush, a massive crush actually. For ages. Wrote dopey poems and everything.”
“Poems? Really?”
“I'm not proud of myself.”
“I see. I see.” He folded his arms, put them on the edge of the table and looked down. “Well I'm sorry, Em, but that doesn’t count.”
“Why not?”
“Because you said it had to be something that I didn’t know.” He was grinning, and she was reminded once more of his almost limitless capacity to disappoint.
“God, you’re annoying!” She slapped the reddest part of his sunburn with the back of her hand.
“Ow!”
“How did you know?”
“Tilly told me.”
“Nice one, Tilly.”
“So what happened?”
She looked into the bottom of her glass. “I suppose it was something you get over in time. Like shingles.”
“No, really, what happened.”
“I got to know you. You cured me of you.”
“Well I want to read these poems. What rhymes with ‘Dexter’?”
“‘Bastard’. It’s a half-rhyme.”

Dexter Mayhew was brilliant. He’s a layered character, constantly changing throughout the novel. He is initially a little bit awful – at one point deciding he wants to take up photography because he likes the idea of picking up chicks with the line “I'm a professional photographer”. In the beginning he’s as deep as a puddle and egotistical to boot. It’s only in his scenes opposite Emma that readers are able to see his appeal. Emma makes him better – she pushes him to be honest and self-deprecating, she doesn’t give him an inch and calls him out on his glib insincerity. Dexter is at his funniest when he’s trying to keep up with Emma’s whip-quick wit. But he’s also frustrating – for as much as he is improved by Emma’s proximity, and as much as readers can read his betterment around her, he insists on one-night-stands with vapid misses and stone-cold beauties. It really does take Dexter 20 years to wake up to himself and realize what has always been right in front of him.

Emma and Dexter’s relationship was brilliant to read because it’s so bloody true. It’s a relationship based on what’s not said – all those words and truths that get lodged in your throat and stuck because you’re embarrassed or it’s not the right time or you might risk the friendship. It’s a romance based on ‘what if?’ and near-misses. Dexter and Emma are just two people – you may even have a Dex and Em in your friendship group. Two people who are so obviously meant to be together if they would just get their act together first!

What really impressed me in this book was how David Nicholls avoided the ‘big scenes’ but kept the novel interesting and the plot chugging. Each chapter is a snapshot of July 15th of that year. We only read what happens on that day – whether it be a disastrous job interview, a friend’s wedding, or a trip to Cornwall. Nicholls constantly references big events that are upcoming or have just been – like the death of a parent, or an impending marriage. But Nicholls never writes the actual scene – we never see the moment in the hospital room when the mother dies. Instead we read about the fall-out and repercussions of that event. It’s an interesting and unconventional way to write a book – sticking to the ‘one day a year’ format means that (realistically) all the big moments and dramas won’t all conspire to fall on that one day in July. But Nicholls hasn’t let that dampen the story or lessen the drama. This insistence on writing snapshots and aftermath means that the novel really does feel like a journey, and a relatable one at that.

‘One Day’ is a fantastically bittersweet story of a relationship that weathers the test of time. Emma and Dexter are two people who fell into their friendship, but managed to cling to it like a life-raft through 20 years of milestones and pitfalls, failures and triumphs . . . always with the knowledge that they were each other’s constant, the one person they could depend on in the whole world. I laughed (okay, snorted too) and wept bitterly throughout the novel. David Nicholls is an epic author of ordinarily extraordinary romance and ‘One Day’ is a must-read novel for young and old, men and women. 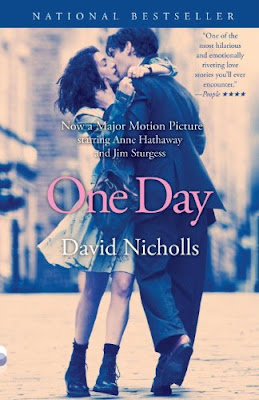 The film adaptation is set for August 19th release. It stars Anne Hathaway as Emma Morley, and Jim Sturgess as Dexter Mayhew. I'm actually really keen to see the movie (despite book fans online scepticism). Yes, Hathaway is American, not British (but I liked her fine as Jane Austen and everyone said that was blasphemy!). Jim Sturgess has been a favourite since ‘Across the Universe’. I know ‘One Day’ will be a hard story to adapt – what with Nicholls reluctance to write ‘big drama scenes’ in the book and the film medium kind of needing those high-drama moments. And, yes, some lines in the trailer are cringe-worthy corny: “whatever happens tomorrow, we have today.” But watching the trailer makes me happy and it was what prompted me to finally crack the book open in the first place – so there!
Posted by Danielle at 11:19 AM