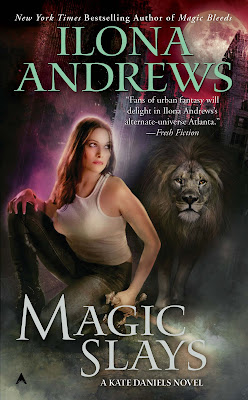 From the BLURB:
Plagued by a war between magic and technology, Atlanta has never been so deadly. Good thing Kate Daniels is on the job.
Kate Daniels may have quit the Order of Merciful Aid, but she’s still knee-deep in paranormal problems. Or she would be if she could get someone to hire her. Starting her own business has been more challenging than she thought it would be—now that the Order is disparaging her good name, and many potential clients are afraid of getting on the bad side of the Beast Lord, who just happens to be Kate’s mate.
So when Atlanta’s premier Master of the Dead calls to ask for help with a vampire on the loose, Kate leaps at the chance of some paying work. Turns out this is not an isolated incident, and Kate needs to get to the bottom of it—fast, or the city and everyone dear to her might pay the ultimate price . . .
Kate Daniels was raised to be a loner. The daughter of the world’s most powerful psychopath, Kate was hidden away from her father and trained to be a merciless killer. Isolation was instilled in her – no connections, no fear, no love and no loyalty.
But Kate’s life trajectory has well and truly veered off course in recent years . . . These days, Kate finds herself running an independent business (with no clients) and married to Atlanta’s pack Alpha, Curran. As pack consort she is dually responsible for the lives and well-being of thousands of shapeshifters. Not to mention her maternal role to adoptive daughter and ward, Julie.
So when an indeterminate threat with unknown but dangerous purposes goes missing and Kate is hired to locate it, she has more than just dollar-signs in her eyes. She has the safety of the pack on her shoulders, and those people she holds most dear.
‘Magic Slays’ is the fifth book in Ilona Andrews feverishly brilliant ‘Kate Daniels’ urban fantasy series.
The new Kate Daniels book is always a highlight of the New Year. Fans wait and anticipate; we rub our greedy little paws together in eagerness, salivating at the prospect of holding the book in our hands and lapping up the supernatural goodness that lives between the pages . . . And Ilona Andrews have done it again – they have met and exceeded fan expectations and lascivious keenness. ‘Magic Slays’ is a veritable smorgasbord of fantastical delight with a heavy dose of foreboding.
When the book begins, Kate and Curran are firmly embedded in marital bliss and the routine of marriage. Kate is taking her role as pack consort in stride (if not enthusiasm); fulfilling her role as Keep peace-keeper and touchstone for Curran and his many Alpha duties. Since their explosive coupling in ‘Magic Bleeds’, fans have been conflicted – at once desperate to read a loved-up Kate and Curran (as opposed to the dueling, tension-filled snarkiness of past books) while also crossing their fingers that marriage and mating wouldn’t translate to a ‘settled’ and lukewarm romance. Well, fear not. Married they may be, but Kate and Curran are still as fiery and combustible as ever. That spark of fierce chemistry that originally intrigued and delighted fans has been carried over to their marriage, except now they are living together in close-quarters. Fiery-hilarity ensues;

“People were about to die and I could save them. There was a girl... Anyway, I’m not hurt, I’ll be home for dinner.”
“As you wish,” he said.
My heart made a little jump. I love you too.
The tension in his voice eased. “You sure you don’t need your Prince charming to come and save you?”
The knot in my stomach evaporated. My Prince Charming, huh. “Sure, do you have one handy?”
“Oh, I think I could scrounge one up somewhere. As often as I have to rescue you . . . ”
“I’m going to kick you in the head when I get home. Repeatedly.”
“You could try. You probably need the exercise since you sit on your butt in the office all day.”
“You know what, don’t talk to me.”
“Whatever you want, baby.”

And despite the fact that Kate and Curran are ‘settled’, Andrews still has some curveballs and speed-humps for these two to overcome; except now there’s less walking-on-eggshells between them. Kate and Curran have to face their problems with one another head-on, or risk the entire Keep knowing about their disagreements. It makes for claustrophobic fights and sweet make-ups. Deep down I knew that Kate and Curran were a strong enough couple, not to mention independently fierce characters, and that marriage wouldn’t tone them down . . . furthermore, Ilona Andrews has spent four books building these two up into a lovable (if prickly) duo, and I knew that it wouldn’t all come crashing down with “I do.” Still, it’s nice to have any lingering doubts put firmly to rest – Kate and Curran are still smoking-hot, even when the ‘will-they-or-won’t-they’ has been put to bed. Phew!
‘Slays’ feels like the most character-conscious installment of the ‘Kate Daniels’ series. This book really brings all the secondary-characters out to play. Because Kate is living at the Keep now, all of the shapeshifter characters have a more prominent presence – Derek, Doolittle and Aunt B, they all leave their mark in this book. We also get to know some of the other pack Alpha’s; like the werewolf Jennifer and her mate. And Saiman, that shape-changing flirt is back and grating on Curran’s nerves! Even Kate’s ward, Julie, returns (hilariously and ingeniously) from her boarding school to step-up and take up a fair amount of page time. A new character is added in the form of a young male bouda heart-breaker called Ascaio. I really loved this new character, if only because I have high-hopes for a love triangle between Julie, Derek and Ascaio. I feel for Julie, I really do. She has loved Derek for so long but he only sees her as a sister (in all honesty I don’t know if he could ever feel anything else for her?). So I hope that the young Lothario, Ascaio, prompts some sort of a reaction from the werewolf – although Julie isn’t particularly impressed by the red-blooded Bouda, I hope their story-lines interweave in upcoming books (or a short story?)
And my favourite secondary-character of all, gun-slinging Andrea, returns from a two-month self-imposed exile. I love Andrea, and her side-story in ‘Slays’ is heart wrenching and infuriating. But as much as I love Andrea, her big draw-card for me is her romance with bouda Raphael. I love Raphael, and I have loved him and Andrea together sine reading their hot short-story in ‘Must Love Hellhounds’. So considering that ‘Magic Slays’ is teeming with secondary characters, I was bitterly disappointed that Raphael made no appearance. I am desperate to know the status of his and Andrea’s relationship – it can’t be over! Raphael’s no-show was my only complaint though, in an otherwise superb installment. I will just have to cross my fingers and hope that Andrews is cooking-up a big surprise for Andrea and Raphael (or at least a short story in an upcoming anthology. PLEASE?!)
All of these characters serve to remind Kate of what she has to lose. Kate’s life is so different from what it was in book #1 – as ‘Slays’ makes blatantly obvious, Kate is now intertwined with many lives. She has people she loves and cares about, and vice-versa. She has so much to lose now, and I think that’s why this installment is peppered with all the characters we (and Kate) have come to know and love . . .
‘Magic Slays’ feels like the beginning of the end; the calm before the storm, the lull before a crescendo. This is a book of anticipation. In the third book ‘Magic Strikes’, Kate came close to blowing her ancestry-secret. In ‘Bleeds’, Kate faced and defeated her aunt Erra. In ‘Slays’ she is concerned about Roland and discovering some uncomfortable truths about her childhood – particularly when she looks back at the past through the eyes of an adult.
Fans have some idea of where Ilona Andrews will have to lead Kate Daniels as we approach the series finale . . . we’ve known since discovering the truth of Kate’s paternity, and the consequences of her blood. Still, as all the pieces of the puzzle slowly fall into place, it becomes apparent that Ilona Andrews’ end-game has been lurking since book #1. Now it’s a matter of fans sitting back and marveling at the way they weave this finale – the anticipation, the shocks and horrors, and the gut-gripping wait for it all to come crashing down. Bring it on!
5/5

I was a little bit disappointed at the lack of Raphael in 'Slays', so I did some research to make sure Ilona Andrews weren't planning another Andrea/Raphael short-story (à la 'Must Love Hellhounds'). The good news is that there will be a 'Kate Daniels' short story in the 'Hexed' anthology - this will be the much anticipated Jim/Dali story (yay!). The other short story to appear later this year in the 'Angels of Darkness' anthology is reportedly unrelated to either the 'Kate Daniels' or 'The Edge' universe. So I guess that means we'll have to wait for Kate Daniels #6 for Raphael and Andrea to get their romantic act together... OR Andrea's story will be told in one of the two planned 'Kate Daniels' spin-off novels. Check the Twitter convo below for Ilona Andrews' almost-confirmation! 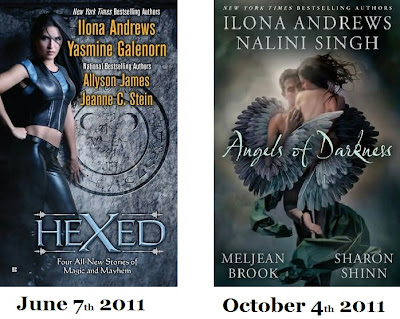 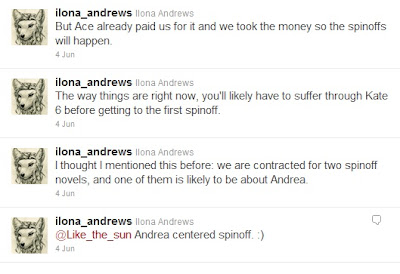