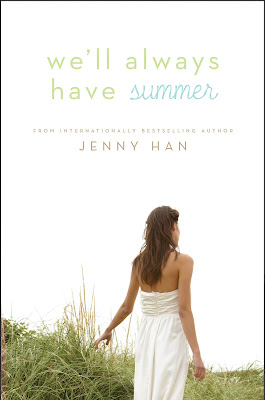 It's been two years since Conrad told Belly to go with Jeremiah. She and Jeremiah have been inseparable ever since, even attending the same college-- only, their relationship hasn't exactly been the happily ever after Belly had hoped it would be. And when Jeremiah makes the worst mistake a boy can make, Belly is forced to question what she thought was true love. Does she really have a future with Jeremiah? Has she ever gotten over Conrad? It's time for Belly to decide, once and for all, who has her heart forever.

Belly made her choice, and she chose Jeremiah. Conrad didn’t want her, may never have loved her, despite her ages-old devotion to him. But Jeremiah – he was always there, and Belly finally realized that. They have been together for two years now. Two perfect years of contentment and love, spent at the same university and heading in the same, permanent, direction.

But when that love is tested by a hurtful mistake, Jeremiah takes drastic measures to keep Belly. A proposal on the back of an apology, and suddenly Belly finds herself growing up faster than she may be ready . . .

I wanted this finale to go out on an explosive BANG – instead I got lukewarm and slight disgruntlement with this, the final installment to a wonderful contemporary romance series . . .

The book kicks off with a betrayal. Jeremiah does something not unusual, but still heartbreaking and disappointing. What follows is an appalling marriage proposal (on the back of an apology over a meaningless and regrettable one-night-stand). And Belly accepts. At the tender age of eighteen, Belly decides to marry Jeremiah Fisher and start a life with him. But her mother’s adamant disappointment in the whole affair is a tragedy, and Belly escape to Susannah’s summer house to finish planning her wedding (with just two months preparation before the big day!). But when she arrives at the summer house, she discovers a live-in resident in the form of Conrad, home from California and his premed studies. Belly has managed to run from her torn-in-two love for the Fisher boys, but an impending marriage to one of them stirs up old feelings for the boy she always thought she’d end up with . . .

I had a few grumbles with this finale. The first, and most annoying, was Belly’s seemingly stilted personal growth. When she discovers Jeremiah’s infidelity (via an overheard confession from the scarlet woman) she initially assumes his ‘hook-up’ was a kiss. Oh, dear. When she learns that ‘hook-up’ is college-speak for ‘sex’, Belly’s heartache is ten-fold. She is adamant on leaving him, and disgusted at their tainted love.

But when Jeremiah apologizes and proposes marriage (practically in the same breath) Belly is quick to forgive and put the past behind them . . . and, really, Jeremiah’s infidelity is hardly touched upon again. Belly doesn’t even think about his betrayal, nor discuss it with her friends . . . once that ring is on her finger, all is forgotten.

Sorry, but I wasn’t buying that. Forgiven, but not forgotten – and not when the boy in question is your first serious, *serious* boyfriend whom you picked colleges with and have known your whole life. Belly’s determined silence about Jeremiah’s hurtful mistake spoke volumes and turned into a character flaw on her part – making Belly into a child, content in her blissful ignorance. I would have at least liked a proper confrontation with the ‘other’ woman.

My second complaint about ‘Always’ was Jenny Han’s absolute character assassination of Jeremiah. The book begins with his unfaithfulness, and he only gets worse from there . . . devolving into a parody frat-boy whose glaring childishness made me cringe at every turn. The highlight was when he requested a Quentin Tarantino themed wedding (I’m still not sure if he was kidding. . . ?)

The ‘Summer’ series hinged on Belly’s growing into a young woman, and being torn between the brothers, Conrad and Jeremiah. In the beginning there was only ever Conrad for Belly . . . until he eviscerated her heart and forced her to question if he ever had feelings for her. Jeremiah, by contrast, was Belly’s loyal and stead-fast friend, the boy waiting in the wings hoping for the day when Belly would look away from Conrad long enough to notice him. . . this was a brilliantly complex love triangle. And Han started out by complicating matters further when she made both Conrad and Jeremiah true contenders for Belly’s heart.

I would always have Conrad in my heart. He would inhabit just that tiny piece of it, the little-girl part that still believed in musicals, but that was it. That was all he got. Jeremiah would have everything else – the present me and the future me. That was what was important. Not the past.
Maybe that was how it was with all first loves. They own a little piece of your heart, always. Conrad at twelve, thirteen, fourteen, fifteen, sixteen even seventeen years old. For the rest of my life, I would think of him fondly, the way you do your first pet, the first car you drove. Firsts were important. But I was pretty sure lasts were even more important. And Jeremiah, he was going to be my last and my every and my always.

In ‘Always’, there is no competition and no real conflict of love. Jeremiah bears no resemblance to himself from two books previous, and can therefore never be taken seriously as a contender for Belly’s love. By default, it has to be Conrad. Although, I wasn’t even overly thrilled with the choice of him. . .

In ‘Always’ we get Conrad’s POV alongside Belly’s. We come to understand his conflicted love for Belly, which came at the inconvenient time during his mother’s final months. We learn that Conrad decided to pretend he never wanted her, never loved her – thereby pushing Belly into Jeremiah’s arms. But now that his brother is marrying ‘his girl’, Conrad wants her back – for good and forever.

At one point in ‘Always’, Belly’s previously air-head friend, Taylor, makes the astute observation that Conrad is like a child. A little boy who put his toy down and walked away, but is now upset that someone else is playing with it. He’s like the dog in the manger. Throughout ‘Always’ Han tries to reconnect Conrad and Belly (via wedding preparations for her and Jeremiah’s wedding. Awkward!) but it feels forced and there’s a severely missing spark between them. I was inordinately annoyed when Conrad proclaimed his love for Belly, and asked her not to marry his brother. Big talk. But that’s all it was – talk. In my opinion, Conrad never did anything to earn Belly’s love. It was always her, chasing after him . . .

And that leads to my final complaint about ‘We’ll Always Have Summer’. We needed more. We needed at least another 250-pages to read Belly grow up and Conrad earn her love. Han rushes the ending, leaving present-time Belly on a sour note and dumped at the altar, only to summarize in the epilogue that she spent two years doing a lot of growing (student exchange to Spain!) and falling back in love with Conrad – enough to marry him. Skip to – happily-ever-after. But it’s too fast. By the end of ‘Always’ I still wasn’t convinced that Conrad was the guy for her. I needed to read him fight to regain her trust and fight for her, for them – I needed to read Conrad’s long, outpouring love letters to Belly while she was away in Spain . . . I needed to read the brother’s reconciliation since Jeremiah and Belly’s disastrous break-up. I needed more. Not this rushed amalgamation of a happily-ever-after tied up with a neat little bow.