'Act of Faith' by Kelly Gardiner 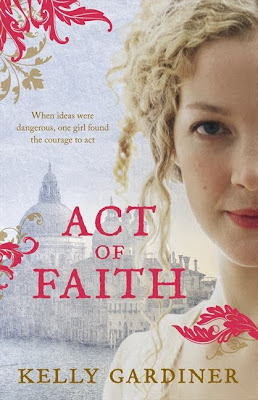 
When ideas were dangerous, one girl found the courage to act.

England, 1640. Sixteen-year-old Isabella is forced to flee her home when her father′s radical ideas lead him into a suicidal stand against Oliver Cromwell′s army. Taking refuge in Amsterdam and desperate to find a means to survive, Isabella finds work with an elderly printer, Master de Aquila, and his enigmatic young assistant, Willem.

When Master de Aquila travels to Venice to find a publisher brave enough to print his daring new book, Isabella accompanies him and discovers a world of possibility - where women work alongside men as equal partners, and where books and beliefs are treasured.

But in a continent torn apart by religious intolerance, constant danger lurks for those who don′t watch their words. And when the agents of the Spanish Inquisition kidnap de Aquila to stop him printing his book, Isabella and Willem become reluctant allies in a daring chase across Europe to rescue him from certain death.

The year is 1640 and Europe is on the brink of religious upheaval. Catholics in England are being executed, while other countries are burning ‘heretics’ at the stake unless they take up the Catholic faith. The Tribunal of the Holy Office of the Inquisition in Spain (aka ‘The Spanish Inquisition’) ride to maintain Catholic orthodoxy in their kingdoms – beating and imprisoning those who go against the church and God.

It is the worst time to be an intellectual. And Heaven forbid a man of intellect should wish to share his knowledge with others – to put pen to paper and give life to his musings. But that is just what Master Hawkins does – a teacher and a scholar, he is also a talented author with a most popular (if banned) book called ‘Discourse on Liberty’. Except, Master Hawkins is not alone in his scholarly pursuits. He gets a helping hand from his daughter, Isabella.

Isabella pens letters to her father’s overseas colleagues. She helps him with his notes and engages in constant intellectual battles with him. She lives a happy life, content to be pushed to her intellectual edge.

But then Oliver Cromwell’s army marches. Her father is imprisoned and accused of blasphemous dealings against God. When Isabella helps her father escape the stocks, tragedy follows them in a shipwreck on the way to Amsterdam. . . Isabella is suddenly alone in the world, an orphan.

She is taken in by a printer – Master de Aquila, an old friend of Isabella’s father and another intellectual zealot. Aquila is also walking a fine line, printing scandalous and informative books. But it is here that Isabella finds her rightful place – helping to create the words that will change the world.

When Master de Aquila is kidnapped like her father was, Isabella and a printing apprentice, Willem, decide to fight tooth and nail to save their master and protect a book that could see him burn at the stake.

Gardiner’s new novel is a sweeping historical saga that takes readers from Cromwell-ravaged England, Amsterdam, Germany, all the way to progressive Venice. In between we read the tentative peace of the English countryside, the canals of Venice and the Jewish Ghettos of Verona. The novel is expansive and impressive, and with Gardiner’s eloquent words and literary flair she acts as fictional tour-guide – breathing life into these cobblestoned walkways and Ghetto communities.

The settings in ‘Act of Faith’ are wonderful and easy to fall into. But the true brilliance of the novel lies in our protagonist, Isabella. She is a wonderful heroine – out of step with her times, she is a whip-quick scholar who has lived her life being encouraged and nurtured in her intellectual pursuits, regardless of her sex. She finds brilliance in the printed word, and is inspired by the idea that people’s thoughts will be immortalized in between the precious pages of books.

Isabella has such a wonderful voice. She is at once very aware of the constrictions around her – terrified by the treatment of her father and running scared at the thought of further retributions against intellectuals. But still Isabella can see that the treatment of scholars and the word of the Church are at odds and causing unfair repercussions against those who love God, but not the limitations of the pope. Isabella is the best sort of heroine to read – she’s fearless regardless of her terror, she speaks though others try to silence her, and she thinks for herself even when others try to cloud her thoughts.

The other brilliance of the novel comes in Gardiner’s meticulous recounts of printing and book production in the 1600’s. We read about this scandalous enterprise – when printing the wrong sort of book would lead to a fiery end. As Isabella becomes fascinated with the process of editing, translating, correction, and typesetting, Gardiner treats readers to some interesting insight into the world of the first bibliophiles. Anyone who loves books and worships at the altar of the printed word will find Gardiner’s explorations fascinating and uplifting – to read about these pioneers of knowledge who fought tooth and nail for freedom of speech, when it wasn’t an absolute right. This is the truly uplifting and inspiring tale of ‘Act of Faith’.


There were maps, finely etched, of a world I'd never seen before. Here was Jerusalem, there London; Amsterdam, a dot at the top of the circle that was the earth. No Heaven on this map – no Hell. Just oceans and lands and cities, as if seen by a bird. Or by God.
I held the whole world in my hands. I held a heresy in my hands.
“Master,” I whispered, “what have you done?”
We should not try to explain the world, that’s what the priests and preachers said, no matter what their doctrine.


I will say that from reading the blurb I thought there would be a romance in the story. Master de Aquila’s printing apprentice, the young man Willem, is mentioned twice in the blurb. I thought this was a hint-hint, nudge-nudge that Gardiner included a little romance for her young heroine. But as I started reading, I did think the novel was full enough without including a love match for Isabella. The settings, conspiracies and printing histories are enough to carry the story and immerse the reader. So I was somewhat pleased to discover that there is no such romance with Willem – the blurb is simply a little misleading (or maybe it was just me that assumed the relationship?). I can see that some readers may be disgruntled by the lack – but for me I was pleasantly pleased to read that Isabella had more important things on her mind than a boy’s affections.

Kelly Gardiner’s new novel is a divine story, dripping in history and delivering a wonderful message of freedom, loyalty and bravery. I loved this novel and will recommend it to bibliophiles both young and old.