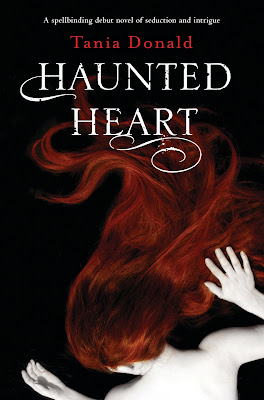 'Intoxicated as I am by my love for him, I am also afraid . . . What wickedness lurks within me, struggling to emerge?'

1838: In a quiet, English village, eighteen-year-old Eloise Morton yearns to experience love. The arrival of a handsome and aristocratic stranger fills her with hope, but their romantic courtship quickly descends into a maze of psychological games and strange, erotic encounters. Eloise finds herself suddenly alone, and transformed in ways that she cannot understand. But what has she become? Are the dark appetites that now compel her human, or otherwise? Is she victim, predator – or both? Eloise sets off on a perilous journey to the other side of the world to reunite with the man who haunts her heart – and to discover the shocking truth about herself.

Sexy, dark and thrilling, Haunted Heart is a breathtaking gothic novel about losing oneself to the heart's darkest desires.

The year is 1838, and Eloise Morton is desperate to fall in love. Her sisters, Georgiana and Miriam are promised to fine gentlemen, but it seems that Eloise is destined to find her heart in books like ‘Pride and Prejudice’ and nothing of real-life romance . . . And then Dolour White arrives.

With his sister Celaine, Mr White moves into the country estate near Eloise’s home and she is instantly smitten. Dolour is intelligent and handsome, wickedly sweet and crushingly beautiful. And, wonder of wonders, Dolour seems to want Eloise as much as she wants him. He visits her in her dreams, and writes fancifully lush letters of wanting. Their love grows, even as nasty rumours swirl about the real reason that Dolour and Celaine left their home in Listerwood. . .

And then Eloise’s dreams of happily-ever-after are dashed. With cruel words and swift finality, Dolour ends their love affair – and takes Eloise’s heart with him, literally.

What’s left of Eloise is a tormented soul. She is at odds with her old self, and this hungry new being that Dolour has left behind. She craves, and she is afraid of herself.

‘Haunted Heart’ tells the genesis of a monster. Through diary-entries and first-hand accounts, we read Eloise’s first meeting of the mysterious and enigmatic Dolour White. We read of her girlish infatuation, and of the erotic dreams that turn her crush into heated yearning . . . as readers, we go on this twisted journey with Eloise as she starts to unravel Celaine and Dolour’s many secrets. The strange voodoo Celaine practices, eerie nightmares featuring Dolour and ominous words of warning as their love ignites and intertwines. Through meticulous diary entries and recounts, we read the awful moment of no return – when Dolour makes Eloise into his own image and she is left with a dueling nature – her human self, and this craving, frightening creature that her lover has left behind;

I had the most curious and frightening dream. I stood once more in the churchyard with Dolour, but we were quite alone, alone amongst the gravestones, in the cold, blue light of evening. Dolour took my left hand in his own and spoke to it, as though he were speaking to me. 'I have a great and terrible gift for you,’ he whispered tenderly to it, ‘but, my love, it will cut you, hurt you to the marrow to put it on. It might even kill you. And once it is on, it will never come off. Will you accept such a wedding ring?’
It seemed that I could neither spear nor move, but that my hand moved of its own volition, clasping his hand, and stroking his face with tender devotion, while I was mute and frozen. A part of me craved such a token from Dolour, but at the same time, I felt very afraid at the strangeness of it all.

Eloise must eventually make the decision; to resist her new, monstrous nature, or follow Dolour into the dark and succumb to his making. Driven by love and curiosity, Eloise chooses her monster-side, and the love of a dangerous man.

There’s certain brilliance in Tania Donald choosing to tell this tale from the perspective of an evolving monster. Because Eloise most certainly is monstrous – they all are; Dolour and Celaine too. Often in YA paranormal books this moment of transference is a glorious one – marked by the protagonists' love for her hero, to the point that she decides to join him in his (insert: vampirism, lycanthropy etc) and live happily ever after. But ‘Haunted Heart’ is traditionally Gothic – and so this moment of choosing which path is in fact a downward spiral into dark and dangerous things. We read Eloise’s altering mind – from the sweet innocent who is charmed by Mr. Darcy while reading ‘Pride and Prejudice’ – to a conniving and tempting creature who starts to see those around her as prey.

And when Eloise and Dolour are reunited in their monster love, it’s like reading a supernatural Bonnie & Clyde – these two predators that have forsaken all others to be together. Their scenes are chilling, both for the sizzling chemistry of their romance, and the price Eloise had to pay to be with her beloved;

He stroked my cheek and twirled a strand of my hair between his fingers. ‘What sport we shall have with all of this.’ He smiled. ‘How very perfect.’
I laughed. ‘I am very glad that you approve.’
‘Approve? Oh, my love! But you are spectacular! What an irresistible lure. What a rare and glorious butterfly has emerged in place of that shy little caterpillar I knew before.’ He put his arms around my waist and looked into m face with great pleasure. He embraced me again and lifted me off my feet in his exuberance.

Now, as to what these creatures are . . . I don’t want to give away the ‘reveal’. Not that the telling will help much – since Donald is drawing on fabled mythology and biblical demons to create an entirely new supernatural – the ‘Couerophage’.

Tania Donald’s tale is dripping in sinister Gothicism. She harks back to the greats (who Eloise is also a fan of) like Mary Shelley and Lord Byron. So it makes sense that ‘Haunted Heart’, like Eloise herself, is a novel of duality – at once dark and menacing, but with a romance that is tamely-erotic for the younger set. The eroticism is not overdone, and in no way gratuitously inappropriate; I would call it erotica-lite – the perfect first foray for young adults who are beginning to outgrow the current crop of PG13 paranormal romances currently offered. I wouldn’t be surprised if young readers of ‘Haunted Heart’ then took the next step towards reading Anne Rice or Stephen King.

I really did enjoy ‘Haunted Heart’, and I’m thrilled to learn that a sequel is in the works. Tania Donald has a Ph.D in English literature, so her writing is justly cunning and flamboyant, a deliciously dark Gothic delight. The novel does drag in some parts, particularly when Eloise and Dolour are separated by sea; but Donald makes up for it by writing a truly heinous YA paranormal romance about a monster and her maker – complete with shady undertones and a befitting Gothic finale.