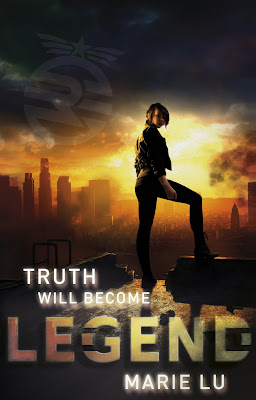 What was once the western United States is now home to the Republic, a nation perpetually at war with its neighbors. Born into an elite family in one of the Republic's wealthiest districts, fifteen-year-old June is a prodigy being groomed for success in the Republic's highest military circles. Born into the slums, fifteen-year-old Day is the country's most wanted criminal. But his motives may not be as malicious as they seem.

From very different worlds, June and Day have no reason to cross paths - until the day June's brother, Metias, is murdered and Day becomes the prime suspect. Caught in the ultimate game of cat and mouse, Day is in a race for his family's survival, while June seeks to avenge Metias's death. But in a shocking turn of events, the two uncover the truth of what has really brought them together, and the sinister lengths their country will go to keep its secrets.

America as we know it is no more; North America is split into two warring factions of East VS. West. The Republic against the Colonies.

The Colonies are a series of slums where soldiers patrol and keep an eye out for plague houses – marking the doomed inhabitants with a final X above their door.

By contrast, the Republic residents are given plague vaccines every year. They live to serve the Elector Primo; their father leader who is determined to beat back the Colony brats and crush their meagre efforts to steal back American land.

Day is a fifteen-year-old boy born in the Colony slums of Los Angeles – he is a wanted criminal and public dissident. His face appears on the Republic jumbo-trons on an hourly basis, but he continues to elude soldiers and enrage officials. He steals from the rich to feed the poor, and has built a slum-reputation for being uncatchable and the biggest thorn in the Republic’s side. In reality, Day is just trying to keep his head down and stay alive for the sake of his family; his brothers and mother who believe him dead, but who benefit the most from Day’s thievery.

By contrast, June is a Republic darling – a child protégé destined for military greatness. She and her brother, Metias, were orphaned when their parents were killed in a car accident years ago. Since then both June and Metias have worked hard to forge ahead in their respective roles – Metias as a Republic soldier, and June as a soldier-in-training at Drake University.

When Day’s youngest brother becomes infected with the plague he decides to risk it all to steal a vaccine from a Republic hospital, with disastrous consequences.

. . . Meanwhile, a tragic event forces June to take responsibility for Day’s vigilantism. She is being moved up the army ranks, and forced to prove herself by bringing Day to justice, whatever it takes;

I will hunt you down. I will scour the streets of Los Angeles for you. Search every street in the Republic if I have to. I will trick you and deceive you, lie, cheat and steal to find you, tempt you out of your hiding place, and chase you until you have nowhere else to run. I make you this promise: your life is mine.

‘Legend’ is the first book in a new YA dystopian trilogy by Marie Lu.

Before this book even hit the shelves, it was destined for great things. Lu’s trilogy has already been optioned for film rights by CBS Films, and is even being produced by dream-team Marty Bowen and Wyck Godfrey who bought the ‘Twilight’ saga to the big screen. When a book has that much fan-fare surrounding it even before its release date, there’s a small concern that maybe the hype is hollow and won’t meet such lofty expectations . . . Thankfully, ‘Legend’ has been rightfully anticipated as the dystopian du jour.

Lu’s alternate universe is incredible. Most dystopian novels are based in desolate lands – depleted by war or extreme global warming. But Lu’s world is more influenced by the impact of politics – in this alternate North America where things have taken a decidedly tyrannical turn. The Elector Primo has been in office for seven consecutive terms, and the Republic army help him rule with an iron fist. America has also been segregated by social status – the wealth of the Republic and the impoverished Colonies. This is an apartheid of prosperity – even the health care system is rigged by wealth, ensuring that the rich remain vaccinated and healthy, while the poor are left to die in their plague-ridden neighbourhoods.

This alternate America is vividly communicated by the alternating points of view of Day and June. From Day we learn of the plague-ridden Lake District; where an X above one’s door is as good as a death sentence. Nobody has money for plague vaccines, and everyone works dangerous jobs for pittance pay. Day watches from the shadows as soldiers beat on ‘slum brats’ and his own family are left to the mercy of the plague. Though only fifteen, Day is a wonderfully courageous character. He is like a dystopian Robin Hood; a veritable Che Guevera for the fictionalized slum set. The best thing about Day though, is that he thinks for himself. He’s very observant and highly intelligent – he refuses to have the Republic’s jumbo-tron messages shoved down his throat . . . everything that he has become, this slum vigilante and crusader for the Colonies, he has got there by making up his own mind about the world around him.

Meanwhile, June is feeling constricted by her University education. She is desperate to join her brother on the front lines and put her learning to good use . . . and the ultimate prize for her is the wanted Day – the man every soldier wants to catch and every Republic official wants to gag.

But then a terrible event throws June and Day together as disguised enemies, soon to be comrades-in-arms with a torrential romance binding them.

I loved Lu’s ‘Legend’. It’s evident from the get-go that this is a universe of intricate building and infinite back-story. Lu has a game-plan in mind with this trilogy, and she is certainly setting the scene on a grand scale in this first book. June and Day are set-up as our opposing protagonists who offer very different viewpoints. At the same time, we meet the people in politics as June’s success grabs the attention of those at the top, as does Day’s continued subterfuge. And there are a few gut-clenching plot-twists that will keep you guessing and sweating throughout this page-turner.

The real brilliance of ‘Legend’ lies is in the alternate points-of-view offered by Day and June. I’m not often a fan of multiple-narratives, but seeing this new world order through the eyes of the ‘have's’ and the ‘have not's’ makes for fascinating, immersive reading. It means that no character is written in black and white – we see the merit of both worlds, the clever trickery that stops our protagonists seeing what’s right in front of them and Lu’s characterization gray-scale. And it’s doubly wonderful when Day and June do (finally!) cross paths, and we read the ramifications of their affiliation . . .

This is a hard-hitting dystopian book. Lu doesn’t pull any punches in her story, and she rarely holds back. Day and June have both been forced to grow up under duress – June as a weapon-in-training for her country, and Day as a vigilante on-the-run. As a result, both young protagonists are disturbingly hardened by their world – they are violent and single-minded, to a fault. The one chink in their respective armors is their family – Day’s mother and brothers, and June’s older brother. I loved reading a book that at once put so much emphasis on family and loyalty, while also ensuring that the young characters were wizened and toughened.

Marie Lu’s ‘Legend’ has it all – tragedy, romance, political intrigue, action, high-stakes and two unnervingly mature and complex protagonists to take us on this twisted journey. 'Legend' should be appearing on everyone's 'must-read' list, without a doubt! Lu is setting the stage for a grand dystopian tale, and I for one cannot wait to see where she takes us next.