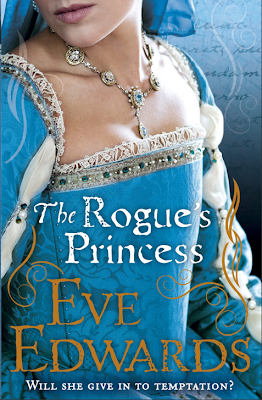 Sixteen-year-old Mercy Hart is the daughter of one of London's richest – and strictest – cloth merchants.

Kit Turner is an actor and the illegitimate son of the late Earl of Dorset. A chance encounter finds Kit falling for the beautiful Mercy's charms, but their love is forbidden. A cloth merchant's daughter and a vagabond player – it simply cannot be.

If Mercy chooses Kit she must renounce her family name and leave her home. Will she favour duty over true love, or will she give Kit his heart's desire?

Christopher ‘Kit’ Turner is the illegitimate Lacey brother. For years he thought himself a cast-off of their father’s ill-favour; the forgotten son and family secret. Kit was forced to find his place elsewhere in the world, and so he sought solace and fame on the stage. Years later he is a London favourite – a marvel for the ladies and money-maker for his kind manager.

But recent events have conspired to reunite Kit with his three brothers – Will, James and Tobias. While he shares an uneasy alliance with the two elder Lacey’s, Kit has a tender-hearted spot for his look-alike youngest brother, Tobias. So when the little shrimp comes calling on Kit’s London apartment, eager to stay with his delightful brother and avoid certain debt collectors, Kit is bemusedly happy to have him. But when Tobias falls in with a crowd of Scottish queen sympathizers, Kit finds it necessary to intervene before treason catches Tobias by surprise.

Meanwhile, Kit’s cynical heart is filled with hope upon meeting the lovely Mercy Hart. At a dinner to raise funds for the theatre, Kit finds himself instantly smitten with the pious and humble Mercy – with her dimpled smile and belying fiery curls. Though her father disproves the match, most vehemently, both Kit and Mercy are determined to have each other . . . even when murder, treason and plot look set to rip them apart, forever.

I have been a big admirer of this series since ‘The Other Countess’ first came out last year. Eve Edwards has written such incredibly immersive and unique young adult books – set in the Elizabethan period and covering all manner of historical topics from religious persecution to politics in the Virgin Queen’s court. ‘The Rogue’s Princess’ is another sublime historic romance – this time observing the life of an illegitimate nobleman’s son and set in the grimy, gossiping London town.

Kit was first introduced in ‘The Queen’s Lady’ – a surprise appearance for the Lacey boys who never knew they had a fourth brother. We learnt a little about Kit’s unfortunate illegitimate status in that book, but Edwards goes into more detail in ‘Rogue’s’. We learn of the few choices set before Kit when his father died and funds for his schooling dried up. Through happenstance and a kind manager (not to mention the flights of fancy for little boys) Kit carved himself a nice life on the stage. First he was a youthful boy-girl for the romances, at a time when women were banned from setting foot on the stage for reasons of impropriety. Years later and Kit is a leading-man, nabbing all the best hero roles and making the London ladies swoon.

But despite Kit’s fandom, the theatre is still considered an unrespectable trade. The stage has also become the newest whipping-post for preachers and church-goers, claiming that it degrades humanity and shows people in the worst light imaginable. The politics of theatre in the 1500’s is fascinating – especially since a certain William Shakespeare is just starting out in Kit’s theatre troupe, and nobody is even sure if he can write a decent play. Edwards does a brilliant job of showing this side of life in Elizabethan times. In previous books Edwards has shown us the way of life for a country nobleman and the intricate inner-workings of the Queen’s circle. It was nice to get out onto the London streets in ‘Rogue’s’ and get a feel for the town – especially from the point of view of someone who has his foot in so many worlds. Kit has noble blood, but is illegitimate. He is invited into the very noblest of houses for entertainment purposes, but his profession labels him something close to a degenerate. 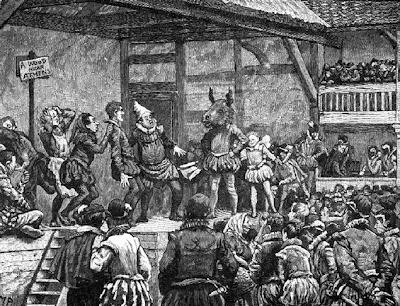 On the other end of the spectrum is Mercy Hart, a wealthy merchant’s daughter and pious church-goer. Mercy made a deal with God many years ago to remain righteous and humble – and she has taken her promise to the very edge. Wearing drab clothes, avoiding the theatre and even ignoring her musical talents. But underneath it all, Mercy is suffocating and dying for some light in her life;

Mercy smoothed her grey skirts, secretly agreeing that they were dreadful, but she had made a bargain with God when she was little and she meant to keep it. “I like being this way.”
Ann turned away to gather a few things for Mercy, putting them in a little leather bag. “No, you don’t. I see you eyeing my orange kirtle. You, Mercy Hart, are a counterfeit good girl. There is a merry maid just waiting to burst out.”

When Kit and Mercy meet at a benefactor’s dinner party, it’s love at first sight. Kit is amazed at Mercy’s sweet disposition and innocent nature, so different from the fans who come courting him. And in Kit, Mercy has found an outlet for her soul – someone with whom she can play and enjoy life. 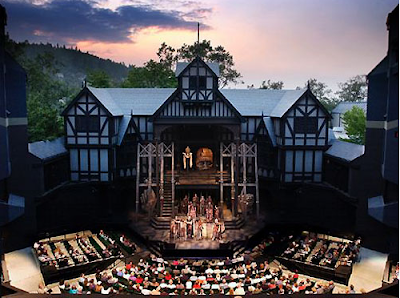 But Kit and Mercy have her father to contend with – a man of strict virtue and unbending morals. He thinks the stage is for degenerates and whoresons, and would see Mercy barefoot and nameless before agreeing to a match with Kit Turner. Still, despite her family's condemnation – Mercy and Kit have a luscious and intense romance;

Bending down, he plucked three strands of grass and wove them into a ring. “Here. I cannot afford gold – yet,” he winked, “but wear this for me.” He bit off the ragged ends and pushed the grass ring on to her finger. “Mercy, I do not know any words for this. Perhaps I should have consulted the poets and learnt my part, but too late. You are left with the plain man speaking plain words, a worthless rogue daring to address a merchant princess. Will you marry me? Will you be mine?”
She covered her left hand with her right, caressing the ring he had made for her. “It is better than gold to me.”

I love Eve Edwards’s ‘Tudor Historical Romance’. Her books are rich in history, full of romance and dashing/daring characters to captivate the heart. ‘The Rogue’s Princess’ is another jewel in Edwards’s marvellous series, but I sincerely hope it’s not the last. I have my fingers-crossed that Edwards gives us a book for youngest Lacey, Tobias. I adore these books and heartily recommend them to lovers of history and romance alike! 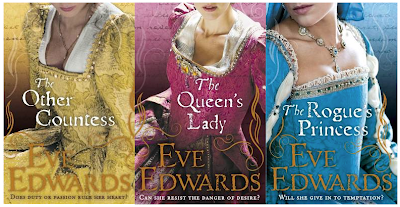