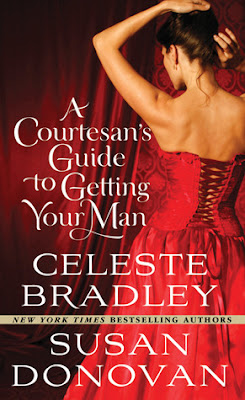 Regency London’s most celebrated courtesan, The Blackbird, was a woman before her time—uninhibited, financially independent, and free to live by her own rules. Schooled in the sensual arts by the one man she loved the most, she recorded every wicked detail in her diaries…

When Boston museum curator Piper Chase-Pierpont unearths The Blackbird’s steamy memoirs, she’s aroused and challenged by what she finds. Could the courtesan’s diaries be used as a modern girl’s guide to finding love and empowerment? One curious curator—and one very lucky man—are about to find out…

In present-day Boston museum curator Piper Chase-Pierpont has made the discovery of her career. While organizing an exhibit for the life and times of infamous and beloved Boston abolitionist Ophelia Harrington, Piper stumbles across a hidden diary. . . written in the flourished hand of Ophelia herself, the diary is an extraordinary insight into the young activist’s very private life – her life before politics and family, when she was London’s notorious ‘Blackbird’ – a highly sought-after courtesan, once accused of murder.

For Piper, this museum exhibit is a last-ditch effort to keep her job. With the country in recession and last season’s disastrous exhibit still hanging over her head, the last thing Piper needs is a contentious diary labelling one of Boston’s most beloved historic figures as a scarlet woman. And then Mick Malloy swaggers into town . . . Mick, her old university teacher and first (and last) lustful crush. Until the night that Mick shattered Piper’s confidence – the repercussions of that ego-damaging turn-down carrying into Piper’s thirty-year-old spinsterhood still. Mick is now a big-wig archaeological superstar, in town to help the family business and organize a reality TV show.

Her job hanging on the line and her first love making a reappearance – Piper turns to Ophelia’s sumptuous diary entries for guidance. And as Piper decides to take hold of her life and reinvent herself, she reads Ophelia doing the same from 1813 as she learns the art of seduction under the tutelage of a masked-man known only as ‘Sir’ – a man who will hold Ophelia’s heart (and Piper’s fascination) for twelve long years.

‘A Courtesan’s Guide to Getting Your Man’ is the contemporary/historical romance combo from authors Celeste Bradley and Susan Donovan.

I have been dying to read this book ever since it came out in May. I read a fantastic review from reputable bookish source, Julie of ‘Outlandish Dreaming’ . . . not to mention Susan Donovan piquing my interest last year when I read her (incredible) contemporary romance ‘He Loves Lucy’. I was also curious of a romance written by two authors covering two romantic sub-genres – Donovan writing the contemporary, and Bradley the historical. So even before I cracked this book open I had an inkling this book was something special – and I was right.

I thought I was a pretty old-hat romantic reader at this point – but Donovan and Bradley have delivered an entirely new romantic enterprise with ‘Courtesan’s Guide’. I love contemporary romances, and I adore historical romances – but never have I read a book that combines the two so splendidly and seamlessly. The beginning of the book is told from present-day Boston, with Piper reading excerpts from Ophelia’s discovered diary. Piper’s spinster-predicament is covered, and her re-romance with Mick quickly established . . . and then as she becomes consumed with winning Mick over and taking her life by the horns, Celeste Bradley takes over the reins and the narrative switches to Ophelia back in 1813 as she begins her courtesan-quest. From there on in the two women’s tales are told simultaneously and alternating – their romances running concurrently.

Ophelia’s world is turned upside-down when her uncle and aunt auction her hand in marriage. Disgusted by the prospect of being bought and bartered, Ophelia seeks out one of the most infamous and exalted ladies of London – the Swan. She is a courtesan extraordinaire – coveted and carefree, gorgeous and graceful. Ophelia throws herself on the Swan’s mercy and tutelage, relieved when the lady agrees to help Ophelia and find her a protector. Thus, she is introduced to ‘Sir’ – the mysterious masked man who is her instructor in the carnal arts. For one week Sir teaches Ophelia all she will need to know about pleasing men and enamouring herself to society. The two share a luscious and precious bond – and though Ophelia spends the next few years as a highly sought-after courtesan, luxuriating in the finest men’s beds, she never forgets the man who taught her everything she knows . . . about love, lust and longing.

Meanwhile, in present-day Boston, homey and plain Piper is mortified when her ages-old crush waltzes into town. She has been hung-up on him since grad school, and while Mick has been off cavorting around the world she has been stuck under-paid, under-appreciated and under-sexed – pining for a man who never wanted her to begin with. But that’s all going to change thanks to Ophelia’s words of wicked wisdom.

I loved both Ophelia and Piper – two very different women with delicious stories to tell. Admittedly, Piper and Ophelia’s respective stories could have been books unto themselves . . . but things are so much more interesting and better balanced with Bradley and Donovan sharing the pen.

If we’d just had Ophelia’s story I’m not sure I would have been terribly patient with her boudoir-shenanigans and bed-hopping. The small slice of her life that we read is fiercely independent and forward-thinking – she was a woman who didn’t want to be tied down to a man, let alone bargained into marrying one. She saw a loophole in society – where men’s mistresses are free to live alone, make their own money and choose their partners – but who are still beloved by London society for their titillating behaviour and trend-setting. As it is, with the book split between two worlds, we only ever read about Ophelia’s explicit time with Sir – and her other paramours are brushed over and easily summarised.

I was a woman free to be extraordinarily unwise.
What a delightful notion.

Likewise, Piper’s story could have been fairly ho-hum – the story of a plain jane turned makeover miracle isn’t exactly original, and the tale would have been over in a matter of chapters. So, while both Ophelia and Piper’s stories could have carried their own book – each is strengthened by linking to the other in ‘Courtesan’s Guide’.

Both stories, combined, are titillatingly delicious. Piper and Mick’s romance is sweetly sensual, while Ophelia and Sir have a scorching romance. Both love stories are equally fervent and beautifully tender – we wonder if Piper and Mick will let work get in the way of their newfound love, while Sir and Ophelia battle each other’s wills and then the court of law.

And at the centre of the plot is Piper’s determination to tell Ophelia’s true X-rated story. Ophelia’s tale tells of the London marriage-mart and the few options for women of the times . . . her history also lends evidence to her future abolition activism, and Piper believes it is a tale worth telling (no matter how raunchy!).

“I’m going to lose my job, you know. Probably right there on the spot.” Her words were flat. “And there won’t be a lot of choices for me afterward. The museum world isn’t exactly clamouring for over-budget, renegade feminist curators these days.”
Mick slipped an arm around her shoulders. “But the world is always in need of women brave enough to fight the establishment.”
She looked up at him sideways, a small smile touching her lips.

I knew I would love Celeste Bradley and Susan Donovan’s ‘A Courtesan’s Guide to Getting Your Man’ – but I couldn’t predict how much. I absolutely, thoroughly and unabashedly adored this book, and it’s going on the 2011 favourite’s list for sure! I intend to read more books by both authors, and keep my fingers firmly crossed that they decide to write another romance-duet.