'Spell Bound' Women of the Otherworld #12 by Kelley Armstrong 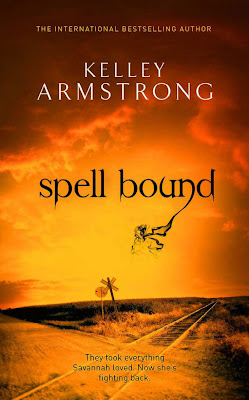 Savannah Levine is in danger. That's not usually a problem. But, caught in the grip of a disturbing and violent murder case, Savannah swore to give up her unique gifts if it would save an innocent young girl. Little did she know that someone - or something - was listening... Now she has no idea how to restore her powers, just when she needs them the most.

In this compelling, fast-paced new thriller, Savannah has to face a host of deadly enemies bent on destroying not only her, but the very fabric of the supernatural world. As dark forces gather, Savannah isn't just fighting for her life, but for everything and everyone she loves...

Savannah Levine has always defined herself by her genetic reputation (Cabal father, dark witch mother) and her lethal magical ability. That’s who she is – it’s why she was kidnapped as a child, and why she had to be raised by the witch, Paige Winterbourne and her Cabal-connected husband, Lucas Cortez. It’s why Savannah is such an intricate part to their supernatural PI business, and how she found a place for herself in the larger paranormal community.

So what happens when the very thing that defines Savannah is taken away?

‘Spell Bound’ is the twelfth book in Kelley Armstrong’s superb supernatural saga, ‘Women of the Otherworld’.

When we left Savannah in her narrative debut, ‘Waking the Witch’, she was feeling forlorn and guilt-ridden in the little town of Columbus. Having just helped to convict a grandmother and ensure her granddaughter would run the foster care merry-go-round, Savannah made an impulsive and remorseful wish – that she would sacrifice her magical powers to help this family.

The wish came true, and now Savannah is a witch without powers.

And just as Savannah has wished herself defenceless and rudderless, the supernatural world is beginning to stir, with murmurs of discontent threatening the peace and privacy of the paranormal community.

A group called ‘The Supernatural Liberation Movement’ is an underground network of revolting supernatural’s with one disastrous motive – to reveal themselves to the human world. They want to rise up and claim their rightful, Darwinian-appointed place at the top of the food chain. Sick and tired of lurking in the shadows, they are calling on all witches, vampires, werewolves, necromancers and any other paranormal being to come forth and step into the light.

Curious though, that right when Savannah loses all her powers, these paranormal crusaders want to come forth and wave their freak flag?

In ‘Spell Bound’ Kelley Armstrong flips the entire ‘Otherworld’ story on its head and offers up a very interesting plot. The powers of the ‘Otherworld’ characters have, in the past, been a burden, blessing, and desire. . . but always they have been a given. Apart from some poisonous side-effects or dampening spells, readers have always been calm in the knowledge that Clay can defeat the bad guys with his werewolf strength and Paige can call on a spell to get out of a bind. So, for Armstrong to strip Savannah of her powers is both unheard of and a wonderfully complex game-changer.

Simply by making Savannah ‘normal’, Armstrong changes her entire persona. Savannah has always walked a fine line between apathetic and certifiable. She doesn’t bat an eyelash at gruesome decapitations, and she only feels protective and sympathetic to those people she knows and cares about. Otherwise, Savannah is a fairly dry-eyed character; having lived a tough childhood full of death, captivity and guilt. As a result she has a tough outer shell and little remorse or compassion to spare for strangers.

When her powers are taken away Savannah becomes emotional. She queries her self-worth and loses her hardened edge; she becomes a completely different person with the loss, and is far more interesting for it;

I took a step away.
“Don’t, Savannah,” he said softly. “Please don’t run.”
“What am I going to do?” I whispered. “Without my powers, I’m –”
“Exactly the same person you are with them. Just a whole lot less dangerous.”
He was trying to make me smile. Instead, fresh tears filled my eyes.
I was Savannah Levine, ultrapowerful spellcaster. Daughter of a Cabal sorcerer and a dark witch. Without my powers, I'd be a human PI working for an agency specializing in supernatural cases. As useful as an ashtray on a motorcycle.

Savannah has always been one of those prickly characters who readers will either love, or hate. She’s cocky and beautiful, certain of her powers and impeccable magical breeding. She has, in the past, come across as bratty and self-important. So to read such a complete character flip is both disarming and refreshing.

Savannah’s change in personality also seems to bring her private feelings to the fore . . . regarding her adopted parents, Lucas and Paige, but particularly where her best friend, Adam Vasic, is concerned. Savannah has been in love with Adam since she was 12 and he helped rescue her from a supernatural detainment facility. Regardless of their age-difference (he is 33 to her 21); Savannah has loved Adam with a private but unwavering devotion for most of her life. Adam, of course, is none-the-wiser and seemingly content in his big brother/best friend role. But when Savannah starts questioning her life as a mere human, she also starts thinking on her own mortality (so much more precious now that she can’t defend herself with magic) and what it would mean to never tell Adam how she feels about him.

Readers of ‘Waking the Witch’ will be familiar with Armstrong’s meandering pace where Adam and Savannah are concerned . . . well, expect much of the same (with some heated promises) in ‘Spell Bound’. Again, Savannah and Adam cannot be rushed. Their friendship has been meticulously built over the previous eleven books, so to bring it all crashing down with a big romantic reveal would feel cheap and convenient. I’m glad Armstrong is easing readers into this romance, and I look forward to more slow-burning chemistry.

‘Spell Bound’ is an all-stars ‘Otherworld’ instalment. Everyone comes out for the wind-up to book thirteen’s grand finale. Jeremy, Jamie, Hope, Paige, Lucas, Elena, Clay, Karl, Cassandra, Aaron. . . you name them, and they’re in here. The whole cast come out for the ‘Spell Bound’ book because the central mystery is B-I-G. It affects the entire, fragile Otherworld universe and has its roots reaching back to the beginning of the series. To give anything away about this central, mystery plot would be an absolute crime because Armstrong has plotted it beautifully and intricately.

Kelley Armstong is not contracted beyond book thirteen (again, to be narrated by Savannah, and slated for a 2012 release). Whether she continues the series beyond #13 is unknown. . . but what readers do know is that the Otherworld is rumbling. Armstrong is winding up for an epic ending that pulls all of our beloved characters together and throws them into a free-for-all finale. I can’t wait! 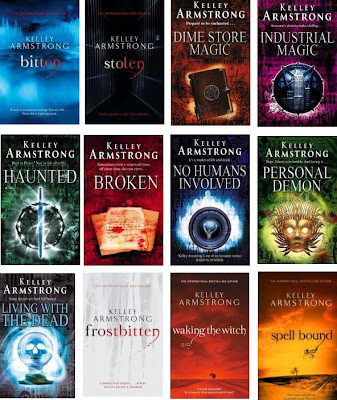