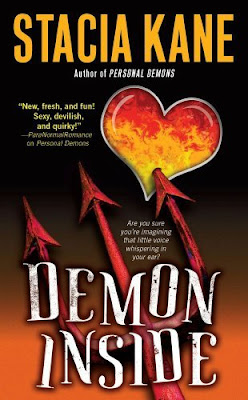 Hanging out with demons can be hell....
It's been three months since psychologist Megan Chase made the stunning discovery that the world is filled with demons, and once more the situation is too hot to handle. Ironically, Megan -- the only person in the world without a little personal demon sitting on her shoulder -- has become the leader of a demon "family," but now some unknown arcane power is offing her demons in a particularly unpleasant fashion. And while her demon lover Greyson Dante is still driving her wild with desire, he's also acting strangely evasive.

Then there's the truth about Megan's past -- the truth she's never known. Caught between personal problems and personal demons, Megan is having one hell of a hard time. Will the help of her Cockney guard demons and her witch friend Tera be enough so that Megan can finally resolve the past, survive the present, and face the future?

Megan is experiencing some leadership problems. She has taken over a crew of ‘personal demons’ – the little lizard-like cretins who invisibly sit on people’s shoulders and encourage them to do bad things. But since becoming their ‘queen’ she has met with open hostility – her demons are unhappy with her managerial techniques, and disgruntled by her preoccupation with humanity . . . and Megan’s kinda-boyfriend, Greyson Dante, is just as unhappy with her stubborn human streak.

Meanwhile, Megan has received some disturbing news. Her estranged father has passed away and her cold-hearted mother is ordering Megan’s appearance for the reading of the will. Turns out, daddy dearest has left Megan a nice little surprise from the after life – the deed to the mental hospital where Megan spent her formative years.

In this second installment to Stacia Kane’s ‘Megan Chase’ urban fantasy series, our female heroine learns the truth about her past, and the demon inside her.

I love Stacia Kane, and I’m thoroughly enjoying her ‘Megan Chase’ series. This second book is a wonderful delve into Megan’s character. We really get an all-encompassing examination of her childhood and home life; and it’s disturbingly Freudian. No wonder Megan went on to become a psychiatrist. This is also a nice little riff on ‘personal demons’ – both literal and mental as Megan explores the myriad of ways she has suppressed her own childhood anguish.

While ‘Demon Inside’ is a wonderful Megan exposè, it’s not such a great book for romantic development. Since their fiery coupling in ‘Personal Demons’, this second installment sees Megan and Greyson Dante co-habiting in a strangely undefined romantic liaison. Their romance is hampered by the need to keep up appearances in the ever vigil and circumspect demon world – but Megan is also careful not to put labels or boundaries on their ‘relationship’ because she gets the feeling that Greyson isn’t permanent. She is well aware of his Lothario reputation and thinks that means they are a casual fling – for all Megan knows, she is just one of many ladies on Greyson’s current dance card.

But Megan’s blasé attitude is at odds with her outward affection for Greyson, and vice versa. They do share some very steamy and intimate scenes;

She put her hand on his arm, drawing his gaze. “This is a big deal for you, isn’t it? Not just for the prestige, but for you.”
He stopped smiling when his eyes met hers. The rest of the room seemed to fade away. “It’s what I've worked for all my life.”
Even with her heels on, she had to stand on tiptoe to kiss him. Just a quick press of her lips, nothing inappropriate for the sombre occasion, but enough to send tingles all the way down her spine. It was like kissing a live wire.
“Congratulations.”

And yet, Megan remains determined to keep up the pretence of ‘easy, breezy, casual girlfriend’. Considering she’s a psychiatrist, it seemed like a very obvious oversight for Megan to deliberately avoid talking about her romantic feelings towards Greyson. I mean, I can understand her repressing childhood memories – but being stubbornly tight-lipped about her romance status was too much of an elephant in the room. Mind you, I did appreciate the fact that Megan is just human – demon inside aside, and her psychiatrist title; it was sort of nice of Kane to show that even someone who deals with everyone else’s problems can’t quite grasp her own.

But for that reason ‘Demon Inside’ felt like it had a hole in it. Greyson takes up so much of the book that the lack of romantic context for him and Megan started to feel uncomfortable. Still, I’m enjoying this helter-skelter urban fantasy and am excited to be approaching the finale. Bring it on! 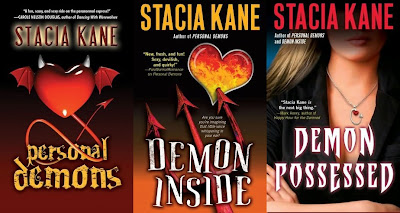