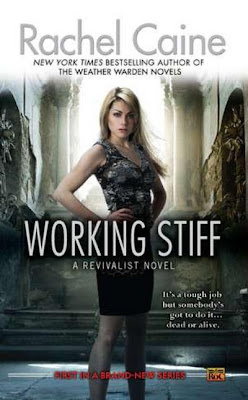 It's a tough job but somebody's got to do it – dead or alive.
Bryn Davis knows working at Fairview Mortuary isn't the most glamorous career choice, but at least it offers stable employment – until she discovers her bosses using a drug that resurrects the clientele . . . as part of an extortion racket. Now Bryn faces being terminated (literally) with extreme prejudice.

With the assistance of corporate double agent Patrick McCallister, Bryn has a chance to take down the bigger problem – pharmaceutical company Pharmadene, which treats death as the ultimate corporate loyalty program. She'd better do it fast before she becomes a zombie slave – a real working stiff.

Bryn Davis is ex-military, just trying to fit into her new civilian job . . . at a funeral home. Not exactly a ‘normal’ job, offering people casket packages and floral arrangements, but a job nonetheless.

Except Bryn thinks there’s something strange(‘r’ than you’d expect) happening at Fairview Mortuary. Desperate people come to this place after hours, and the funeral director seems to be selling more than just bereavement packages. And as it turns out, Bryn is right. Because Fairview is selling immorality and reanimation – for a hefty price.

Bryn soon finds herself in the middle of a corporate upsurge with a company called Pharmadene – more than that though, she has become their own personal lab rat. Complete with handler, Patrick McCallister and a do-or-die mission.

I love Rachel Caine. Honestly, between ‘Morganville Vampires’ and ‘Weather Warden’ she has fast become an automatic-buy for me and a guaranteed book-pleaser. So her new series was heavily anticipated . . . and, of course, it totally lived up to expectation.

In ‘Revivalist’, Rachel Caine is exploring the current hot-topic of zombies. But in typical Caine fashion she is setting herself apart from all other zombie paranormal’s that have gone before her. Because in ‘Revivalist’ zombies are a by-product of clever business marketing –tied up in big Pharma and corporate espionage.

“From the moment our researchers discovered that this drug could revive and maintain dead tissues, there was no going back. It isn’t about a market share; it’s about power. Someone’s going to have it. Someone will control how this drug is manufactured and used. It will change the entire world. Wars will be fought. Whole civilizations will be destroyed, because right here, in these rooms, we have stopped the one thing that man never conquered: death.”
There was a glow in her face now, an almost religious ecstasy that Bryn found scarier than the corporate bullshit she’d seen before.

I was reading ‘Working Stiff’ while also viewing the new season of ‘Torchwood’, and their new ‘Miracle Day’ storyline. Caine and Torchwood are exploring similar ideas very differently – and I found that my reading/viewing was a nice, harmonious complement. With Caine, we observe the grass-roots of a corporate pharmaceutical takeover. In ‘Torchwood’, we are watching the global fall-out if such a pharma problem was allowed to thrive. And at the root of both concepts – what if we couldn’t die? I love it. I love that both Caine and Torchwood have taken the fairly blasé concept of ‘zombies’ and ‘immortality’ and put a clever and real-world spin on it.

One of the best things about all of Caine’s series is her tendency to put her main (female) characters into tough predicaments early on. In the first ‘Weather Warden’, Jo is an accused murderer on the run with a demon mark on her person. In ‘Morganville’, Claire is quickly under ownership by the biggest, baddest town vampires and left to serve them. Likewise, in ‘Working Stiff’, Bryn is quickly thrown into a bad situation that sees her become a Pharmadene puppet, and almost completely reliant on them. It’s such an interesting dynamic for our heroine to be in – literally ‘owned’ by someone else. And everything that comes after is the repercussions of her being between a rock and a hard place.

Caine also excels at writing swoon-worthy romance – Jo and David, Claire and Shane. Well, in ‘Working Stiff’ we have a slower-to-burn romance between Bryn and her handler, McCallister. It’s one of those romances where you’re really not sure if what you’re reading is a romance-in-the-making or just a little side-tracking . . . Caine definitely keeps these two subdued, and readers on their toes when it comes to their true feelings. It’s a different paced coupling than what we’ve read from Caine in the past (none of Jo and David’s instant-steaminess, or Claire’s constant pining for Shane) but it still works. Just a little more subtly.

I will definitely be reading more of Rachel Caine’s ‘Revivalist’ series. ‘Working Stiff’ is a smart zombie novel that goes beyond the typical reanimation explorations and delves into the world of big Pharma and corporate takeover. In typical Caine fashion, our heroine is gutsy, loyal and in the wrong place at the wrong time . . . this series is shaping up to be a very rewarding and interesting new addition to the urban fantasy genre, even if the romance was less ‘fireworks’ and more ‘slow burn’.