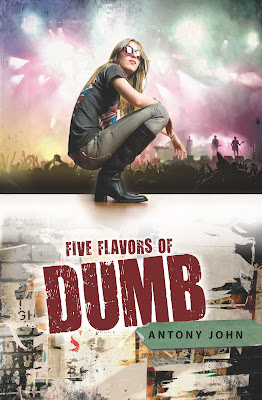 The Challenge: Piper has one month to get the rock band Dumb a paying gig.

The Deal: If she does it, Piper will become the band's manager and get her share of the profits.

The Catch: How can Piper possibly manage one egomaniacal pretty boy, one talentless piece of eye candy, one crush, one silent rocker, and one angry girl? And how can she do it when she's deaf?

Piper can't hear Dumb's music, but with growing self-confidence, a budding romance, and a new understanding of the decision her family made to buy a cochlear implant for her deaf baby sister, she discovers her own inner rock star and what it truly means to be a flavor of Dumb.

Dumb is the hottest band to ever grace the front steps of Piper’s public Seattle high school. They’re frantic and hyped, with hot-boy Josh in lead vocals, his stoner brother Will on bass guitar and green-haired violent femme, Tash, on lead guitar. They have just won the Battle of the Bands, and scored a recording session with a tax-evading ex-rocker. Dumb are so hot, they blow up the speakers, literally, and have their classmates enthralled. Even Piper Vaughan is intrigued by their energy . . . which is odd, because Piper can’t hear them.

Piper started losing her hearing at six-years-old, which wasn’t all that surprising since her grandparents were both deaf. Now Piper is eighteen-years-old and classified as moderately-severe deaf; she can sign, has an out-dated hearing aid and lip-reads. She doesn’t think of herself as ‘disabled’ or lacking. But her parents clearly do, which is why they dipped into Piper’s college fund to give her baby sister Grace, a cochlear implant. Piper would tell her mum and dad how much that hurt – to have her baby sister cured of the life that Piper is living. . . but her dad never learned to sign and her mum is too busy being amazed at the miracle of Grace’s hearing. Piper can’t even share her commiserations with her younger brother, Finn, because he gets embarrassed signing to Piper in public.

So when Dumb explode on the school steps, Piper is uncharacteristically fascinated. She has been a non-entity at her high school, ever since their hearing-impaired program was budget-cut. Nobody knows how to treat the deaf girl, so they just ignore her. Until Dumb. Until Piper tells Dumb everything they’re doing wrong . . . and offers to be their new manager.

Now Piper has a purpose, and even if she doesn’t understand Dumb’s musical motivations . . . she’s going to take them into Seattle music history.

‘Five Flavors of Dumb’ is the award-winning YA novel from Antony John.

I first became interested in this novel because of ABC show ‘Switched at Birth’. That show is all about two girls who were, as the title suggests, switched at birth. They are reunited with their biological parents when the hospital’s mistake is discovered, but by that time the girls are sixteen and firmly entrenched in their respective lives. One of the girls is deaf, and finds it hard to adjust to her hearing biological family. This was the most interesting aspect of the show for me, as we see how this deaf girl tries to assimilate to life with a hearing family who have no clue how to cope with deaf culture. Ever since discovering this TV show; I have been thinking that I'd love to read a book with a deaf protagonist . . . lo and behold, ‘Five Flavors of Dumb’.

Antony John studied music at Oxford, and his biography mentions a lagging rocker career. He got the idea for ‘Five Flavors’ from his wife, who suggested he write a book about music, from the perspective of a deaf girl. Music does play a crucial part in the book, even down to the iconic Seattle setting – a city that has created two of music’s most beloved artists, Kurt Cobain and Jimi Hendrix. For Piper, music is a language she can never grasp; it’s an impossible mathematical equation and another hearing divide. She doesn’t know any past or current musical bands, and for her music is just vibrations and white-noise. Music is just another chasm between Piper and the rest of the world . . . until Dumb come along.

Now, Piper is learning the intricacies of music – more importantly, she’s realizing that it’s less about sound, and more about soul. She doesn’t need to hear Jimi Hendrix’s Star-Spangled Banner to know it’s a scream on his guitar. Piper doesn’t need to listen to ‘Smells Like Teen Spirit’ to understand that Kurt Cobain was singing for a disenfranchised generation. She learns these things from visiting Hendrix’s shack of a childhood home, or seeing the house where Cobain took his own life. Throughout the book Piper is learning that there’s more to music than just notes, rhythm and timing . . .

I loved this book. But as much as music is a central focus and metaphor, there are bigger plots concerning Piper’s loneliness at school and her strangled family life. And these explorations are what makes the book truly brilliant.

There’s tension in the Vaughan household when baby Grace is ‘cured’ of her deafness, leaving Piper to feel like the rejected daughter. At school nobody knows how to treat the deaf girl, and even when Piper joins Dumb she feels ostracized and on display;

. . . I noticed Josh standing in front of me, stamping the ground as if he were trying to put a hole in it. I peered over the top of the computer and realized all eyes were on me.
“Ed said that stamping my foot is a socially acceptable way of getting a deaf person’s attention,” explained Josh, confused that it took me so long to notice.
At the back of the room, Ed rolled his eyes. “But not during a band rehearsal, remember? I told you, there are too many other vibrations. Just wave your hand somewhere that Piper can see.”
Okay, I admit it – it kind of sucked to have all this explained in front of me, like it was part of a lesson on the care and feeding of the deaf girl. It especially sucked to have it play out in front of Kallie Sims, like we were a study in opposites, textbook definitions of “cool” and “uncool” with real live representations of each (for illustrative purposes only!).

As I suspected, it was very interesting to read from the point of view of a deaf protagonist. There’s a myriad of ways that Piper is made to feel different thanks to other people, even when she doesn’t necessarily feel ‘odd’ herself. The one person who doesn’t make Piper feel ashamed or embarrassed by her deafness is Ed Chen, her chess mate and classical music prodigy. Ed and Piper are very, very sweet – illustrating that in some things Piper is more blind than deaf.

‘Five Flavors of Dumb’ was a fantastic and heartfelt young adult novel. Piper was a wonderful and strong leading lady, despite those around her (even her family) convincing themselves that she was somehow lacking because of her deafness. As Piper discovers the true intricacies of music, those around her are also learning who the real Piper Vaughan is – and she’s a heck of a lot braver and cooler than they could have ever suspected.

Email ThisBlogThis!Share to TwitterShare to FacebookShare to Pinterest
Labels: Antony John, YA