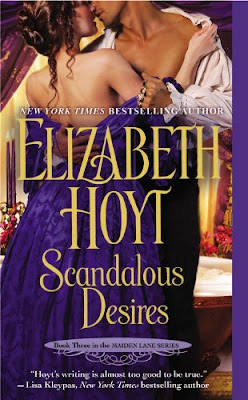 Can a pirate learn that the only true treasure lies within a woman’s heart?
“Charming” Mickey O’Connor is the most ruthless river pirate in London. Devastatingly handsome and fearsomely intelligent, he clawed his way up through London’s criminal underworld. Mickey has no use for tender emotions like compassion and love, and he sees people as pawns to be manipulated. Yet he’s never been able to forget the naive captain’s wife who came to him a year ago for help—and spent one memorable night in his bed...talking.

Widowed Silence Hollingbrook is impoverished, lovely, and kind--and a year ago she made a horrible mistake. She went to a river pirate for help in saving her husband and in the process made a bargain that cost her her marriage. That night wounded her so terribly that she hides in the foundling home she helps run with her brother. Except now that same river pirate is back...and he’s asking for her help.

Silence Hollingbrook once paid a pirate’s ransom to save her husband. She stayed the night with St Giles’s most notorious pirate king, Mickey O’Connor . . . one purely innocent night that ruined Silence’s reputation forever, and destroyed her marriage.

When Silence’s husband perished at sea she was heartbroken and drowning in grief, despite the fact that their marriage had been over ever since she’d agreed to Mickey’s offer.

The small ray of hope that dragged Silence out of her misery was Mary Darling, an abandoned baby left on her doorstep. Little Mary, with her head of black curls and pansy-coloured eyes filled the void left by her husband’s death.

But now Mary’s father has come to take her away . . . the pirate king, Mickey O’Connor.

Mickey is in the middle of a St. Giles turf war against the scarred and terrible Vicar of Whitechapel. Mickey has been battling the Vicar throughout his childhood, spent on the dangerous streets of St. Giles.

The Vicar has somehow got wind of Mary Darling and her adopted mother, Silence. Mickey will do anything to protect them – not out of the kindness of his own heart, but because nobody touches what’s his.

But when Silence agrees to stay at Mickey’s ‘palace’ and live amongst his looted treasures with Mary Darling, she starts to unravel Mickey’s history with the Vicar. She sees beyond his affluent criminality to a dark, wounded heart . . .

Silence and Mickey’s romance has been brewing since first book ‘Wicked Intentions’. For two books now we have been reading their heated dance – between Mickey’s impossibly cruel deals that tarnished Silence’s reputation, to Mary Darling’s appearance on her doorstep. Now ‘Scandalous Desires’ delivers fans the romance we have all been waiting for – between a notorious Pirate King and his virtuous woman.

Hoyt’s ‘Maiden Lane’ is one of the best historical romance series I have ever read. So to say that ‘Scandalous Desires’ is my favourite book thus far is big talk. . . and it’s all thanks to Mickey O’Connor.

Forget Jack Sparrow – Mickey is pirate du-jour, the hottest swash-buckler you’ll ever come across and a delicious fantasy. As is Hoyt’s trademark, Mickey begins the book as a total scoundrel and womaniser. He’s despicable and deplorable, greedy and unfeeling, utterly selfish in every way. The only reason he wants to protect Silence and Mary Darling from the Vicar is because they’re his, and nobody touches what’s his. Of course, Silence and all her virtue fascinated Mickey . . . she is his antithesis, pure and good, a sweet counterpoint to his black heart. But Mickey expects Silence to bend to his will and succumb to his charms.

Except Silence is nothing like the doxies Mickey usually beds. She is strong and self-possessed, viciously protective of those she loves and never afraid to speak her mind. Mickey is charmed, instantly and unfathomably.

Slowly, Mickey’s heart thaws to Silence and his own daughter, Mary Darling. He becomes desperate to protect them both from the Vicar, not because they’re his property but because if anything were to happen to them – he would never forgive himself.

If the babe died, Silence’s heart would be torn from her chest as surely as if a wild animal had savaged her. He had no heart himself, but he’d heard they were delicate things and easily broken. Mick growled low under his breath as he made his way to the front of the house. He knew how to protect Silence from knives and fists, from poverty and want, but he had no idea how – or even if – he could protect her from her own soft heart.

Mickey and Silence have the most explosive romance of any Hollingbrook sibling thus far explored. It’s partly thanks to Hoyt’s masterful building of their romance over the last two books . . . but also simply down to opposites attracting and Mickey’s climb to grace from such great depths.

A few new characters are introduced in this book, including Makepeace black sheep, brother Asa. And beloved secondary characters, like the prudish Winter Makepeace, are fleshed out and given glimpses into their upcoming books. I, for one, really hope that Asa Makepeace gets his own novel . . . because even the small, tantalizing little mention we get in ‘Scandalous Desires’ had me crossing my fingers for unlimited instalments in the incredible ‘Maiden Lane’ series!

‘Scandalous Desires’ is also the book that takes readers through the grimy streets of St. Giles, and reiterates the dangers of Maiden Lane. Because Mickey has lived in St. Giles all his life, and is its veritable King, Hoyt does some really masterful things with the descriptions of this sad little London town. Some of her scene-setting is truly magnificent for being mired in scum;

He crossed a street and looked up. The spire of the new St. Giles-in-the-fields loomed ahead. Mildew had destroyed the old church. Rumour had it that the mildew had fed upon the damp from the rotting plague corpses buried beneath the church flagstones. Certainly the air in the old church had held an evil stink.

‘Scandalous Desires’ is my favourite instalment in an incredible historical romance series. Mickey O’Connor is a sublime pirate rake, and an instant fictional favourite. ‘Desires’ ends on a delicious cliff-hanger concerning the Ghost of St. Giles . . . leaving me all aquiver for ‘Thief of Shadows’ in 2012. 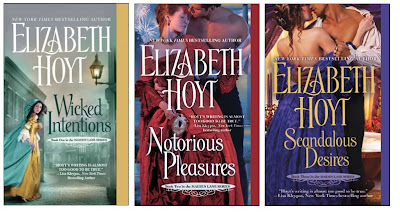