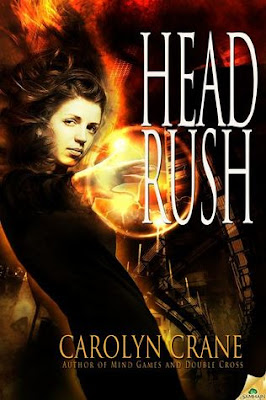 In an attempt to put her unhappy past behind her, Justine Jones throws herself into nursing school and planning her wedding to Otto Sanchez, the man of her dreams. But something is off. Random details aren’t adding up…and is it her imagination, or are her friends and fiancé keeping secrets from her? And what’s with this strange sense of unease, and her odd new headaches?

Justine tries to stay upbeat as Midcity cowers under martial law, sleepwalking cannibals, and a mysterious rash of paranormal copycat violence, but her search for answers leads her into the most dangerous mindgame yet.

With the help of unlikely allies, including her paranoid dad and best frenemy Simon, Justine fights her ultimate foe…and unravels the most startling mystery of all.

Product Warnings
This book contains high-speed rollerblade chases, a mysterious green dashboard ornament, a father of the bride in full hazmat gear and a delicious kebab.

For the longest time Justine Jones was ruled by fear. Her mother’s premature death by vein-star syndrome dictated her entire outlook on life and turned her into a neurotic hypochondriac. Justine couldn’t hold down a relationship, women’s health magazines were her kryptonite and any slight headache had her checking into the ER and going on hospital blacklist’s.

And then she met Sterling Packard, and he changed her life. . .

Justine was inducted into a neurotic superhero club – the Disillusionist’s – tasked with protecting the streets of Midcity from serial killers and con artists. Packard turned Justine’s neuroses into a power – able to inject people with her own hypochondriac fear and paralyze them with the power of her stoked terror. Packard, able to see people’s deep psychological secrets, introduced Justine to a justice crew of neurotics – people whose varying neuroses (from an absence of fear to an overabundance of gloom) could rehabilitate criminals and killers.

Otto and Packard had a history that started on the Midcity streets when they were homeless children. But now their bitter rivalry has turned deadly – with Packard on the run for the murder of a man Justine considered friend, and her best friend loved dearly.

While Packard is on the run for Avery’s brutal murder, Justine is planning her upcoming wedding to Otto. But when cold feet turns to icy realization, Justine knows she has to don the superhero guise once again and save Midcity from itself.

Thank god for ‘Head Rush’ and Carolyn Crane’s tenacity in the face of adversity! This book almost dissolved into the ether, when Crane was dropped from her Spectra publisher (who only contracted her for the first two books . . . in a trilogy!? Yeah. Massive WTF?). But two other publishers came in to save the day and reassure fans – Samhain and Audible.com (two publishers who now have my complete loyalty and fan thankfulness!). True, there were some odd release dates and formats (the audio book was released first, followed by the eBook and the paperback is a forthcoming 2012 release). Honestly, I don’t care how the final book got here, I’m just glad it arrived because if I had missed out on this catastrophically brilliant finale I'd have been pissed, and heads would have rolled!

‘Head Rush’ picks up where ‘Double Cross’ left off, give or take a few weeks. Justine and Otto are in the thick of wedding plans, and counting down the days to their big day. Only one black cloud looms over their happiness – Sterling Packard. Murderer of Shelby’s beloved Avery and currently MIA. Justine can’t stop thinking about what Packard did – what she saw him do. She can’t shake the image of Packard shooting Avery, point blank, and then fleeing the scene. And every time she does think about it, she gets a searing pain in her head that further exacerbates her vein-star fear . . .

Told from Justine’s perspective, fans are privy to the push and pull between her head and heart. Logically she knows that Packard is a murderer, but in her heart there is doubt. And if she and Otto don’t feel quite right, if she doesn’t really fit with him just yet, surely that will come with time and effort . . . but when Packard suddenly shows up, risking Otto’s bodyguards and stationed snipers, Justine’s loyalties and instincts become ever more scrambled, because Packard may just have a reason for her feeling so torn;

‘Head Rush’ is an understatement. In this finale Carolyn Crane is pulling out all the stops and tugging fans headlong into a fast and frenetic conclusion that sees Justine’s mind unravel, Midcity murderers cut loose and a wedding showdown extravaganza. ‘Head Rush’ is beyond apt, it’s freakin’ sublime!

The ‘Disillusionist’ trilogy has been one of the best urban fantasies I have had the good fortune to read. It’s a genre meshing of romance and action, crime fighting and psychological exploration. Our protagonist’s are neurotic superheroes, and it’s a series that pits bad guys against worse guys and turns heroes into frauds. Carolyn Crane has written some doozy characters – from the likeable, kick-ass hypochondriac Justine Jones to shady yet lovable double-dealer Sterling Packard. All her secondary characters shine too – like chip-toothed Russian Shelby who can find black in any silver lining, and recklessly dangerous Simon who revels in tempting fate. But one of Crane’s very best characters is Otto Sanchez . . . I admit, I had a great height to fall with regards to Otto’s character transformation, because at one point I was firmly on his Team. I was one of those readers whose jaw literally dropped at the end of ‘Double Cross’ (again with the beyond-apt titles, Crane!) because I was so firmly committed to my Team Otto stance. But therein lays the brilliance of Crane’s trilogy. She revels in writing murky characters that live in the grey areas.

I perish the thought this finale almost didn’t get into our hot little hands (Samhain & Audible should know that avid readers tend to have very long memories, and we won’t soon be forgetting how they made ‘Head Rush’ possible. Works on the flipside too, Spectra.) Fans of the ‘Dissillusionist’ trilogy will not be disappointed with ‘Head Rush’. We get a helter-skelter, all-guns-firing ending that will have your heart racing and hands shaking as you turn the page. I’m sad to read it end, but with a finale like that I can’t be too bitter. Brilliant! 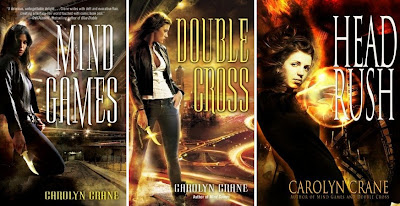