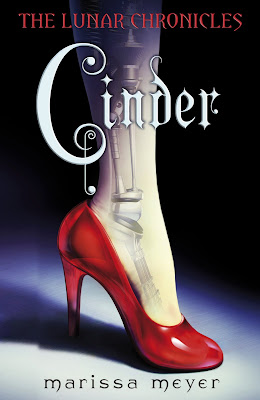 A forbidden romance.
A deadly plague.
Earth's fate hinges on one girl . . .

CINDER, a gifted mechanic in New Beijing, is also a cyborg. She's reviled by her stepmother and blamed for her stepsister's sudden illness. But when her life becomes entwined with the handsome Prince Kai's, she finds herself at the centre of a violent struggle between the desires of an evil queen - and a dangerous temptation.

Cinder is caught between duty and freedom, loyalty and betrayal. Now she must uncover secrets about her mysterious past in order to protect Earth's future.

New Beijing is under threat. The King is lying on his deathbed, his Queen already dead and his son, Prince Kai, feeling utterly unprepared for what the next few days could bring … because plague is ravaging earth. A plague called Leutmosis, with a high mortality rate and no known cure.

Above the earth, the Lunar planet looms large and foreboding, and Queen Levana has her sights set on Prince Kai for a political marriage. And as part of her bargaining, Levana is dangling a cure to Leutmosis before Kai’s eyes.

Down in the dregs of society works Cinder, New Beijing’s most talented mechanic. Cinder is also a Cyborg – a hated faction in this world, where the human/machine hybrids are considered monstrous and given few rights. And while the plague ravages the city, Cyborg’s are being drawn like a lottery for cure ‘experiments’, whether they like it or not.

Cinder is owned by wealthy woman, Adri, whose husband bought Cinder and then left her in his family’s care when he tragically succumbed to Leutmosis. Adri has two girls, the egotistical Pearl and lovable little Peony. They are not sisters, but Cinder loves Peony like she’s family.

Cinder works to pay Adri’s bills and clothe Pearl in pretty dresses. But when Prince Kai arrives at her mechanic stall one day, she is tasked with a new job that will have repercussions for everyone around her …

‘Cinder’ is the debut sci-fi Fairytale from Marissa Meyer, putting a new-world spin on the old ‘Cinderella’ story …

I have been looking forward to this book, ever since I fell in love with new ABC show ‘Once Upon a Time’, which puts old Fairytales in a kooky modern small-town setting. If vampires were 2009, angels so 2010 and zombie passé by 2011, then Fairytales is definitely the new theme du-jour of the paranormal/sci-fi scene. And Marissa Meyer’s ‘Cinder’ is jus the book to scratch this new itch!

As the title suggests, ‘Cinder’ is a reimagining of the old ‘Cinderella’ Fairytale. Except that out princess is a Cyborg, plague is ravaging the kingdom and the closest thing you’ll get to a fairy godmother is an adorable little android called Iko. A few footnotes of the traditional fable remain the same (if a little futuristically skewed), like Cinder’s ‘stepmother’ being her owner. A glass slipper is more likely to be a new detachable mechanical foot. And the pumpkin carriage is actually a (vintage) gasoline car!

Meyer has done wonders with twisting and modernizing the old ‘Cinderella’ tale, and with each modification and story adjustment comes new delights. Cyborg Cinder is ingenious – not only is she the downtrodden worker to her owner, Adri, but she is apart of a detested segment of society. I loved the ramifications this has on the story, Cinder as a minority in New Beijng, whose Cyborg ‘race’ is so discriminated against that a lottery has even been created to force them to be guinea pigs for cures against Leutmosis.

The setting of ‘Cinder’ is a future one not dissimilar to Joss Whedon’s TV series ‘Firefly’, in which the future had heavy oriental-influence (presumably because China and the like had become the new world power). Androids are servants, and Cyborgs are discriminated against. Above the Earth looms the Lunar planet, inhabited by beautiful people and ruled by an insane, vain, mind-bending Queen.

And since Meyer is sticking to a few Fairytale conventions, there is still a handsome prince (phew!). Kai is still reeling from his mother’s plague-death, and is now looking at a similar fate for his father … which would make Kai king. The crown holds even less appeal since Queen Levana set her sights on Kai as her husband. Levana has a particularly horrible history – there are rumours that she murdered her husband, scarred younger (prettier) female royals and organized an arson attack against her baby niece.

But when Kai requires mechanical assistance from Cinder, their crossed-paths has ramifications on the kingdom that neither of them could have ever imagined;

'I'm looking for a Linh Cinder,' said the prince. 'Is he around?'
Cinder dared to lift one stabilizing hand from the table, using it to tug the hem of her glove higher on her wrist. Staring at the prince's chest, she stammered, 'I-I'm Linh Cinder.'
Her eyes followed his hand as he planted it on top of the android's bulbous head.
'You're Linh Cinder?'
'Yes, Your High--' She bit down on her lip.
'The mechanic?'
She nodded. 'How can I help you?'
Instead of answering, the prince bent down, craning his neck so that she had no choice but to meet his eyes, and dashed a grin at her. Her heart winced.
The prince straightened, forcing her gaze to follow him.
'You're not quite what I was expecting.'

I did really enjoy ‘Cinder’. It’s a dusting off of an old Fairytale, and Meyer has customized her new imagining with much-needed updates. Like how Cinder is less ‘woe is me’ and more stubborn, take-charge. I would even say that the ‘evil’ stepmother is given a bit of heart in this new tale, and she’s all the more interesting for not being so black and white.

There are a few things that didn’t work for me in this book, and they have been touched on by other reviewers. Meyer isn’t great at in-depth scene setting – I got the ‘Firefly’ reference from other readers, and it’s only because I’m a devoted Browncoat that I was able to flesh out this futuristic oriental city in my mind. I would have liked more atmospheric writing on the city of New Beijing, beyond Meyer simply offering up the ‘Beijing’ name and expecting readers to add flying cars and androids to the City as we know it. I also think there were a few missed moments between Cinder and her ‘family’, particularly Adri and Pearl, the traditional ‘villains’. True, in Meyer’s new version the step-family aren’t the focus of evil, that’s much more Queen Levana, but I still think it would have been nice if Meyer had delved more into Cinder’s home life. Pearl, the rotten sister, is awful but doesn’t get much page-time and comes across as a little one-dimensional because of it. Adri, on the other hand, started out typically-villainous, but towards the end I wanted to spend more time with her since grief and circumstance fleshed her out with new dimensions…

But there are minor complaints about an otherwise breathtaking story. I was a little surprised by the ending, only because I thought ‘Cinder’ would be a stand-alone novel (I was under the impression that Meyer would be updating all the Fairytale princesses – ‘The Little Android’? ‘Beauty and the Robot’?). But I was pleasantly surprised to discover that ‘Cinder’ will be a continuing saga … and it makes sense, since so much of this first book is about building political upheaval and winding a royal mystery.

‘Cinder’ is a delightfully modernized spin on the old ‘Cinderella’ story. Marissa Meyer’s new Fairytale is a dark delight – about a plague-ravaged kingdom, a royal conspiracy and the Cyborg mechanic at the heart of it all. Brilliant!