'The Girl in Steel-Capped Boots' by Loretta Hill 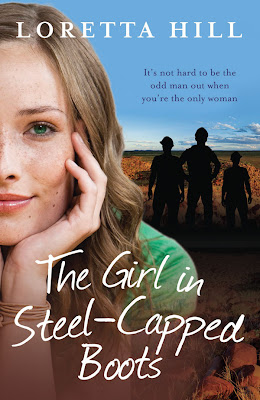 Lena Todd is a city girl who thrives on cocktails and cappuccinos. So when her boss announces he’s sending her to the outback to join a construction team, her world is turned upside down.

Lena’s new accommodation will be an aluminium box called a dongar.

Unfortunately, Lena can’t refuse. Mistakes of the past are choking her confidence. She needs to do something to right those wrongs and prove herself. Going into a remote community might just be the place to do that, if only tall, dark and obnoxious Dan didn’t seem so determined to stand in her way ...

Lena Todd has landed her dream job, as a graduate engineer for a major firm. After years of struggling through her Uni degree, she has come out the other side with a strong work ethic and a thirst for knowledge. But Lena has a lot to prove, to herself, a certain awful ex-boyfriend and her new company. So when she’s given the option of continuing desk work in the big city, or tackling a hard, on-location job in the outback of Pilbara, Lena decides to take the road less travelled …

Pilbara is unlike anything Lena has ever experienced. Red dust coats everything, kangaroos are hopping kamikaze and the residential accommodations are converted shipping-containers called ‘dongars’ (which barely house Lena’s three suitcases of clothing!).

But worse of all is the female-t0-male ratio. For the 350 male workers, there are only five females on site. And Lena is the only engineer (at first mistakenly thought to be the new cleaning lady by some of the men).

Sexual harassment if rife and varied – from gentle ribbing about being ‘Madame Engineer’, to wolf-whistles and leery old men.

But Lena will take it all on the chin for a chance to contribute to the Pilbara project – a massive wharf that cuts into the ocean and is a construction marvel.

But if the sexual harassment and on-site gossip isn’t bad enough, there’s also a bitter rivalry between the construction crew and the project’s commissioner – Daniel ‘Bulldog’ Hullog. Lena understands the crew’s wariness of Bulldog … sure, he’s handsome and rugged, with an interesting secret under his hard-hat … but he’s also a perfectionist, rude and keeping Lena up at night.

‘The Girl in Steel-Capped Boots’ is the new contemporary fiction novel from Australian author, Loretta Hill.

I loved this book! ‘The Girl in Steep-Capped Boots’ introduces us to Lena Todd – a woman full of contradictions. She’s young, in her early-twenties, but already with a chip on her shoulder and a point to prove. Admittedly she was a party girl at University, and nearly whittled away her degree until she decided to curb her wild ways. Lena owes a good deal of her final year success to her ex-boyfriend, also a professor at her university. But his parting words upon break-up have shaken Lena’s career confidence, and when she arrives in Pilbara she has a point to prove to herself, and her ex. I loved that Hill has written Lena as a bit of an enigma, to the point that even readers will be making assumptions about her that they find themselves backtracking on as the story progresses. Lena is a beautiful woman; which works against her at Pilbara where the men see her as a pretty face and not much else. Everyone is skeptical of her engineering abilities (even Lena herself!). But as the story progresses we read Lena’s guts and determination, her fight-fire-with-fire attitude and determination. It was as much fun to have my initial opinion of Lena turned around, as it was to read the men change their ways and treatment of her.

‘You’ve been a disaster zone since you got here.’
It was true on all fronts, including her engineering.
She tapped a pencil on her notepad. What she needed was some firm goals – a road map she could use to avoid the personal traps laid for her by Mike and Gavin … and Dan. Something that would prove her worth, not by getting Dan’s approval or even Carl’s but something tangible that she could hold up and say, ‘That’s what I did and that’s why I’m good.’

Hill’s novel is peppered with some wonderful secondary characters. There’s Sharon, the shy female bus-driver who becomes Lena’s friend and ally on the male-dominated site. Sharon is crushing on a ridge worker, while blinded to unrequited love from an unlikely source. Carl is Lena’s boss, a burly man who drops the f-bomb as much as he blinks, but has a heart of gold underneath his caveman exterior. Gavin is the young gun eager to impress, and there are any number of lovable nicknamed wharf workers like Leg, Fish and Radar who come to form a tight friendship unit for Lena.

And then there’s Dan ‘Bulldog’ Hullog – the site’s commissioner in charge of bossing everyone about and demanding that work be sped up. Dan is handsome and prickly. He insists on living on-site with the men (despite how much they all hate him) and refuses to take his R&R week-off for unknown reasons. I loved Dan! He’s a typical man’s man, but hiding a heartbreaking secret that explains some of his boorishness. He and Lena butt heads, repeatedly and hilariously, throughout the book. But when their opposites-attract heat turns into something more, they become gossip fodder for the site.

The real star of Loretta Hill’s novel is Pilbara. Hill is writing about a very unusual setting that fosters camaraderie and temporary family in a harsh environment and claustrophobic working conditions. The Pilbara site will be home to the 350 men for the better part of a year (if not longer) and they form tight bonds of friendship with one another. They’re away from home and far from family – living and working in the outback with its harsh terrain and red landscape. At first readers will be like Lena, mortified and horrified at the schoolboy antics of the workers and unimpressed by the remote location that is the antithesis to urban city life. But as the novel progresses something strange and wonderful happens, for Lena and readers alike … Pilbara becomes home.

Sharon grinned. ‘You’ve got the Pilbara under your skin.’

As the story progresses Pilbara becomes an interesting microcosm of home, friendship and family. Lena forms bonds with her teammates and work crew, and you read how this remote work location changes the people who live there. What’s really amazing though, is to think that after living and working there for six months everyone will eventually just leave. Disband and never see each other again – after living in one another’s pockets they’ll just walk away, probably onto another site where they’ll start all over again. Loretta Hill is definitely tapping into an interesting location that has fascinating ramifications on our protagonist’s state of mind and interactions.

‘The Girl in Steel-Capped Boots’ is a fabulous Aussie read. Loretta Hill has set her love story in an unconventional and barren location that is wholly original for its hilarious social effects. Lena is a surprising protagonist with a lot to prove, and her romance with Dan ‘Bulldog’ is fiery and forbidden. The secondary characters make this novel unforgettable (including aforementioned kamikaze kanga’s). This is summer reading du-jour and a guaranteed home-grown pleaser. 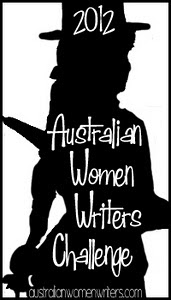