'I'll Be There' by Holly Goldberg Sloan 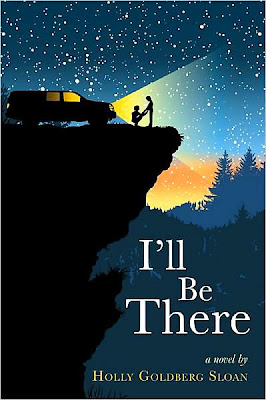 Raised by an unstable father who keeps the family constantly on the move, Sam Border hasn't been in a classroom since the second grade. He's always been the rock for his younger brother Riddle, who stopped speaking long ago and instead makes sense of the world through his strange and intricate drawings. It's said that the two boys speak with one voice--and that voice is Sam's.

Then, Sam meets Emily Bell, and everything changes. The two share an immediate and intense attraction, and soon Sam and Riddle find themselves welcomed into the Bell's home. Faced with normalcy for the first time, they know it's too good to last.

Told from multiple perspectives, Holly Goldberg Sloan's debut novel offers readers fresh voices and a gripping story, with vivid glimpses into the lives of many unique characters. Beautifully written and emotionally profound, I'll Be There is a story about connections both big and small, and deftly explores the many ways that our lives are woven together.

Sam Border has never settled down in one place. His father, Clarence Border, hears voices in his head, voices that tell him to run and never look back. So that’s what the Border’s have been doing – running, and hiding and never looking back.

It’s Sam’s job to take care of himself and his little brother, Riddle: because Clarence isn’t exactly the nurturing type. Sam and Riddle scavenge for food in bins and dumpsters. Riddle sketches the inside of things, speaks through his older brother and tries to avoid Clarence’s wrath.

Sam keeps a battered old guitar with him, the one constant in his sixteen-years of travel. He received the guitar from a blind man, and taught himself to play. Because for Sam, music is God. No matter where he goes, what town he ends up in or running away from, Sam seeks out music at Sunday sermons.

But one Sunday is different from all the others. Because this Sunday, Emily Bell is (reluctantly) singing – to him. To Sam she sings a song that triggers a series of catastrophically brilliant events that winds them ever closer …

I'll reach out my hand to you
I'll have faith in all you do.
Just call my name and I'll be there.

‘Ill Be There’ was the 2011 young adult novel from debut author Holly Goldberg Sloan.

Told from an omniscient third-person narrator, ‘I’ll Be There’ is the twisted journey of lost boys, Sam and Riddle Border – and how they imprinted on the lives of a little town that couldn’t let them go.

It all begins when Emily Bell spies Sam in the back pew of her family church, while she sings a terrible rendition of a Jackson 5 number;

She could not really sing.
That was just a fact.
But it was also a fact that she was riveting. She was raw and exposed and not really hitting the notes right. But she was singing to him.
Why him?
He wasn't imagining it.
The girl with the long brown hair had her small hands held tight at her sides and, maybe because of how bad she was, or because she was staring right at him and seemed to be singing right to him, he couldn't look away.
She was saying she'd be there.
But no one was ever there. That's the way it was. Who was she to tell him such a thing?
It was intimate and suddenly painful.
Not just for her.
But now for him.
Very painful.

Emily and Sam share a connection – while she warbles and he watches, their lives become entwined, for better or worse. Emily searches for the illusive boy all over her town, to no avail. The Border’s have been taught to lay low and avoid notice. They are squatting in an abandoned rental property, and Clarence is partaking of petty thieving for some extra cash. But Clarence also sleeps in their truck every night, with a loaded shotgun, saltine crackers and a barrel of vodka – ready to escape if the voices warn him of impending doom.

A local ad for cheap haircuts throws Sam back in Emily’s path… as does a chance encounter during Emily’s bad date with classmate Bobby Ellis. Sam and Emily embark on a doomed relationship – Sam, unable to keep up with Emily’s conversations (he doesn’t have a mobile, email or Facebook, for starters) and Emily’s mother and father are wary of Sam’s odd behaviour and reluctance to admit much about himself.

Bobby Ellis is also curious about Sam, and how his appearance in town coincides with a slew of robberies. The more curious Bobby becomes of Emily Bell and her mystery boy, the more he wants Emily for himself … and luckily Bobby has the resources to do some snooping – thanks to his parents, a lawyer and detective respectively.

Slowly, the Bell’s come to accept and care for the Border boys. Sam is a musical prodigy, and should be enrolling in Tim Bell’s university music program. And Debbie Bell is determined to nurse and care for little Riddle, who suffers from Asthma and appears to have never had a doctor check-up.

But just when things start to settle for the Borders, when Sam starts to fall in love with Emily and the Bell family become smitten with Riddle … the voices warn Clarence to escape.

‘I’ll Be There’ is a superb debut from Goldberg Sloan. The novel has a perpetual feeling of doom – as we move back and forth between Sam’s history ‘on the run’ with his unstable father, to the present and how Clarence is becoming increasingly suspicious of his boy’s behaviour. We know that this push-and-pull between Sam and Clarence’s ‘fight or flight’ will not end well. But, despite this foreboding, Goldberg Sloan has also imbued the novel with a lot of heart and warmth.

Sam and Riddle are gorgeous. Sam is simply delectable – a caring and sweet young man, unencumbered by pop-culture ideas of masculinity and ‘norms’; being in perpetual motion with his crazy father has made Sam, unwittingly, into a rather charming and kind young man. Totally different from his teenage adolescent male contemporaries. Sam only wants to protect his little brother, be near the girl he likes and play his music. He’s utterly charming.

Riddle, likewise, is a darling. He wheezes when he breathes, speaks through his brother and looks at things from the inside-out, or bottom-up. He is a bright and curious child, who makes you want to reach into the book and wrap him in a warm hug.

The plot is beautifully crafted – and even though I thought I knew where the book was going, I was surprised to find the story being carried into the wilderness … For all the sense of menace and foreboding, the heart of ‘I’ll Be There’ comes from the Border boys being wanted. When the inevitable happens and Clarence insists on fleeing, Emily’s presence in Sam’s life makes a difference – suddenly he and Riddle are not so easily let go. It’s a heart-warming lesson in the centre of a story so full of craziness.

I will say that ‘I’ll Be There’ reminded me a lot of the (brilliant) 1988 River Phoenix film ‘Running on Empty’ – about an activist family on the run from the FBI. The book and movie have similarities in the brotherly bond, a girl that makes the runaway want to stay, but especially for the music connection … the one big difference being that, in the movie, family is a safe harbour and hard to let go of. In ‘I’ll Be There’ Clarence is a confused villain – living on the whims of his mental illness, he is a brilliant ‘baddie’ for his unpredictability.

I loved 'I'll Be There', and fully intend to read whatever else Holly Goldberg Sloan writes. Sam Border is a real treasure, and this novel will not be easily forgotten.

Email ThisBlogThis!Share to TwitterShare to FacebookShare to Pinterest
Labels: Holly Goldberg Sloan, YA