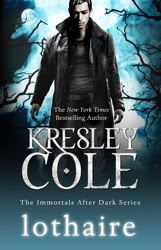 ALL FEAR THE ENEMY OF OLD
Driven by his insatiable need for revenge, Lothaire, the Lore’s most ruthless vampire, plots to seize the Horde’s crown. But bloodlust and torture have left him on the brink of madness—until he finds Elizabeth Peirce, the key to his victory. He captures the unique young mortal, intending to offer up her very soul in exchange for power, yet Elizabeth soothes his tormented mind and awakens within him emotions Lothaire believed he could no longer experience.

A DEADLY FORCE DWELLS WITHIN HER
Growing up in desperate poverty, Ellie Peirce yearned for a better life, never imagining she’d be convicted of murder—or that an evil immortal would abduct her from death row. But Lothaire is no savior, as he himself plans to sacrifice Ellie in one month’s time. And yet the vampire seems to ache for her touch, showering her with wealth and sexual pleasure. In a bid to save her soul, Ellie surrenders her body to the wicked vampire, while vowing to protect her heart.

CENTURIES OF COLD INDIFFERENCE SHATTERED
Elizabeth tempts Lothaire beyond reason, as only his fated mate could. As the month draws to a close, he must choose between a millennia-old blood vendetta and his irresistible prisoner. Will Lothaire succumb to the miseries of his past . . . or risk everything for a future with her?

Lothaire is an exiled heir. Legitimate King to the thrones of two vampire factions – the Horde and Dacia – he has spent centuries trying to take what is rightfully his. Plagued by his mother’s dying wishes for her little prince, Lothaire has gained a name for himself as ‘The Enemy of Old’ – and he earned it well and bloody.

A prophecy foretells that Lothaire can only take the two thrones with a blooded bride by his side. Good thing then, that his initial instincts that a mere mortal girl living in the Appalachia Mountains proved incorrect, she is not his bride . . . instead, Lothaire’s intended is a cursed goddess, who has taken up residence in this girl’s body.

Elizabeth Peirce has a demented goddess living inside her body. Nothing, not exorcism or death by lethal injection, will rid Elizabeth of Soroya’s menace. And when a red-eyed demon swoops down and commands Elizabeth to keep his bride safe, she knows her soul is doomed and her body will be taken from her.

This twelfth book is, without a doubt, the most-anticipated in Cole’s series. Lothaire piqued fan’s interest as the ‘Immortals’ bad-boy du-jour, especially with his appearance in book eleven, ‘Dreams of a Dark Warrior’. Lothaire very much came across as an ‘out for himself’ cruel villain. He doesn’t care a fig for others and is wholly consumed with his own desires – mainly, the crowns of two vampire factions. Lothaire’s special vampiric power comes from gaining memories from those he takes blood from. And he uses his ‘ability’ with great cunning and little sympathy. He was deliciously dark and dangerous, and many fans swooned and drooled at the prospect of his book . . . not least of all because the paranormal romance genre has taught readers that, the more devilish the rogue, the better the HEA. Which might be why ‘Lothaire’ doesn’t quite live up to the hype of fan’s lofty expectations . . .

We learn from the start that Lothaire despises humans. They killed his beloved mother, and ever since then he has treated them as little more than fleas. So when Lothaire felt a draw to the Appalachia Mountains, and a young human child called Elizabeth Peirce, he was convinced there was some sort of mistake. He felt no blooded-bride pull towards her, but regardless kept returning to the Mountains at various times to see her turning from a child to woman. Still, he was disgusted by the mere thought of a human for his bride, and was relieved when he returned one day to find a thousand-years old goddess had taken up residence in Elizabeth’s body. A goddess called Soroya, who kills indiscriminately and is making Elizabeth’s life hell. But she is powerful beyond measure, and far more likely to be Lothaire’s intended life mate. Not least because Lothaire cannot fathom being bonded to a human, let alone a ‘hillbilly’ human’;

“How do you know it’s not me who’s . . . blooded you?”
A muscle ticked in his jaw. “Because fate would not slight me so unspeakably. I'd seek a noon-day sun if I were paired with one such as you.”
“Such as me,” she repeated blandly. She’d been mocked too often over her lifetime to take offense. Her skin was as thick as armour.
“Yes, you. An ignorant, mortal Kmart checkout girl.” He took the sharpest knife from his place setting, absently turning it between his left thumb and forefinger.
“Kmart? I should’ve been so lucky. Those jobs were hard to come by. I worked at my uncle’s outfitter shop.”
“Then you’re even worse. You’re an outfitter checkout girl with aspirations for Kmart.”

Now all Lothaire needs is a magic ring to kill Elizabeth’s soul, make Soroya a vampire and keep her preserved in Elizabeth’s body forever. No problem. Except that an evil mummified she-villain is hot on their tail and he has one month to blood his bride . . . all while resisting the annoying allure of the human, Elizabeth Peirce. No problem.

I think one of the down-falls of this particular ‘Immortals’ book, is the lack of secondary characters. I think the last time an ‘Immortals’ book was focused primarily on just two characters was in the second instalment, ‘A Hunger Like No Other’, which also had a kidnap/hostage storyline. But the problem with doing a similar story in this twelfth book is simply that, as a reader, you miss that cast of hilarious and unique secondary characters we’ve come to know and love. We have become so used to a cache of Valkyries, Berserkers, Witches and Lycans that to read a book in which they make minimal appearances (mere paragraphs in some cases) feels lacking somehow. And when Lothaire is such an anti-hero, the book felt doubly claustrophobic because his hatred of Elizabeth and humanity becomes a little too all-encompassing and dreary. I think the book only started to pick up for me towards the end, when Elizabeth starts hanging out more with Lothaire’s resident oracle, a poison-skinned Immortal called ‘Hag’. And when Thaddeus (the Eagle Scout/Quarterback and half-vampire of book eleven) makes a delightful reappearance, acting as Lothaire’s only best-buddy. When these other characters were thrown into the mix, the story started to feel more like an ‘Immortals’ instalment, when Lothaire and Elizabeth had these other people to bounce repartee off of, things got funny and a little more light-hearted.

As it is, because much of the book is just Lothaire and Elizabeth, the progression of their relationship also came across as a hellacious case of Stockholm Syndrome. Lothaire really makes it hard for Elizabeth to fall for him – what with his total degradation of her humanity, family, socio-economic standing etc, etc, etc. And I also had a problem with the fact that pretty much the only thing that draws these two together is good looks. Lothaire laments that Elizabeth is so beautiful, because it makes resisting her that much harder. And when Elizabeth can find nothing redeeming in Lothaire, she still falls for him (presumably because he’s pretty on the outside, regardless of being ugly on the inside). It’s not a great message to send out – all looks, no substance – and it’s disappointing because Cole’s characters are usually deliciously witty and crass, laugh-out-loud funny and with a certain verve that makes them irresistible, despite otherwise prickly demeanours.

Still, the book did pick up towards the end . . . when Lothaire starts interacting with other vampires and Elizabeth meets the Valkyrie. When surrounded with these secondary characters we have come to know and love, the book’s pace picks up and careens us towards a most fulfilling and interesting end. Not to mention things just get a heck of a lot funnier when more Immortals are added into the mix;

And I was over-the-moon with the ending, because it hints at more Lothaire appearances in book thirteen in a truly cunning twist of fate. And I do think that Lothaire’s character transformation at the end of this book will make him easier to swallow in upcoming ‘Immortals’ appearances . . . as it is, Lothaire is a bit too much of the evil anti-hero throughout a lot of this book. Perhaps we needed him diluted with a bit more humour (even of the mocking variety), but for me the much-anticipated ‘Lothaire’ instalment was a wee bit underwhelming. 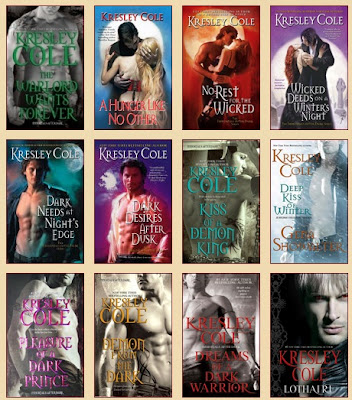