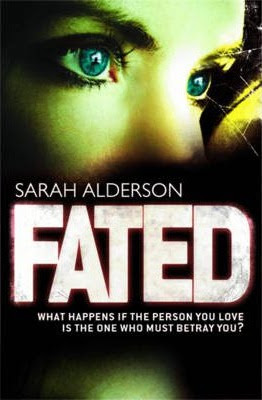 What happens when you discover you aren't who you thought you were? When the person you love is the person who must betray you. If fate is already determined - can you fight it?
Lucas Gray is half Shadow Warrior, half human, and a member of the Brotherhood - a group of assassins tasked with killing the last purebred Hunter on Earth before she can fulfil a dangerous prophecy. The Hunter's name is Evie Tremain.

Evie Tremain is seventeen-years-old, a waitress and has just discovered she is the last in a long line of demon slayers - and an unwilling participant in a war between Hunters and unhumans that has raged for the last thousand years.

Evie Tremain is not having an easy time of it lately. She is still reeling from her best friend, Anna’s, recent death in a car accident. But even worse than that was learning that Anna and Evie's boyfriend, Tom, were seeing each other behind Evie’s back. Not to mention the fact that Tom was driving the night Anna died.

Evie’s pain is ten-fold, considering her father died two years ago and she was still succumbing to the loss when Anna died and her betrayal was revealed. So the last thing Evie needs is a late-night robbery at the diner where she works…

Except these aren’t your run-of-the-mill thugs. There’s a boy with red eyes and a whipping tail, a green-tinged girl and a young man with yellow fangs. Evie can’t believe her eyes when she’s attacked by this motley crew of freaks late one night. Even more amazing is when the new stranger to town, Victor, comes to her rescue brandishing a gun.

But Evie had better start believing, because as Victor explains to her, Evie is a hunter linked to the White Light prophecy. He explains about veiled worlds where demons lurk – poison skinned Mixen and vampires called Thirsters. And these creatures want to take earth for their own. All that stands between us and them is the Hunters. Evie’s biological parents were killed by one of these ‘unhuman’ creatures, a Shadow Warrior. And now it’s up to Evie to seek revenge for their murder.

While Evie learns about her heritage and the dangerous fate that awaits her, Lucas looks on. He is an unhuman – half Shadow Warrior – and he has been tasked with watching and monitoring Evie’s training progress. But the more Lucas watches from the shadows, the more he wants to get to know Evie…

‘Fated’ is the first book in a new young adult paranormal series by Sarah Alderson.

Alderson blew me away last year with her gripping supernatural novel, ‘Hunting Lila’. So of course I jumped at the chance to read more by this talented new author.

‘Fated’ is more of the same action-packed helter-skelter supernatural thrill riding that Alderson excelled at in ‘Hunting Lila’. Except this time the cast of supernatural characters is a little more traditionally monster-ish. Alderson’s ‘monsters’ are a mixture of traditional and imaginative. The poison-skinned Mixen girl is a wonderful creation – flouncing around in a tight, pink mini which clashes with her deadly green skin. Some of Alderson’s characters are new twists on old legends, like the ‘Thirster’, or as we know them; vampire (an unhuman species who have very good PR lending them their ‘romantic’ persona in pop culture!).

“Are you trying to tell me that was Edward Cullen outside? Because you know, I thought he was supposed to be hotter than that. And a whole lot more romantic.”

But the real draw-card of this series is the star-crossed forbidden love of Evie and Lucas. Evie, who has only just discovered the unhuman realm and her destiny defeating it, and Lucas, a Shadow Warrior tasked with watching over Evie … until the time comes that he must kill her. As a Shadow Warrior, Lucas can disappear at will and so he watches Evie from the shadows, slowly falling in love with her while observing quietly intimate moments that have him questioning all he knows about the 'evil' Hunters ...

She was staring right at him but then she frowned before screwing her eyes shut again. He melted backwards and when she opened her eyes again he saw the confusion as she stared at the empty space around her.
And then in a move he couldn’t have foreseen she hurled the circular blade right at him. It grazed the air a millimetre to his left. Damn it. She was aware of him. She was feeling him.

I did like Lucas and Evie, even if their romance felt a little rushed. Lucas is posing as a renter at Evie’s house, where she lives with her mother. Their romance is also sped-up by the side-story about Evie’s cheating ex, who rouses Lucas’s instinctually possessive feelings towards Evie. I know the plot conveniently threw Evie and Lucas into close-quarters, and had them sharing intimate details (when Evie explains about her break-up with Tom) but I was still feeling a little whip-lashed by their romance. However, the great ending did give me high-hopes that the Evie and Lucas romantic saga will get exponentially more interesting and heated in upcoming books. I can’t wait!

Overall I really enjoyed ‘Fated’. Sarah Alderson is definitely cementing her paranormal place with this second action-packed blockbuster of a book. I look forward to reading more!