Once the flames are ignited . . .
Miranda Ellis is a woman tormented. Plagued since birth by a strange and powerful gift, she has spent her entire life struggling to control her exceptional abilities. Yet one innocent but irreversible mistake has left her family’s fortune decimated and forced her to wed London’s most nefarious nobleman.

They will burn for eternity . . .
Lord Benjamin Archer is no ordinary man. Doomed to hide his disfigured face behind masks, Archer knows it’s selfish to take Miranda as his bride. Yet he can’t help being drawn to the flame-haired beauty whose touch sparks a passion he hasn’t felt in a lifetime. When Archer is accused of a series of gruesome murders, he gives in to the beastly nature he has fought so hard to hide from the world. But the curse that haunts him cannot be denied. Now, to save his soul, Miranda will enter a world of dark magic and darker intrigue. For only she can see the man hiding behind the mask.

When she was just ten-years-old, Miranda Ellis bought her family to ruin. A warehouse fire left her father in debt and saw her beloved sister, Daisy, being sold off in marriage to the highest bidder in an effort to regain funds. Miranda’s father insisted that she start thieving to repay the damage she had done to the family . . .  even though the fire was beyond her control. Because Miranda has pyrokinetic ability, and since childhood she has feared being consumed by the flames she can conjure with her mind.

Hector Ellis owes a lot of people a lot of money, one of them being Lord Benjamin Archer. But when Archer goes to collect his blood debt, he comes across young Miranda Ellis – dressed as a boy, cornered in a back alley by a group of thugs. Archer steps in and aids the young girl, whose disguise cannot hide her ravishing beauty – Botticelli red hair and exquisite features which will ripen as she grows into a woman. Archer leaves the young, eighteen-year-old Miranda, refusing to reveal his true identity to her. Unbeknownst to her, Archer has decided to spare Hector his life, and take his payment another way. . .

Three years later and Lord Archer has come to collect Miranda Ellis, his new bride. Both are nervous about the reunion. Miranda is especially hesitant, because her father has offered her up like a lamb to slaughter for a little bit of money . . .  and because her new husband is the Dread Lord Archer. The man who makes women faint for fear and clears a path wherever he goes. Because Archer wears a mask, always – black silk covers his entire face and neck, and a hard mask on top of that means nobody knows Archer’s true age, or what disturbing deformity has him hiding away in plain sight.

Archer is equally nervous. He burns for Miranda, and has for these past three years. He feels a connection to the young beauty, and he wants her with a longing that pierces his soul. But he fears what will happen when he drags her into his world, if he lets her see the beast beneath the mask. When Archer’s old friends of the debunked ‘West Moon Club’ start dying in gruesome murders that point back to Archer and his secret, he is sure he has made a mistake in taking Miranda for his own. But the heart wants what the hearts wants, and Archer has always known Miranda was meant for him. . .

This novel crept up on me. I bought it on a whim because I was intrigued by the Diana Gabaldon puff quote on the front cover . . .  and I’m so glad that I did. I cracked this book open, thinking that I'd give the first page a read, just to get an idea of it, and then maybe put it somewhere near the top of my ‘To Be Read’ pile . . .  a few hours later I was holed up in my room, devouring the last pages and thanking the reading Gods that I'd stumbled across this little gem!

Our hero and heroine have a chance meeting under dubious circumstances . . .  while out to murder her father; Lord Archer stumbles across Miranda Ellis in a dangerous situation and instead rescues her, deciding that when she’s older he’ll take her hand in marriage instead of her father’s life. An interesting start to a romance, to be sure. Skip ahead three years and Miranda is none the wiser that her new husband, the masked and mysterious Dread Lord Archer, is the same man from the alleyway all those years ago. All she knows is that Archer leaves a swirl of gossip and whispers in his wake, wherever he goes . . .  he never takes off his mask (not even to prepare his new bride for what’s in store for her) and soon after their nuptials, strange and murderous occurrences that point to Lord Archer as the main suspect start plaguing their marriage. . .

Callihan’s book sounds like a lot of mysteries, wrapped in conundrums and peppered with a little ‘whodunit’ for good measure. And certainly there is a lot going on in this novel – between Archer’s elderly friends dying, Miranda following the clues back to a ‘West Moon Club’, a search for immortality and Miranda herself dealing with her pyrokinesis. . .  there is a lot happening in this book. But Callihan writes with an enviably deft hand – she gives readers just enough slack about the mystery to keep us in suspense, while writing calculating sleights of hand and a smouldering romance that keeps things tantalizing. This is a novel with lots of plots and back-stories going on, but Callihan is such a marvellous storyteller, juggling the paranormal, mystery and romance angles to perfection.

The paranormal and mystery plots in ‘Firelight’ all lead back to the ‘West Moon Club’, and rumours that this odd and now disbanded club were once on the scientific hunt for immortality . . .  this mystery also leads Miranda to clues about Lord Archer, and what lies beneath his mask. This paranormal mystery is absolutely delicious – Callihan has been influenced by a Norwegian fairytale, called ‘East of the Sun and West of the Moon’ – which is a little bit like ‘Beauty and the Beast’, with many more interesting origins and themes.

The mystery is made all the more tantalizing for being set in an unaltered history. Normally when the historical and paranormal genres cross-over it’s for Steampunk purposes, or the world setting is altered so that supernatural beings are ‘out’ in society. Not so in ‘Firelight’. London in 1881 is just as the history books remembered . . .  what’s cunning and curious is that the supernatural was always lurking beneath the surface. Miranda keeps her pyrokinesis a secret, and there’s a certain ton family who occasionally flash yellow eyes and have a particular affection for the moon . . .  but all of this remains a secret, hidden beneath the veneer of genteel London aristocracy. I loved this – it adds another layer of tension that all he supernatural business is being conducted in secret, while all the players have to keep up appearances in society.

The mystery and supernatural story in ‘Firelight’ is delicious and frightening – but the show-stopper of this book is the romance, and the characters of Miranda and Archer.

Now, normally I hate the ‘love at first sight’ angle in romances, but Callihan writes this old cliché with new vitality and utter believability. Despite his masked appearance and the puzzle of what he’s hiding beneath the mask – Miranda is drawn to Benjamin Archer, and he to her. At one point he remarks that it’s like there’s an invisible string connecting them – so he’s always aware of her, knows where she is and forever on his mind. And even though she has not seen his face, doesn’t know the extent of his secret or even how old he is, Miranda feels closer to Archer than anyone else she has ever met. Archer and Miranda are, without a doubt, a new favourite paranormal couple. They have sensuality and passion, tempered with mystery and blind love, and they share some of the most heart-stoppingly romantic moments;


The wide expanse of his chest brushed against hers, as he leaned in. “You’re collecting pieces of me, aren’t you?” His voice turned thick as warm toffee, rolling over her skin, heating it. “A bit here. A bit there. Soon you’ll set me out on the table, try to fit me back together.”
Ignoring the flurries plaguing her belly, she affected blandness. “I've only got the corners. But it is a start.”
A warm breath touched her neck. “I believe you have the centrepiece as well.”

I absolutely loved ‘Firelight’. The second book in the series comes out in August, and I’m already counting down the days! The second book will focus on Miranda’s older sister, Daisy, and the cunning Ian McKinnon of yellow eyes and Luna obsessions. I really liked Ian in ‘Firelight’, even though he causes quite a stir between Miranda and Archer . . .  his book is sure to entertain. In the mean time, I will be hunting down a copy of ‘Ember’ - the short prequel to ‘Firelight’ which focuses on Miranda burning down her family’s fortune.  ‘Firelight’ is a stunning debut in what promises to be a brilliant new paranormal historic series. I look forward to reading more ‘Darkest London’ stories, but I also think that whatever Kristen Callihan writes – be it historical, paranormal, romance or other – she will be a new automatic-buy author for me. 5/5 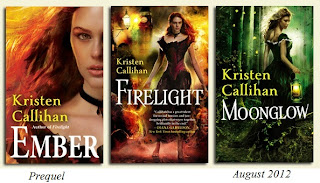