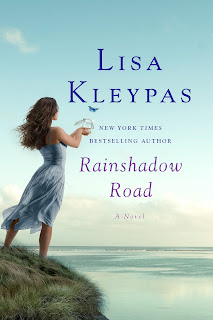 Lucy Marinn is a glass artist living in mystical, beautiful, Friday Harbor, Washington, with a boyfriend, Kevin, who she believes is her soul mate. She has always had a magical side - a gift that finds its way into the breathtaking glasswork she creates - and she struggles to keep it contained. But when Lucy is blindsided by the most bitter kind of betrayal, she questions many of her choices. Her boyfriend leaves her and his new lover is none other than Lucy's own sister. Lucy's bitterness over this devastation is multiplied buy the fact that she has constantly made the wrong choices in her romantic life.

Meanwhile, facing the severe disapproval of Lucy's family, Kevin asks his friend Sam Nolan, a local vineyard owner on the San Juan Island, to "romance" Lucy so that she can more easily move on. But when Sam and Lucy begin to feel real sparks between them, Lucy must ask herself if she can easily risk her heart again.

As Lucy questions her beliefs about love, loyalty, and old patterns, mistakes, and new beginnings, she explores the possibility that some things in life - even after are being broken - can be re-made into something beautiful. And that is the only by discovering who you really are that you can find the one who truly deserves you

Lucy’s bad day is rapidly turning into a bad year.

First, her boyfriend of two years dumps her. But Kevin doesn’t let her down easy, oh no! He needs Lucy to move out of their San Juan apartment pronto, because her sister, Alice, is moving in… her younger sister, who it turns out Kevin has been cheating on her with.

Lucy really shouldn’t be so surprised. Little Alice has always taken what she wants and damns the consequences. A childhood illness left Alice, the Marinn family darling, precious and spoilt, so she has never had to struggle or work for anything – and she sees Kevin as just one more entitlement.

In the wake of her bitter break-up, Lucy takes solace in her glass-blowing artwork. Shutting herself away in her studio, left to work with the beautiful coloured glass making sculptures, ornaments and stained-glass windows to her broken hearts content. She moves into a local B&B, run by cousins Justine and Zöe. Lucy swears off men, and focuses all her energy on winning a New York art program scholarship…

And then fate throws Sam Nolan in Lucy’s path. Sam is a local wine grower, who lives in a beautiful, sprawling and dilapidated Victorian house with his older brother, Mark, and their orphaned niece, Holly.

The Nolan brothers did not have an idyllic childhood. The product of two dependent alcoholics, the Nolan name was blackened for many years in San Juan – and it’s only in recent times, with Sam’s successful grapes and Mark’s roaring coffee-bean industry that they’re starting to be accepted into the small town. Although youngest Nolan brother, Alex, is working hard to live up to their parent’s bad behaviour – drinking and moping in the wake of his divorce.

Sam repeatedly bumps into Lucy after her apocalyptic break-up, and he is curious about her and enchanted with her sad green eyes. Friends with Justine, Sam is more than happy to try wooing the clearly wounded Lucy. And when Kevin and Alice get engaged, Lucy becomes increasingly open to Sam’s no-strings-attached flirtations.

What do you do when the magic leaks out of life? How do you learn to take a leap of faith when history tells you you’ll just end up with another busted heart …?

I have a deep affection for Lisa Kleypas’s original contemporary romance series, the ‘Travis’ trilogy. ‘Sugar Daddy’ was my first-ever Kleypas read; I didn’t know she had a long backlist of historical romance novels, and thought she was an excellent contemporary romance writer, excelling in that especially lovely romance sub-genre of ‘family saga’. But once ‘Travis’ was over (though I still have my fingers firmly crossed for a Joe book) I was a little bummed to learn that she had no other contemporaries for me to plough through. Sure, I went back and read her ‘Wallflowers’ and ‘Hathaways’ series, but I really wanted another modern-day foray. So I was thrilled when the ‘Friday Harbor’ series was announced. Unfortunately, first book ‘Christmas Eve at Friday Harbor’ left me thoroughly disappointed. Sure, I liked the story and set-up, the romance was okay (if a little tepid), but the short length of the first novel left me frustrated. But I had high hopes for the rest of this series – especially because I loved the San Juan setting, in an idyllic little town just off the Washington coast.

Lucy Marinn is our protagonist in this second instalment. The book opens in flashback to Lucy’s childhood when her younger sister, Alice, contracted meningitis and was subsequently treated like a princess by her mother and father (a trend that followed into adulthood). Flash forward and Kleypas introduces us to an older Lucy experiencing her worst day, when her long-term boyfriend announces he’s dumping her, for her younger sister. And if that sounds fairly soap-operaish, you’d be right. The dumping scene is not a great start to the book – a bit ham-fisted and totally contrived, this opener is Kleypas taking a sledgehammer and hitting readers over the head with our sympathy for Lucy. But Kleypas eventually dials it down a couple of notches, and in subsequent disaster scenes she manages to elicit genuine sympathy for poor old Lucy. It starts with a glass of beer spilled down her top, and then a bicycle accident… all these little/big annoyances that culminate in Lucy’s worst year.

But there’s a silver lining when she meets Sam Nolan, local wine grower and once blacklisted Nolan brother. The push-pull of their romance comes from Sam’s firm ‘no commitment’ rule, and Lucy’s personal vow that she’s swearing off men.

Despite her clunky ‘woe is me’ beginning, I did come to like Lucy. Her bad luck and unfair accidents turn her personal plights endearing, but more appealing is her decision to soldier on despite all the downhill turns, and the funny spin she puts on her romantic catastrophes;

“I don’t trust my instincts where men are concerned,” Lucy said. “It’s like this article I read the other day about the decline of the firefly population. One of the reasons they’re disappearing is because of modern artificial lighting. Fireflies can’t find the signals of their mates, because they’re so distracted by porch lights, streetlamps, illuminated sign letters…”
“Poor things,” Zöe said.
“Exactly,” Lucy said. “You think you’ve found the perfect mate and you heard for him, blinking as fast as you can, and then you find out he’s a Bic lighter. I just can’t handle that again.”

Sam was a little more ho-hum for me. He’s set-up as a big ladies man, the ultimate love em’ and leave em’ sort – but he comes across fairly watered-down, compared to his Lothario reputation. He’s no Hardy Cates, that’s to be sure. I get the impression that if this had have been one of Kleypas’s historical romances; Sam would have revelled in being a cad. But because this is contemporary romance, Sam comes across a little more ‘PC’, and the modern rule of casual ‘no-strings-attached’ relationships covers a multitude of sins. Sam was fine; he just wasn’t a stand out Kleypas hero like she normally excels at writing.

There is a touch of magic in this second book, that wasn’t in the first ‘Friday Harbor’ outing. Lucy has the ability to turn glass into living things (fireflies, hummingbirds etc). Sam also has a bit of magic behind his green thumb.

Lucy had struggled to understand how and why it happened, until she had read a quote by Einstein – that one had to live as though everything was a miracle, or as if nothing was a miracle. And then she had understood that whether she called her gift a phenomenon or molecular physics, or magic, both definitions were true, and the words didn’t matter anyway.

I was a little perplexed by the magic in ‘Rainshadow Road’. It’s not at all a focus of the book – it’s just another attribute to the characters. But it did feel cheesy – yes, yes; we know that true love is magic. But inserting actual magic into the story wasn’t terribly subtle, or clever. Lucy’s magic scenes pop up at random, and were so understated as to be forgotten – until the next glass-turned-hummingbird scene.

I was also a little disappointed in this book because it didn’t feel like Kleypas’s usual family saga. In all her past series, ‘Wallflowers’, ‘Hathaways’ and especially ‘Travis’ – past characters make endearing cameos, and readers are able to follow the progress of romances from past books. I love that in all those series, old characters pop up and we’re offered a glimpse into how their happily-ever-after is going. Less so in ‘Rainshadow Road’. Mark is present for a lot of the book, but his ‘Christmas Eve at Friday Harbor’ lady love, Maggie, is in one paltry scene – and even in that she isn’t given the opportunity to bounce off of (let alone talk to) Lucy. ‘Friday Harbor’ should feel like a real family saga – set on a small island where the Nolans have a reputation that precedes them. Alas, there’s really no sense of family in this series. Even scenes with Sam’s orphaned niece, Holly, are few and far between.

Another niggling annoyance in ‘Rainshadow Road’ was the unresolved story of Lucy’s parents. In light of Alice’s actions, Lucy’s mother consoles her heartbroken daughter with an anecdote from her own life, about how she and Lucy’s father came to be married. This is quite a revelation, and I was desperate for Lucy to chase this story up, have a heart-to-heart with her dad and get some perspective on their marriage. Kleypas sets this side-story up beautifully, but doesn’t go anywhere with it. The story of Lucy’s parents is, in some ways, even better than the Lucy/Kevin/Alice/Sam saga – and I wanted some resolution.

‘Rainshadow Road’ was okay, but I’m not nearly as enamoured of this series as other Kleypas books. It’s lacking that certain something. It’s hard to put my finger on it… this series just doesn’t have that verve or spark. I do look forward to third book ‘Dream Lake’, coming August this year. The third book is about Nolan black sheep, Alex – hopefully third time will be a charm for me with this series.
2.5/5 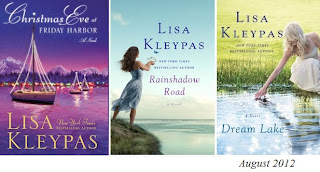