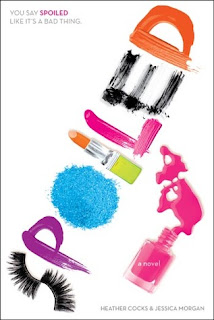 16-year-old Molly Dix loves her ordinary life in suburban Indiana, so when her single mother passes away, she is shocked to discover that her biological father is Brick Berlin, world famous movie star and red carpet regular.

Equally intrigued and terrified by her Hollywood lineage, Molly moves to Southern California and plunges head-first into the deep end of Beverly Hills celebrity life. Just as Molly thinks her new life and family couldn't get any stranger, she meets Brooke Berlin, her gorgeous and spoiled half-sister whom welcomes Molly to la-la land with a healthy dose of passive-aggressive "sisterly love."

Set against the backdrop of a sparkling and fashion-filled Los Angeles, this deliciously dysfunctional family soap opera will satisfy every reader looking for their next lifestyles-of-the-rich-and-famous beach read.

Brooke Berlin is one party away from making the Hollywood ‘it’ list. She has all the credentials – movie star daddy, tragic tale of childhood abandonment, killer good looks, enviable fashion sense and a requisite nemesis. Now all she needs is a sweet sixteen party to introduce her to the media and world stage.

Her father, action hero movie star Brick Berlin, has promised Brooke a sweet sixteen party that will make MTV viewers weep. But Brick has an even bigger surprise for his little princess… in the form of an out-of-wedlock half-sister.

This is not good news for Brooke. The only thing the media loves more than a movie star’s daughter taking to the limelight is a movie star admitting he’s had a secret love child living in the suburban backwoods of Indiana for sixteen years!

You’d think that discovering your father is a Hollywood heartthrob and red-carpet regular would be a dream come true – but not for Molly Dix. Her mother, the only family she has ever known, has just passed away and now she has to leave her home in Indiana and move to Los Angeles after learning of her real father’s celebrity-status by way of her mother’s death-bed confession.

So now Molly is moving to Beverly Hills where the girls are catty, the boys are metrosexual and her father’s high profile has put her on the paparazzi’s hit list. But that’s nothing compared to her half-sister, Brooke. Upset at being upstaged, Brooke wages a war against her yokel half-sister... it’s certainly not the welcoming Molly was expecting.

‘Spoiled’ is the young adult novel from Heather Cocks and Jessica Morgan – the hilarious fashion commentators behind the ‘Go Fug Yourself’ blog.

Anyone who has ever had the pleasure of perusing ‘Go Fug Yourself’ will not be surprised to learn that Cocks and Morgan have put their devilish comedic talents to an LA-based YA novel. The girls are just too good not to branch out beyond the blog. Their observations of red-carpet fashion are wonderfully astute, sometimes snarky and always hilarious. In 2005 ‘Go Fug Yourself’ was listed in TIME magazine’s ’50 Coolest Websites’, and in 2006 the blog made ‘Entertainment Weekly’s’ list of favourite entertainment sites. Fans and newcomers to Cocks and Morgan’s special brand of hilarity will not be disappointed with their foray into Young Adult land.

In ‘Spoiled’ the girls walk a fine line between mockery and wisdom, cynicism and tenderness. Of course their book is based in LA, so with the setting comes all the requisite mocking of the celebrities their blog has also teased. Brooke Berlin being entrenched in the Beverly Hills lifestyle leaves plenty of room for hitting-the-nail-0n-the-head observations of crazy celeb antics and superficiality;

Abandoning Brooke and Arugula, Shelby signalled the ‘Hey!’ photographer, who obligingly started snapping her as she ran over to a table where one of the lesser Kardashians was autographing a pile of three-hundred-dollar tank tops from her new line, Klothes. The girls shrieked, then hugged without actually touching.
“Something about that makes me uncomfortable,” Arugula warned in a low voice.
“I know, right?” Brooke rolled her eyes. “That family needs to buy another consonant.”


This is where Cocks and Morgan excel, obviously. But what’s wonderful is how they turn all that ridicule on its head, particularly with Brooke’s character.

Brooke hasn’t seen her mum in years; she walked out on Brooke when the relationship with Brick went belly-up. But Brooke writes lengthy unsent emails to her absentee mother. This is just the beginning of Cocks and Morgan peeling back Brooke’s layers, wiping off the glitz and glamour, the bitchy rivalries and paparazzi obsession to get to the heart of what makes this girl tick. And her journey was surprising.

Molly is a real change of pace, compared to Brooke. Not only is she dealing with the fall-out of losing her mother, moving away from her friends (and potential-maybe-boy-crush-best-friend) but she has her father’s notoriety and her half-sister’s jealousy to contend with. And the paparazzi/media obsession is a whole other ball game she is completely ill-equipped to deal with;

Brooke Berlin was the most mysterious variable in the entire scenario. Laurel had known nothing about her, and in the few short chats Molly had with Brick to discuss logistics, all he’s said was that Brooke asked for a sister for Christmas when she was eight.
“Her Wikipedia page was hilarious,” Charmaine said. “But that had to be accidental.”
“You mean, ‘Brooke Ophelia Mayflower Berlin is the regal daughter of one of Hollywood’s most cherished actor-directors, known throughout the city for her tiny ankles and tremendous talent’?” Molly recited from memory.
“You’d think any0ne who allowed the Internet to say that about her would’ve thrown in a picture,” Charmaine complained.


‘Spoiled’ is laugh-out-loud funny. If you get a chuckle (like I do) from reading the ‘Go Fug Yourself’ blog entries, then be prepared for sustained belly-aching laughs when Heather Cocks and Jessica Morgan turn their talents for witty observation to a 300+ pages young adult novel. This book is begging to be a CW-adaptation, and I cannot wait to read the second installment, ‘Messy’, coming June this year. 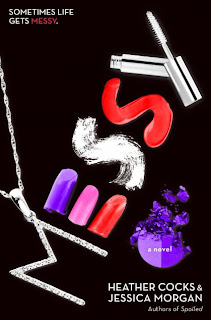