'Missing May' by Cynthia Rylant 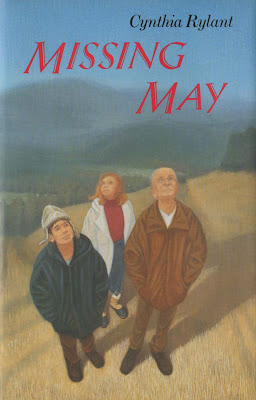 When May dies suddenly while gardening, Summer assumes she'll never see her beloved aunt again. But then Summer's Uncle Ob claims that May is on her way back--she has sent a sign from the spirit world.

Summer isn't sure she believes in the spirit world, but her quirky classmate Cletus Underwood--who befriends Ob during his time of mourning--does. So at Cletus' suggestion, Ob and Summer (with Cletus in tow) set off in search of Miriam B. Young, Small Medium at Large, whom they hope will explain May's departure and confirm her possible return.

It seems to Summer that everybody in her life leaves too soon. Her mother died when she was young, and after that she was passed around to live with relatives, to be “treated like a homework assignment somebody was always having to do,” and never staying with any relative for very long. And then Ob and May came along when Summer was six. Her aunt and uncle were elderly by the time Summer went to live with them in their Deep Water trailer, but she didn’t mind. For the first time since her mother’s death, Summer felt loved and safe. She had found a home with Ob and May, and not a moment too soon; their trailer was filled to the brim with love – May cooked big breakfasts and used to tell Summer she was the best little girl she ever did know. Ob makes whirligigs – but not the typical cartoon ones most people stick in their gardens to frighten away birds. Ob’s whirligigs are works of art – he makes fire whirligigs and storm whirligigs, and spirit ones too.

But if there’s one thing Summer knows, it’s that everything good will eventually come to an end.

May has just died – keeled over while tending to her beloved garden. Now there’s just Ob and Summer left behind, and Summer can already feel her uncle pulling away . . . he doesn’t wait with her for the bus anymore, doesn’t cook big breakfasts like May used to and he has gotten to sitting around in his pajamas all day long.

In the midst of their grief, Summer’s classmate (and resident oddball) Cletus takes to popping round for a visit. Cletus used to collect chip wrappers, now he is obsessed with photos. He and Ob get along like a house on fire; Summer just wishes she wasn’t so jealous about seeing Ob light up when Cletus comes round with his suitcase of pictures, like he’s helping to ease Ob’s grief when Summer can’t seem to do anything.

And then Ob gets a visit from May’s spirit, and Summer knows what she must do to keep Ob here with the living, where she needs him.

‘Missing May’ was the 1992 highly-acclaimed middle-grade novel from Cynthia Rylant. The book won the coveted Newbery Medal and Boston Globe-Horn Book Award.

I've become a little bit obsessed with reading Newbery and Printz books. These are two of the biggest children’s book awards in the US, and lately I have been gorging on winning and honour books recognized by these prestigious organizations. It started with ‘Vera Dietz’, progressed with ‘Frankie Landau-Banks’ and hit a high-point with ‘The First Part Last’. I especially love perusing past and recent nominee lists because I find they are full of books I would have otherwise never heard of. Take Cynthia Rylant’s incredible ‘Missing May’, for example. An old book, first published in 1992, and very short (89 pages). But ‘Missing May’ caught my eye when I perused an old list of Newberry winners, and I am so glad I went hunting for a copy to purchase online. . .  because in just 89-pages, Rylant has written a heartbreakingly beautiful book that is exquisite for its honesty and simplicity.

‘Missing May’ is a book about grief. We meet Summer shortly after her aunt May has died, leaving behind Summer and her old uncle Ob in their trailer on a hill which now feels filled to the brim with grief. As Ob sinks further and further into his grief and loneliness, Summer becomes concerned that she won’t be enough to keep Ob on this earth. Summer becomes particularly worried when Ob claims to have received a visit from May’s spirit, and becomes hell-bent on tracking down her wayward soul. Helping in the spiritual mission is Summer’s classmate Cletus; a strange young boy who touts around a suitcase full of photos, and does not find Ob’s obsession with May’s spirit the least bit strange;

Cletus never once asked why I wasn’t at school that day. Never once commented on Ob being in his pajamas.
He sure had some gifts.
May would have liked him. She would have said he was “full of wonders”, same as Ob. May always liked the weird ones best, the ones you couldn’t peg right off. She must be loving it up in heaven, where I figure everybody must just let loose. That’s got to be at least one of the benefits of heaven – never having to act normal again.


But while Summer tries to help Ob find May’s spirit, and gets to know Cletus better, she seems to be forgetting about her own grief. . .

Rylant’s novel is beautiful. I read this on the train, and I got a few odd looks from people when they saw how thin the book was (with clearly a children’s front cover). I bet those same commuters found it especially odd when tears welled up in my eyes and I quietly sniffled through the last pages. That’s the thing about ‘Missing May’ – it may be only 89-pages, but Rylant has filled her book with such achingly precise observations of grief and missing, that 89 pages is all she needed to move me. I felt the same way about Angela Johnson’s (Printz-winning) novel ‘The First Part Last’ – “it takes a true maestro to move a reader to tears with a word-count that some authors spend on first chapters alone.”

Summer’s story is told with the utmost patience and care by Rylant, who has written a wise young narrator in Summer. She is a young girl who has had more than her fair share of heartache – from losing her mother to feeling rejected by nearly all her relatives . . .  all, except Ob and May. Summer’s aunt and uncle were the best kind of people – they didn’t have much, but what they did have they gave to Summer – all their love, care and attention was heaped on her, until it almost felt like all the pain she had previously gone through was worth it, to end up in that trailer on the hill with May’s big hugs and Ob’s whirligigs.

Everybody should read Cynthia Rylant’s ‘Missing May’ – it doesn’t matter if you’re young or old, this is a book which beautifully and painfully communicates the ache of missing and the hopelessness of grief. Beautiful, beautiful, beautiful. 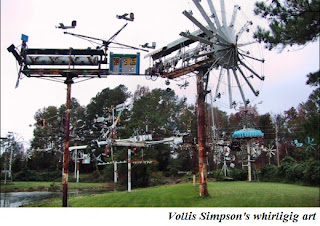